Discoveries in microbial genetics have provided the basis for the discipline of molecular genetics, which is concerned with the analysis and manipulation of DNA using biochemical and microbiological techniques. It has been stated that these techniques have revolutionized the study of biology and medicine, probably more than any technique since the development of the light microscopes. Some techniques and applications of molecular genetics are discussed below.
Genetic Engineering
Genetic engineering is a method of inserting foreign genes into a bacterium and obtaining chemically useful products. Genetic engineering, also known as recombinant DNA (rDNA) technology, uses the techniques and tools developed by the bacterial geneticists to purify, amplify, modify, and express specific gene sequences. The use of genetic engineering and “cloning” has revolutionized biology and medicine. 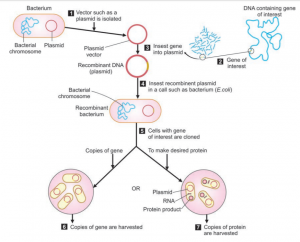 This consists of isolation of the genes coding for any desired protein from microorganisms or from cells of higher forms of life including human beings, and their introduction into suitable microorganisms, in which the genes would be functional, directing the production of the specific protein. Such cloning of genes in microorganisms enables the preparation of the desired protein in pure form, in large quantities and at a reasonable cost.
Basic Tools of Genetic Engineering
1. Cloning vectors
2. Restriction enzymes
3. DNA ligase.
1. Cloning vectors:Cloning vectors can be used to deliver the DNA sequences into receptive bacteria
and amplify the desired sequence. Many types of vectors are currently used such as plasmid vectors,
bacteriophages and other viruses, cosmid vectors, and artificial chromosomes.
2. Restriction endonucleases (restriction enzymes): These are used to cleave DNA reproducibly at defined sequences. Restriction enzymes are microbial enzymes which cleave double-stranded DNA at
specific oligonucleotide sequences. Restriction enzyme recognizes and cuts, or digests, only one
particular sequence of nucleotide bases in DNA, and it cuts this sequence, in the same way, each time. These enzymes are present in many prokaryotes organisms. e.g. restriction endonuclease Eco RI, Hind Ill, Bgl H, Pst 1 and Sma 1 are obtained from E. coli, H. influenzae,B. globigii, Provindentia stuarti and Serratia marcescens respectively.
3. DNA ligase: The enzyme that links the fragment to the cloning vector.

Application of Genetic Engineering
Genetic engineering has been used to isolate and express the genes for useful proteins in bacteria, yeast, or even insect cells and has become an established branch of biotechnology with great scope for commercial exploitation.
1. Production of vaccines: Foot and mouth disease, hepatitis B and rabies viruses.
DNA vaccine: In the future, it may be sufficient to inject plasmid DNA capable of expressing the  desired immunogen (DNA vaccine) into an individual to let the host cells express the immunogen
and generate the immune response.
2. Production of proteins of therapeutic interest: Human growth hormones, human insulin, erythropoietin, blood clotting factor VIII, tissue plasminogen activator, interferons, tumor necrosis factor, interleukin-1, 2 and 3, granulocyte colony stimulating factor, epidermal growth factor, fibroblast
growth factor, somatostatin, growth hormones are proteins of therapeutic interest. Cloned human insulin, interferons, somatostatin, growth hormones and many other biologicals have already been marketed.
3. Gene therapy: Genetic diseases can be cured by introducing normal genes into the patient.
4. Others: It has also become essential to laboratory diagnosis, forensic science, agriculture, and many
other disciplines