Morphology and Ultrastructure of Actinomycetes

Actinomycetes (Gk. mykes – fungus; actis – ray) pertain to the bacterial order Actinomycetales, family Actinomycetaceae, and genus Actinomyces. More than 35 microbial species are known in this genus, among them are A. viscosus, A. bovis, A. israelii, and many others.

Actinomycetes are organized as the large complex of thin rod-like cells and long branching filaments that make air and substrate mycelium. Mycelium of actinomycetes is composed of non-septated filamentous cells or hyphae. Mycelial cells germinate by spores.

Unlike fungi, actinomycetes are prokaryotic microorganisms without nucleus. As for all of the bacteria, they contain nucleoid as the main genomic structure. Actinomycetes have firm and thick cell wall that leads to their gram-positive stain. Many of these bacteria synthesize pigments of various colors.

The reproduction of actinomycetes is performed by germinating spores located within the sporulating hyphae or sporophore, and by direct fragmentation of hyphae.

When the culture of actinomycetes becomes senescent, the cells of bacteria accumulate cytoplasmic vacuoles, granules, and various inclusions (fats, starch, etc.). Their mycelium becomes brittle and easily breaks down, followed by partial lysis of microbial cells.

In humans actynomycetes cause the specific inflammatory disease, generally known as actinomycosis.

Other families of the order Actinomycetales also harbor pathogenic representatives that cause serious human disorders. For instance, certain pathogenic mycobacteria from Mycobacteriaceae family are the agents of tuberculosis, leprosy and mycobacterioses; the basic member of Corynebacteriaceae family C. diphtheriae causes diphtheria; the members of the family Nocardiaceae are the agents of nocardioses.

Numerous representatives of the family Streptomycetaceae (more than 500 bacterial species) are the valuable sources for antibiotic substances. 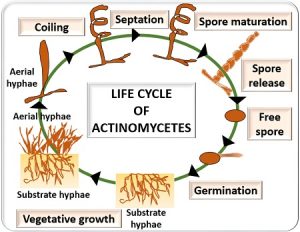