Morphology and Ultrastructure of Fungi 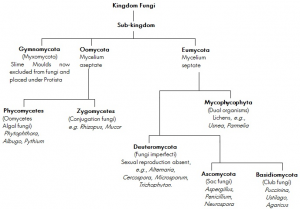 Fungi (Lat. fungus – a mushroom) are heterotrophic microbial representatives of eukaryotic organisms. They contain a differentiated nucleus separated from cytoplasm by nuclear membrane.

Overall, the current number of registered fungal species is extremely high – about 100 000 species are well-defined to date, being described in details. And the estimated total number of fungi inhabiting the Earth is conceived now in the range from 1 to 5 mln species.

Many fungal representatives are not perfectly classified yet on the ground of monophyletic principle. For instance, the numerous order Mucorales that harbors more than 300 species and certain human pathogens stays beyond 7 delineated fungal phyla. Previously this order belonged to former phylum Zygomycota that is newly re-classified as phylum Glomeromycota.

Fungi are hall-marked by their variable structure. In vegetative stage a complex body of fungus, which embraces many cellular elements, is termed as thallus.

There are two basic types of fungal thallus – mycelial and yeast.

The mycelium is composed of multiple long cellular filaments or hyphae.

In general, two kinds of mycelium are described – substrate and air mycelium, or according to its function – vegetative and reproductive mycelium.

In several groups of fungi the mycelium is unicellular or non-septate (i.e., without cross-walls).

The highest multicellular fungi have the cross-walls that separate the cells within mycelium (septate mycelium).

Yeast thallus is composed of many groups of single fungal cells that arise from their progenitor cells by budding.

Thus, the yeasts are oval or rounded unicellular fungi devoid of mycelium.

The fungi, capable of changing their morphology from yeast to mould mycelial forms and vice versa, are termed as dimorphic.

Fungal cells are covered by rigid multi-layered cell wall. Their external layers consist of various hydrophilic substances, such as glycoproteins and α-glucans. Inner sheets of the cell wall are insoluble in water and contain chitin – non-branching polymer of β-1,4-linked N-acetylglucosamine, and β-glucans (e.g., cellulose). Cytoplasmic membrane of fungi is enriched with extra amounts of sterols, predominantly of ergosterol, which is the primary target for many anti-fungal drugs.

Fungal cytoplasm contains the whole number of organelles, including ekaryotic 80S ribosomes, mitochondria and differentiated nucleus or nuclei. Hence, fungal cells might be mononucleate or polynucleate. Unlike in prokaryotes (e.g., in bacteria), fungal genome has exon-intron organization that is realized via RNA splicing.

Numerous inclusions can be found in the cytoplasm of fungi: volutin, drops of fat, starch granules, etc.

Mycelial fungi have sexual and asexual reproduction with sporulation or framentation of hyphae. Yeasts can reproduce by budding or binary fission.

Various ecological groups of fungi comprise the large mass of environmental saprophytes, as well as parasites or facultative parasites that affect plants, animals and humans.

The fungi from the order Mucorales have unicellular (non-septate) vegetative and reproductive mycelium. These mould fungi are broadly spread in nature. Many species are saprophytic, living in the soil and water, or upon plants.

The typical genus Mucor or bread mould have long branching mycelial cells. Among them are fruiting hyphae or sporangiophores finished with head-like dilatations or sporangia. Sporangia contain numerous endospores that account for vegetative reproduction. These fungi are also capable of sexual reproduction.

In rare cases the fungi of the certain genera of the order Mucorales (e.g., Apophysomyces, Rhizopus or Absidia) can cause human diseases known as mucormycoses. These disorders demonstrate severe manifestations with predominant damage of brain and lungs.

Ascomycetes or sac fungi include more than 60 000 fungal species. They are composed of a multicellular mycelium.

These fungi have sexual reproduction with ascospores (the spores, carried within the special case, or asc). Also ascomycetes have asexual reproduction by means of exospores. Exospores make long chains or conidia (Gk. konidion – particle of dust) on the ends of sporulating hyphae.

The members of the genus Aspergillus are the typical representatives of ascomycetes. Aspergilli have septate vegetative mycelium, and a unicellular reproductive hyphae or conidiophores. On the ends of conidiophores a fan-like rows of short pedestals or sterigmata are finished with the terminal chains of spores – conidia.

Microscopy of these fungi demonstrates that the arrangement of conidia someway resembles the jets spurting out from a watering can; that’s why aspergillus is often called as the sprinkler mould by its morphology.

A vast number of aspergillus species is widespread in nature. Among them are A. flavus, A. niger, A. fumigatus and many others.

In some cases, especially in predisposed patients with chronic bronchopulmonary diseases, these fungi (such as A. fumigatus) cause specific infection or aspergillosis. It is a severe disorder that affects lungs demonstrating tendency to chronic course and invasive spread.

The genus Penicillium also belongs to ascomycetes. The fungi of this genus have both multicellular and septate vegetative and reproductive mycelium. Their sporulating hyphae with conidia resemble a brush; hence, these fungi are termed as brush moulds. Like other ascomycetes, penicillium representatives are common habitants of external environment. They contaminate the surfaces of moist objects, plant and animal-derived matters, various foodstuffs, e.g. dairy products, jam, or bread.

Certain species (Penicillium notatum, Penicillium crustosum and some others) are the active producers of β-lactam antibiotics (penicillin group).

The yeasts fungi pertain to the phylum Ascomycota and the order Saccharomycetales. They produce large round-shaped or oval cells. Yeasts have well-defined nucleus. The cytoplasm of yeasts contains numerous inclusions (volutin, starch, lipids). They multiply by sporulation, budding, or binary fission. Some yeast species are capable of sexual reproduction.

In the process of sporulation the true yeasts produce from 2 to 16 endospores located inside the cells. The yeast cell harboring the ascospores is termed as ascus.

Some yeast species are reproduced by continious budding, where the buds are not easily separated and make elongated chains. The progressive budding without bud detachment results in formation of elongated yeast chains called as pseudohyphae (or pseudomycelium). Such species are often termed as yeast-like fungi.

One genus of yeast-like fungi, Candida, includes the causative agents of high-rate opportunistic mycosis – candidiasis. The main causative species of candidiasis is C. albicans; more seldom this infection is caused by C. parapsilosis, C. glabrata or other candidae. In most of clinical situations candidiasis ensues from the suppression of the normal human microflora by massive antibiotic treatment. At the same time it may develop from severe secondary immunosuppression, like in AIDS patients.

A mass of yeasts species demonstrate the excellent capacity of fermentation of various carbohydrates. Thus, for a long time they are broadly used in food industry in bread baking, beer brewing, or wine making. The most common representative of such yeasts is Saccharomyces cerevisiae species.

Basidiomycetes are the mushroom-producing fungi with multicellular mycelium and fruiting bodies. They are reproduced sexually by means of basidiospores (basidiae – special reproductive organs in these fungi, where a certain number of spores is developed). In natural conditions they occupy the decaying humus, being in symbiosis with trees and other plants. The ample number of species are tree parasites. The fruiting bodies (or mushrooms) of many basidiomycetes can be used as food. About two hundred species of mushrooms are edible but dozens of them are poisonous and may cause severe food poisoning.

Deuteromycetes or Fungi imperfecti is an artificial grouping of a large set of fungi that consist of a multicellular mycelium without the asco- or sporangiophores, but carrying only the conidia. Their reproduction is asexual, sexual reproduction (teleomorph) is not discovered.

Most of medically relevant fungi are easily discriminated according to their morphological properties by standard methods of optical micoscopy.

Similarly, the majority of fungal species are successfully cultivated on liquid Sabouraud broth or solid medium Sabouraud agar that contain elevated concentrations of glucose (up to 3%) and peptone. 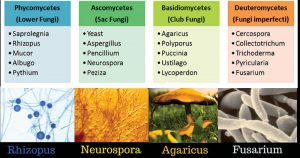