Morphology and Ultrastructure of Mycoplasmas

The mycoplasmas pertain to the separate phylum Tenericutes, class Mollicutes and the order Mycoplasmatales.

Mycoplasmas are the smallest bacterial representatives, usually 100-200 nm in size; larger microbial forms up to 500-700 nm can be found.

They don’t produce spores or capsules; certain members of Ureaplasma genus may have flagella.

The outstanding feature of mycoplasmal cells is the absence of the cell wall in these bacteria. Phylogenetic analysis revealed that mycoplasmas initially originated from gram-positive ancestor bacteria after gradual loss of essential genes responsible for the cell wall synthesis.

Because of the cell wall absence, mycoplasmas are highly polymorphic microbials. They produce granular, coccoid, rod-like, clustered, pseudomycelial, and filamentous forms. As the substitute of the cell wall, the bacteria possess thick triple-layered cytoplasmic membrane.

At first mycoplasmal infections were detected by E. Nocard and E. Roux, who studied the infectious agents of pneumonia in cattle. The putative causative agent was invisible in light microscope and not cultured on conventional nutrient media. Thus, it long was ascertained as virus, especially as it easily penetrated through standard bacterial filters. Only in 1944 M. Eaton isolated mycoplasma from sputum of patients with pneumonia.

There are many free-living as well as pathogenic species of mycoplasmas. They inhabit the soil, sewage waters, various organic matters, and the living bodies of plants, animals and humans.

The most common pathogenic representatives are Mycoplasma pneumoniae – the causative agents of pneumonia and other respiratory infections, and M. hominis, M. genitalium, Ureaplasma urealytica and Ureaplasma parvum that may induce infections of urogenital tract. The latter group of bacteria can occasionally cause meningitis in newborns. 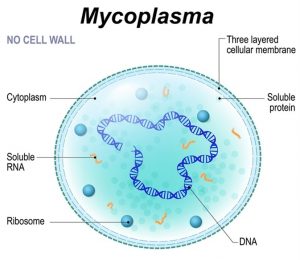