Morphology and Ultrastructure of Rickettsiae

Rickettsiae are placed into the order Rickettsiales that contains the family Rickettsiaceae.

Rickettsiae pertain to obligate intracellular parasites. They live and multiply within the cytoplasm or nuclei of cells from different tissue types.

Rickettsiae are pleomorphic organisms. Coccoid forms look like tiny single-grain ovoids with the diameter about 0.5 μm; quite often they produce diploforms.

Rod-like rickettsiae make short rods of 1 to 1.5 μm in length with granules on the ends, or they render longer thin curved rods of 3-4 μm.

Filamentous forms are present as the long threads in the range of 10-50 μm in length; in some cases they might be curved.

Rickettsiae have no spores, capsules or flagella.

Electron microscopy revealed that rickettsiae possess inner and an outer membranes with elements of peptidoglycan. Their cytoplasm contains bacterial ribosomes.

For growth and reproduction rickettsiae are cultured within living cells – laboratory cell lines, or embrionated chicken eggs within yolk sacs. Zoonotic rickettsia can be cultured in laboratory animals, e.g. guinea pigs. The bacteria are stained with aniline dyes; for instance, by Romanowsky-Giemsa stain.

There are several specially devised staining methods for examination of rickettsiae. Zdrodovsky method with carbol fuchsin (as modified Ziehl-Neelsen stain) makes rickettsiae red on the blue background of cellular cytoplasm and nuclei. Similar to this technique is Gimenez stain that renders rickettsiae red by fuchsin inside blue-green cellular background made by malachite green. 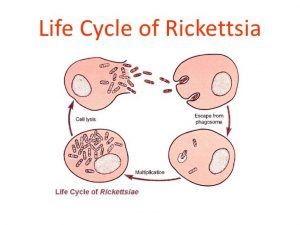