Morphology and Ultrastructure of Spirochetes

Spirochetes (Lat. spira – curve, Gk. chaite – mane) demonstrate the structure, distinct from other bacteria. They make spiral cellular forms with a corkscrew shape. Their sizes are in the ranges from 0.2 to 1.5 μm in width and from 5-10 to more than 100 μm in length. Spirochetes have an axial filament with the cytoplasm wound around this filament in spiral manner. The bacteria possess triple-layer outer membrane. Electron microscopy revealed a thin cytoplasmic membrane enwrapping the cytoplasm.

Spirochetes lack capsules or spores, but they may produce cysts at worse environmental conditions. Also they are devoid of external flagella, but carry axial filaments or endoflagella located within periplasmic space. Endoflagella are attached to the end of microbial body providing nimble bacterial motility.

The active motility of spirochetes is also maintained by easy flexibility of their thin spiral cells. Spirochetes demonstrate a rotating motion around the axis of microbial cell; an undulating motion that involves the whole body of the bacteria, and a bending motion with the microbial body bendings at various angles.

The methods studying the morphology of spirochetes comprise the number of staining techniques and the methods for detection of live bacteria primarily based on their active motility (e.g., dark-field or phase-contrast microscopy).

Romanowsky-Giemsa stain is broadly used for differentiation of certain spirochetal groups. In general, many species of spirochetes poorly absorb aniline dyes because of their high lipid contents. Nevertheless, some bacteria easily stain blue or blue-violet, some – pink or pale-pink, several may remain literally unstained.

All these bacteria are gram-negative due to their thin cell wall with minimal peptidoglycan. An ultra-sensitive method of stain for spirochetes is performed by silver impregnation. Basic taxnomical division of spirochetes includes the order Spirochaetales with its two main families Spirochaetaceae and Leptospiracea. These families compise three genera with human pathogenic reprsentatives: Borrelia and Treponema that both belong to the family Spirochaetaceae, and Leptospira genus from the family Leptospiraceae.

The pathogenic members of spirochetes can be discriminated according to their distinct morfological and tinctorial properties. Also they are easily detected by dark-field or phase-contrast microscopy.

The bacteria of genus Borrelia look like large rough spirals with the obtuse-angled irregular coils. The number of coils usually varies from 3 to 8-10. The bacteria possess many (from 10 to 30-40) periplasmic fibrillas (endoflagella).

Borrelia stain blue-violet with Romanowsky-Giemsa stain due to the relatively high contents of nucleoproteins within microbial bodies.

Pathogenic borrelia cause anthroponotic human disease known as epidemic relapsing fever that is transmitted by lice. The causative agent of this infection is Borrelia recurrentis. Also they cause zoonotic endemic relapsing fevers that may affect humans. These infections are spread by ticks being caused by multiple borrelial species (Borrelia persica, B. hispanica, B. duttonii, etc.).

The bacterial ends can be tapered or rounded. Treponemas possess tender triple-layered outer membrane that is poorly resistant to external influences. It is composed of lipids and proteins. Treponemal cell walls have few amounts of peptidoglycan.

Within unfavorable surroundings the bacteria can produce cysts.

Treponemas render pale-pink with Romanowsky-Giemsa stain. They can be detected by silver stain. Active motility of treponemas fosters their determination by dark-field and phase-contrast microscopy.

Treponema pallidum – the causative agent of syphilis – is a typical representative of treponemas.

The bacteria from the genus Leptospira (Gk. leptos – thin, speira – coil) demonstrate very thin cellular structure. They are composed of the large number of primary coils (12-18 or more) that are very tightly wound to each other. Being supercoiled, leptospira form secondary twists, resembling letters C or S under microscopy. The cells display hook-like or spiral-shaped ends.

The bacteria carry two axial filaments, which are attached to the basal bodies at opposite ends of the cells. They protrude toward each other from the cellular ends. The middle of the bacteria is lack of axial filaments.

Endoflagella provide complex and active motility of leptospiras. They render rotational movements where the ends of microbial cells rapidly rotate at a right angles to the axis of microbial body.

Due to the tight packing and excessive lipid contents the leptospiras are poorly stained. They may become slightly pinkish when stained with Romanowsky-Giemsa’s method. The methods of choice for their determination are dark-field and phase-contrast microscopy. 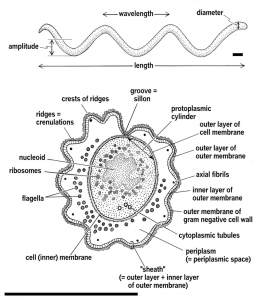