The highly specialized nerve cells are the in-charge of transmitting both chemical and electrical information. In the human body, many different types of neurons are responsible for various tasks.

Sensory neurons bring input to the brain from sensory receptor cells all over the body. Motor neurons are neurons that relay information from the brain to the body’s muscles. Interneurons are responsible for sending and receiving information between neurons in the body.

A neuron is a nerve cell that serves as the nervous system’s basic building block. In certain ways, neurons are identical to other cells in the human body, but there is one significant distinction between neurons and other cells. Neurons are specialized cells that transmit data across the body.

Think of a neuron-like tree for a good analogy. Dendrites, an axon, and a cell body or soma are the three main parts of a neuron, which can be compared to the branches, roots, and trunk of a tree, respectively. A neuron’s dendrite receives feedback from other cells. Dendrites functions much like tree branches do, they also have spines which are leaf-like structures. The axon is the neuron’s output structure; when a neuron needs to communicate with another neuron, it sends an action potential through the entire axon. The nucleus, which houses the neuron’s DNA, and where proteins are made to be distributed around the axon and dendrites, are both located in the soma. 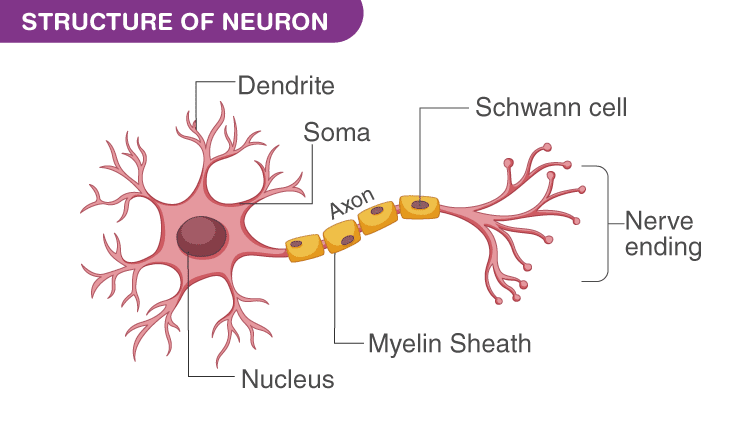 Neurons have a unique structure and organization that enables them to send and receive signals in the form of electric impulses from the brain to the body and back. Individual neurons can send signals from their dendrites to their axon terminals; however, neurons are arranged in long chains at a higher level, allowing them to send signals very rapidly from one to the other. At the synapse between them, one neuron’s axon can chemically bind to another neuron’s dendrite. Electrically charged chemicals flow from the axon of the first neuron to the dendrite of the second neuron, and then from the second neuron’s dendrite, down its axon, through a synapse, into the dendrites of a third neuron, and so on.

Scientists divide neurons into three groups based on their function: Sensory, Motor, and Interneurons.

Sensory neurons assist you in the following ways:

Physical and chemical signals from your surroundings activate sensory neurons.

Movement, both voluntary and involuntary, is regulated by motor neurons. The brain and spinal cord can interact with muscles, organs, and glands all over the body, Thanks to these neurons.

As the name implies, Interneurons are the bridges that bind spinal motor and sensory neurons. Interneurons can interact with each other and form circuits of varying complexity in addition to transmitting signals between sensory and motor neurons. They are multipolar, like motor neurons.

Neurons in the brain

The differentiation between types of neurons in the brain is even more complicated. While we could easily differentiate neurons in the spinal cord based on their role, this is not the case in the brain. Brain neurons involved in sensory perception, such as those in the visual or auditory cortex, and motor processing. Similar as those exist in the cerebellum or motor cortex. These neurons have different electrical properties, shapes, expressions of different genes, projection patterns, and inputs. To put it another way, a neuron type can be described by a specific set of characteristics.

Although science has progressed our understanding of neurons over the last century, there is still a lot we don’t know. For instance, until recently, scientists assumed that neuron formation took place in adults in the hippocampus, a brain area. Memory and learning are also supported by the hippocampus. However, according to a recent report Hippocampal neurogenesis is being called into question. Researchers concluded that adults develop relatively few new hippocampal neurons after examining hippocampus samples from 37 donors. Even though they have yet to be verified. Many scientists believed that neurogenesis could aid in the treatment of diseases like Alzheimer’s and Parkinson’s, which cause neuron death and damage.