Non-sporeforming anaerobic bacteria cause a great variety of bacterial infections. Usually they affect human tissues together with facultative anaerobic and aerobic microflora. Anaerobic bacteria dominate in several body compartments, primarily in the oral cavity and gastrointestinal tract but even the infections of respiratory tract are proven to be of polymicrobial origin, where anaerobes occur in more than 50% of cases.

Since most of non-sporeforming anaerobes are normal representatives of human flora, they can induce infectious inflammation only in high concentrations, or within normally sterile body cavities and compartments, in immunocompromised patients, etc. Nosocomial strains of these bacteria demonstrate enhanced virulence and multidrug antibiotic resistance. 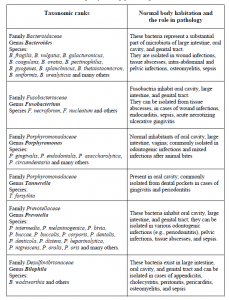 Pathogenesis of Infections caused by Non-sporeforming

Treatment and Prophylaxis of Anaerobic Infections