The causative agent of whooping cough Bordetella pertussis was discovered and isolated from patients in pure culture by J. Bordet and O. Gengou in 1906.

Structure and Properties of Bordetellae 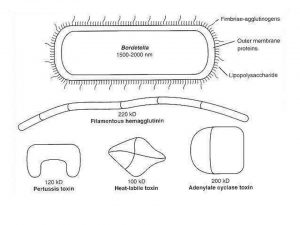 B. pertussis is sensitive to environmental factors. Nevertheless, it can withstand exposure to sunlight for about one hour. The bacterium is inactivated by heating at temperature of 56°С for 10-15 minutes. It is rapidly destroyed in solutions of conventional disinfectants (e.g., phenols or chlorines).

Treatment and Prophylaxis of Whooping Cough