▶The History of Discovery

Finally, in 1916 the Brazilian pathologist H. da Rocha-Lima, who has been working in close collaboration with S. Prowazek, thoroughly investigated the newly discovered bacteriae, revised all collected data and finally established these organisms as the causative agents of epidemic typhus. He termed them Rickettsia provazekii in honor of H. Ricketts and S. Prowazek, who both died, investigating this life-threatening disease.

Further it was found that rickettsioses comprise a numerous group of arthropod-borne diseases. Today they are regarded as the emerging diseases because of 19 currently known rickettsioses more than 10 were discovered in last 20-25 years.

Until quite recently the family Rickettsiaceae encompassed a great variety of pathogenic bacteria. Later many of them were organized into separate taxa, which became the members of new bacterial families and even classes.

Only the members of the first family are regarded now as the causative agents of rickettsioses.

The main rickettsial pathogens and their diseases are listed in table 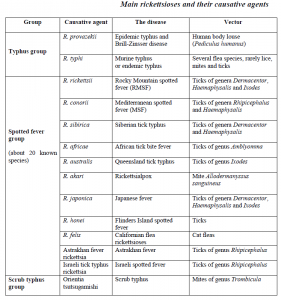 Pathogenic species from the family Anaplasmataceae pertain to genera Anaplasma and Erlichia.

▶Structure and Properties of Rickettsiae

Rickettsiae are pleomorphic gram-negative bacteria. Coccoid forms are about 0.5 μm in size. Rod-shaped rickettsiae also demonstrate substantial polymorphism; short organisms of 1 by 1.5 μm as well as long or curved thin rods 3-4 μm in size occur. The thread-like or filamentous forms are up to 40 μm in length.

All rickettsiae are obilgate intracellular parasites.

Typhus group (TG) rickettsiae are localized exclusively in the cytoplasm of affected cells, while spotted fever group (SFG) rickettsiae can invade the cell nuclei, as they possess intracellular motility due to cellular actin polymerization.

For primary isolation various cell cultures both of tick and mammalian origin are used. Bacterial generation time is about 8-10 hours. Less fastidious is the cultivation of rickettsiae in yolk sacs of embryonated eggs. For animal inoculation guinea pigs, rats and mice are used.

Rickettsiae are capable of producing gram-negative cell wall that is composed of peptidoglycan with muramic and diaminopimelic acids.

In the course of infection the main deleterious effects of rickettsiae are related with their active propagation inside the infected cells, followed by cell destruction and severe inflammatory response.

In normal conditions rickettsiae can survive only in the body of infected host, vector or microbial reservoir. They rapidly lose viability in the natural environment. Dried bacteria usually stay viable for about 5-6 days.

Treatment with ordinary disinfectants and as well as heating at 80oС destroys rickettsiae within several minutes, heating at 100oС cause immediate microbial death.

Most severe disorder, epidemic typhus, is caused by R. provazekii and transmitted by body louse.

Epidemic typhus is the anthroponotic disease, which follows social disasters (wars, starvation, socioeconomic disorganization with substantial lack of hygienic conditions, etc.) It is believed that epidemic typhus has caused even more deaths than all the wars in human history.

Humans are the main sources of infection. The patients are contagious at fever period and within the week after. The persons, recovered from typhus, retain some viable bacteria for the whole life, thus maintaining the persistent infection.

Feeding louse becomes infected and within 4-5 days can spread the disease. Nevertheless, lice are lack of transovarial transmission of rickettsiae.

Incubation period of epidemic typhus is about 2 weeks (6 to 24 days) after primary inoculation.

When untreated, the disease fatality is about 10-30% at the peak of the infection.

However, rickettsiae can stay viable within phagocytes for many years, thus provoking the relapse of epidemic typhus (or Brill-Zinsser disease) in elderly persons.

Endemic or murine typhus is similar but much milder zoonotic rickettsial disease, caused by R. typhi. Ubiquitous rats and mice are the main reservoirs and sources of this infection in nature. The disease is transmitted by various arthropod vectors (several flea species, lice, mites, and ticks). In fleas transovarial transmission is possible.

Scrub typhus is caused by Orientia tsutsugamishi, and transmitted by mites of genus Trombicula. It is found in Asia, including India and Japan, and in northern Australia.

The disease is generally similar with epidemic typhus, but the patients reveal the eschar in the primary site of mite bite followed by progressing lymphadenopathy and lymphocytosis.

Rodents are the main sources of infection.

These disorders are generally characterized by fever, headache, rash, and eschar; the latter appears in the most of the diseases.

▶Laboratory Diagnosis of Epidemic Typhus and Other Rickettsioses

Direct detection of rickettsiae in biopsy specimens and arthropod material is possible by immunofluorescence or molecular tests, e.g. PCR.

For culture the specimens are inoculated into yolk sacs of embryonated eggs, various cell lines of tick or mammalian origin, or into susceptible animals, e.g. guinea pigs, mice, etc. Isolation is made only in reference laboratories with appropriate biosafety level.

Inoculation of male guinea pigs with patient’s blood makes it possible to discriminate endemic typhus from epidemic disease. Once infected with R. typhi, animals display specific periorchitis (the scrotal swelling) due to rickettsial propagation in the coats of guinea pig testis.

▶Specific Prophylaxis and Treatment of Epidemic Typhus and Other Rickettsioses

A single dose of 200 mg of doxycycline is effective for prevention of epidemic fever, thus any suspected case should be treated immediately. Fluoroquinolones are administered in spotted fevers. Treatment with chloramphenicol and macrolides is also possible.

Nevertheless, rickettsiae have intrinsic resistance to β-lactams and aminoglycosides and low sensitivity to sulfonamides.

Various live, formaldehyde-treated, and chemical vaccines are used for specific prophylaxis of epidemic typhus and other rickettsioses in the centres of disease outbreak or epidemic. 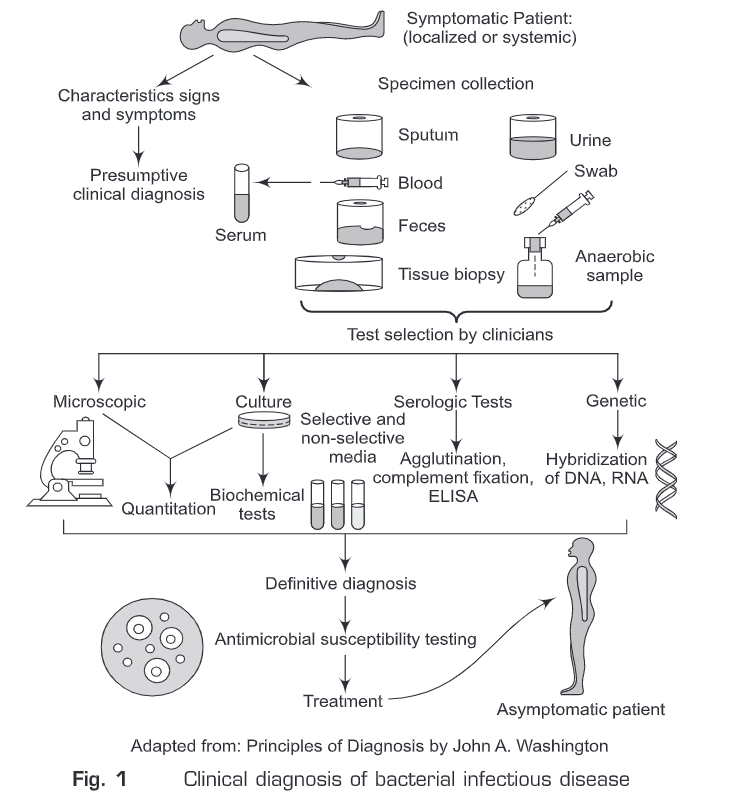