The pituitary gland is also called as hypophysis or Master Gland. This is known as master gland as it not only secretes many hormones but also regulates the function of other hormone-secreting glands. It releases nine important hormones – ACTH (Adrenocorticotrophic hormone), TSH (Thyroid Stimulating Hormone), LH (Luteinising Hormone), FSH (Follicle Stimulating Hormone), PRL (Prolactin), GH (Growth hormone), MSH (Melanocyte Stimulating hormone), ADH (Antidiuretic Hormone), Oxytocin. Hence it can be concluded why pituitary gland is the master gland. All are peptide hormones which bind to membrane (extracellular) receptors. Most of them use cyclic-AMP as the second messenger.

▶The Location and Anatomy of the Pituitary Gland

The hypothalamus is a small region present directly above the brain stem. This manipulates the hormone release by controlling the pituitary gland. 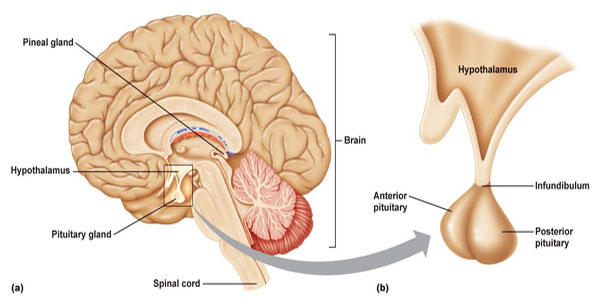 It is controlled by regulatory hormones from hypothalamic neurons. The hypophyseal portal system transports hypothalamic hormones directly to anterior pituitary target cells. It is regulated by negative feedback control. 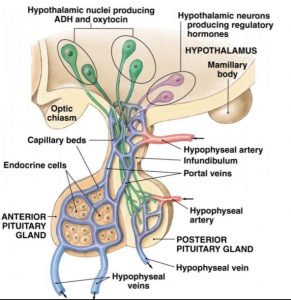