The word plague conjures up visions of death and morbidity, unlike any other infectious disease. Although pandemics of plague have probably occurred since antiquity, the first one that was reliably chronicled killed an estimated 100 million people in the 6th century AD. The last great pandemic occurred in the late 1800s and was transmitted around the world, primarily by rat-infested ships. The disease was brought to the United States through the port of San Francisco around 1906. Infected rats eventually mingled with native populations of rodents and gradually spread the disease throughout the West and Midwest.

Three possible manifestations of infection occur with the bacterium causing the plague. Pneumonic plague is a respiratory disease. In bubonic plague, the bacterium, which is injected by the bite of a flea, enters the lymph and is filtered by a local lymph node. The infection causes inflammation and necrosis of the node, resulting in a swollen lesion called a bubo, usually in the groin or axilla. The incubation period lasts 2 to 8 days, ending abruptly with the onset of fever, chills, headache, nausea, weakness, and tenderness of the bubo. Mortality rates, even with treatment, are greater than 15%. These cases often progress to massive bacterial growth in the blood termed septicemic plague. The presence of the bacteria in the blood results in disseminated intravascular coagulation, subcutaneous haemorrhage, and purpura that may degenerate into necrosis and gangrene. Mortality rates, once the disease has progressed to this point, are 30% to 50% with treatment and 100% without treatment. Because of the visible darkening of the skin, the plague has often been called the “black death.” 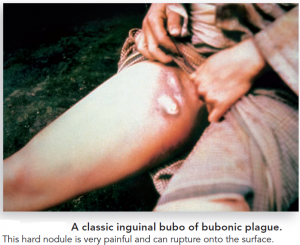 The cause of this dreadful disease is a tiny, harmless-looking gram-negative rod, Yersinia pestis, a member of the Family Enterobacteriaceae. Other species members are Y. enterocolitica and Y. pseudotuberculosis. These species cause gastrointestinal tract diseases in humans. Y. pestis displays unusual bipolar staining that makes it look like a safety pin. 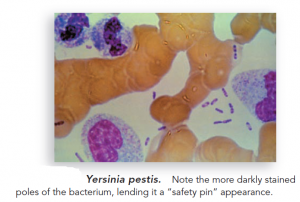 The number of bacteria required to initiate a plague infection is small—perhaps only 3 to 50 cells. Much research has been conducted on the differences between the two Yersinia species that cause GI tract disease and this Yersinia because it has such different effects on the host. Scientists have discovered that Y. pestis carries additional genes that help it to cause disease in mice and to survive in the flea vector. Examples of these genes include a gene for capsule formation and a gene for plasminogen activation (similar to the streptokinase expressed by S. pyogenes). Plasminogen activation leads to clotting, which helps the microbe resist phagocytosis.

The principal agents in the transmission of the plague bacterium are fleas. These tiny, blood-sucking insects have a special relationship with the bacterium. After a flea ingests a blood meal from an infected animal, the bacteria multiply in its gut. In fleas that effectively transmit the bacterium, the oesophagus becomes blocked due to coagulation factors produced by the pathogen. Being unable to feed properly, the ravenous flea jumps from animal to animal in a futile attempt to get nourishment. During this process, regurgitated infectious material is inoculated into the bite wound.

The plague bacterium exists naturally in many animal hosts, and its distribution is extensive. Although the incidence of the disease has been reduced in the developed world, it has actually been increasing in Africa and other parts of the world. Plague still exists endemically in large areas of Africa, South America, the Mideast, Asia, and the former Soviet Union, and it sometimes erupts into epidemics such as the outbreak in India in the 1990s that infected hundreds of residents.

This new surge of cases was attributed to increased populations of rats following the monsoon floods. In the United States, sporadic cases (usually less than 10 per year) occur as a result of contact with wild and domestic animals. This disease is considered endemic in U.S. western and southwestern states. Persons most at risk for developing plague are veterinarians and people living and working near woodlands and forests. Dogs and cats can be infected with the plague, often from contact with infected wild animals such as prairie dogs.

Human cases have been traced to a chain of events involving a flea from a prairie dog moving to a domestic cat, and then a flea from the cat moving to a human. The epidemiology of plague is among the most complex of all diseases. It involves several different types of vertebrate hosts and flea vectors, and its exact cycle varies from one region to another. Humans can develop plague through contact with the fleas of wild or domestic or semi-domestic animals.

Contact with infected body fluids can also spread the disease. If a person has breaks in the skin on his or her hands, handling infected animals or animal skins is a possible means of transmission. (Persons with the pneumonic form of the disease can spread Y. pestis through respiratory droplets.) The Animal Reservoirs The plague bacillus occurs in 200 different species of mammals. The primary long-term endemic reservoirs are various rodents, such as mice and voles, that harbour the organism but do not develop the disease.

These hosts spread the disease to other mammals called amplifying hosts that become infected with the bacterium and experience massive die-offs during epidemics. These hosts, including rats, ground squirrels, chipmunks, and rabbits, are the usual sources of human plague. The particular mammal that is most important in this process depends on the area of the world. Other mammals (camels, sheep, coyotes, deer, dogs, and cats) can also be involved in the transmission cycle.

Because death can occur as quickly as 2 to 4 days after the appearance of symptoms, prompt diagnosis and treatment of plague are imperative. The patient’s history, including recent travel to endemic regions, can help establish a diagnosis. Culture of the organism is the definitive method of diagnosis, although a Gram stain of aspirate from buboes often reveals the presence of the safety-pin shaped bacteria.

Plague is one of a handful of internationally quarantinable diseases (others are cholera and yellow fever). In addition to quarantine during epidemics, the plague is controlled by trapping rodents and by poisoning their burrows with insecticide to kill fleas. These methods, however, cannot begin to control the reservoir hosts, so the potential for plague will always be present in endemic areas, especially as humans encroach into rodent habitats. A vaccine for plague is no longer available in the United States. Streptomycin or gentamicin are drugs of choice. 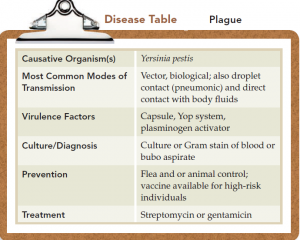