The early studies on infectious diseases in the late 19th century quickly demonstrated that microscopic organisms were the cause of many illnesses, and a number of bacteria were isolated by filtering the lysate of diseased cells and examining them by cultivation and microscopy. However, several diseases failed to reveal an agent that could be grown or seen with the microscopes of the day, and yet diseased cell lysates could faithfully transmit the symptoms to new hosts. Many of these first steps into the discovery of viruses (the word ‘virus’ comes from the Latin for ‘poison’) were done using plant viruses and our modern understanding of virus structure, replication, assembly, and even the nature of virus genetics was derived from studies of the tobacco mosaic virus (TMV). The virus, which causes mosaic patterning of the leaves of the tobacco plant, was first described in 1892.

TMV was the first virus to be observed under the electron microscope, the first to demonstrate the intrinsic infectivity of a naked viral genome, and the first virus to be assembled in vitro from purified preparations of viral RNA and coat protein molecules. Studies with turnip yellow mosaic virus and tomato bushy stunt virus revealed the morphological details of icosahedral viruses. Ironically, in more recent times the molecular study of plant viruses has trailed behind that of animal viruses, as plant cells are more difficult to culture than animal cells.

Plant viruses have traditionally been named with a combination of the host plant and the type of disease produced (e.g. tobacco mosaic, turnip yellow mosaic, tomato bushy stunt, cauliflower mosaic, tomato spotted wilt). Plant viruses are diverse in their morphology, nucleic acid composition, and replication. It is beyond the scope of this book to detail all viruses but highlights the various morphologies and groupings of plant viruses.

They may be dsDNA (Badnaviridae, e.g. rice tungrobacilliform virus), ssDNA (Geminiviridae, e.g. maize streak virus), dsRNA (Reoviridae, e.g. clover wound tumor virus) or ssRNA viruses of positive (Comoviridae, e.g. tobacco ringspot virus) or negative (Rhabdoviridae, e.g. potato yellow dwarf virus) sense. Like animal viruses, plant virus genomes can be segmented or nonsegmented, and enclosed in helical or icosahedral capsids, although several have amorphous capsids with no defined shape. Envelopes are found only within the Bunyaviridae and Rhabdoviridae families and there are no Class VI plant viruses.

Plant virus infections can affect photosynthesis, respiration, nutrient availability, and hormonal regulation of growth, with morphological outcomes that include mosaic formation, yellowing, molting or other color disfiguration, stunting, wilting, and necrosis. These conditions, resulting from cell and tissue damage, can significantly reduce the yield and commercial value of crops and the impact of plant viruses globally is estimated to cost $70 billion annually. Plants and crops of all types can be affected; for example, swollen shoot disease devastates cocoa trees and is a serious and ongoing threat to the cocoa bean industry across large parts of western Africa. Rice tungro disease is the most important rice crop disease in Southeast Asia and is caused by a co-infection of two viruses.

Disease symptoms are due to infection by rice tungro bacilliform virus (Family Caulomoviridae), while transmission between host plants relies on rice tungro spherical virus (Family Sequaviridae) and an insect vector, the leafhopper. Despite such obvious signs of infection, the way in which plant viruses cause cell damage has been difficult to understand. Plant viruses code for very few proteins, but as is the case with many viral proteins, they are usually multifunctional. Many of the nonessential (and as yet unknown) functions of plant virus proteins may interact detrimentally with host proteins, resulting in the observed pathologies.

The stem and leaf surfaces of plants can in many ways be compared to the human skin; they do not have receptors for virus attachment and have a protective function. For plant viruses to be infectious they must penetrate this barrier and gain access to the metabolic machinery of the plant cell; hence it is often through wounds that viruses enter plant tissues.

Many plant viruses depend on a vector for their transmission, commonly Some viruses are passed vertically to progeny plants through infected pollen or seeds and others are present in tubers, bulbs, and cuttings. In the laboratory, infection is achieved by rubbing the leaf with a cloth soaked in a virus suspension, using a fine abrasive to create the necessary wounds. In effect this procedure mimics the plaque assay described for animal viruses, but is not as accurate. On entry the virus particle is uncoated and goes through a replication cycle similar to that of animal viruses.

Plant viruses rarely cause significant damage and disease unless they become systemically distributed throughout the plant. Failure for this to happen explains why some plants are resistant to particular virus infections. Movement is facilitated by virus movement proteins, which are involved in the transport of virus or virus nucleic acid through the fine pores (plasmodesmata) in the cell walls that interconnect plant cells. Movement also occurs through the companion and sieve cells of the phloem, facilitated by viral capsid proteins. 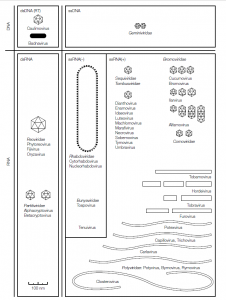 Once infected, it is almost impossible to eliminate a virus infection from a plant by use of antiviral agents. Until recently a reliance on horticultural practice (the use of virus-free seeds, eradication of vectors, choice of planting time, etc.) helped to reduce the extent of virus infection but more recently genetic engineering has allowed the construction of plants that show natural resistance to virus infections. Plants do not mount immune responses but there is evidence that prior infection with a non pathogenic virus can protect plants from infection by a more pathogenic strain. This phenomenon, referred to as pathogen-derived resistance, has been induced deliberately by engineering the tobacco plant genome to contain the coat protein gene of TMV. The resulting transgenic plant was protected from challenge by the wild type but as yet the mechanism of this resistance is not clearly understood.

Viroids are small, naked circular infectious ssRNA molecules of just a few hundred nucleotides that form the smallest known pathogens of plants. Unlike viruses, viroids have no capsid and appear to encode no mRNA or proteins. Viroids are spread by plant propagation (e.g. cuttings and tubers), through seeds, and by manual mishandling with contaminated implements. Approximately 25 viroids have been identified to date and they can cause serious plant diseases. The first to be examined in detail was potato spindle tuber viroid (PSTVd), which is responsible for significant annual loss to the potato industry. The RNA is a covalently closed circle and ranges in size from 246 to 357 nucleotides in length. 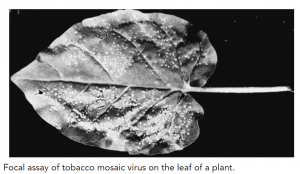 The RNA has a complex secondary and tertiary structure, which gives it a rod-like shape and resistance to nucleases. The RNA does not have a characteristic open reading frame and so does not act as mRNA. How this piece of RNA causes disease is largely unknown, but it is thought that it may interfere with either the action or selectivity of the host cell RNA polymerase II enzyme, or with RNA splicing. Satellites are dependent pathogens that require host cell or helper virus proteins for full replication. They are of two types: satellite viruses encode their own capsid protein while satellite nucleic acids are enclosed in the capsid of a helper virus infecting the same host cell. The hepatitis D virus (HDV) is a satellite nucleic acid comprising a circular RNA molecule of 1700 nucleotides, and is the smallest known pathogen of humans. HDV only replicates in cells infected with HBV and as a result its transmission and treatment are linked to that of its helper virus, HBV. The HDV genome encodes two proteins, known as delta antigens, and their presence appears to contribute to the replication of both satellite and helper, often leading to severe clinical outcome. 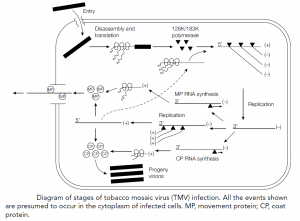