J. Morris and R. Chanock isolated the primary representative of pneumoviruses – respiratory syncytial (or RS) virus in the USA in 1956.

First human metapneumovirus was isolated by A. Osterhaus and colleagues in 2001 after the infection outbreak in the Netherlands.

For the longest time, pneumoviruses were regarded as the members of the Paramyxoviridae family. Only the latest ICTV release of virus taxonomy and nomenclature published in 2015 ultimately demarcated them and placed pneumoviruses into the separate family. 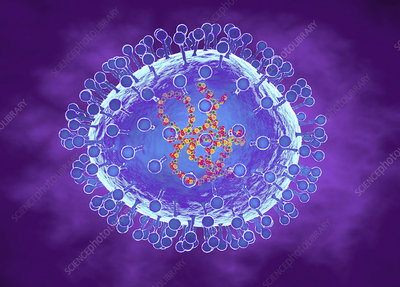 Structure and Reproduction of Pneumoviruses

The structure of pneumoviruses resembles a certain extent the composition of paramyxoviruses but with the number of distinct traits.

All pneumoviruses contain linear single-stranded negative-sense non-segmented RNA. They are also covered with the external lipid envelope of spherical shape.

The large glycoprotein receptor of pneumoviruses is devoid of hemagglutinin and neuraminidase activity, and it is called G protein. The fusion F protein of respiratory syncytial virus lacks hemolysin activity.