Poliomyelitis  (polio) is an acute enteroviral infection of the spinal cord that can cause neuromuscular paralysis. Because it often affects small children, in the past it was called infantile paralysis. No civilization or culture has escaped the devastation of polio. The efforts of a WHO campaign have significantly reduced the global incidence of polio. It was the campaign’s goal to eradicate all of the remaining wild polioviruses by 2000, and then by 2005. It didn’t happen. Eventually, billionaire Bill Gates got involved and contributed $700 million to help eradicate the disease. During the course of 2009, it rippled through many countries that had previously been declared polio-free.

Most infections are contained as short-term, mild viremia. Some persons develop mild nonspecific symptoms of fever, headache, nausea, sore throat, and myalgia. If the viremia persists, viruses can be carried to the central nervous system through its blood supply. The virus then spreads along specific pathways in the spinal cord and brain. Being neurotropic, the virus infiltrates the motor neurons of the anterior horn of the spinal cord, although it can also attack spinal ganglia, cranial nerves, and motor nuclei. The nonparalytic disease involves the invasion but not the destruction of nervous tissue. It gives rise to muscle pain and spasm, meningeal inflammation, and vague hypersensitivity.

In paralytic disease, invasion of motor neurons causes various degrees of flaccid paralysis over a period of a few hours to several days. Depending on the level of damage to motor neurons, paralysis of the muscles of the legs, abdomen, back, intercostals, diaphragm, pectoral girdle, and bladder can result. In rare cases of bulbar poliomyelitis, the brain stem, medulla, or even cranial nerves are affected. This situation leads to loss of control of cardiorespiratory regulatory centres, requiring mechanical respirators. In time, the unused muscles begin to atrophy, growth is slowed, and severe deformities of the trunk and limbs develop.

Common sites of deformities are the spine, shoulder, hips, knees, and feet. Because motor function but not sensation is compromised, the crippled limbs are often very painful. In recent times, a condition called post-polio syndrome (PPS) has been diagnosed in long-term survivors of childhood infection. PPS manifests as a progressive muscle deterioration that develops in about 25% to 50% of patients several decades after their original polio attack.

The poliovirus is in the family Picornaviridae, genus Enterovirus—named for its small (pico) size and its RNA core. It is nonenveloped and nonsegmented. The naked capsid of the virus confers chemical stability and resistance to acid, bile, and detergents. By this means, the virus survives the gastric environment and other harsh conditions, which contributes to its ease of transmission. 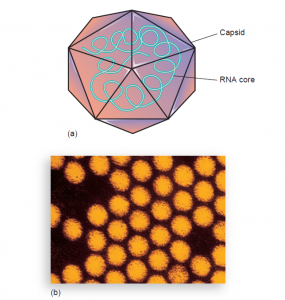 After being ingested, polioviruses adsorb to receptors of mucosal cells in the oropharynx and intestine. Here, they multiply in the mucosal epithelia and lymphoid tissue. Multiplication results in large numbers of viruses being shed into the throat and faeces and some of them leak into the blood. The sequence of events just described then ensues. Depending on the number of viruses in the blood and their duration of stay there, an individual may exhibit no symptoms, mild nonspecific symptoms such as fever or short-term muscle pain, or devastating paralysis. Scientists studying poliovirus virulence focus on components of the virus that allow attachment and penetration of host cells.

Sporadic cases of polio can break out at any time of the year, but its incidence is more pronounced during the summer and fall. The virus is passed within the population through food, water, hands, objects contaminated with faeces, and mechanical vectors. Although the 20th century saw a very large rise in paralytic polio cases, it was also the century during which effective vaccines were developed. The infection was eliminated from the Western Hemisphere in the late 20th century. Sadly, it is proving extremely difficult to eradicate it from the developing world. 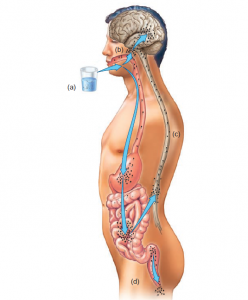 Poliovirus can usually be isolated by inoculating cell cultures with stool or throat washings in the early part of the disease. Viruses are sometimes then subjected to RNA fingerprinting to determine if they are wild strains or vaccine strains. The stage of the patient’s infection can also be demonstrated by testing serum samples for the type and amount of antibody.

deformities and to retrain muscles is recommended after the acute febrile phase subsides. The mainstay of polio prevention is vaccination as early in life as possible, usually in four doses starting at about 2 months of age. Adult candidates for immunization are travellers and members of the armed forces. The two forms of vaccine currently in use are inactivated poliovirus vaccine (IPV), developed by Jonas Salk in 1954, and oral poliovirus vaccine (OPV), developed by Albert Sabin in the 1960s. Both are prepared from animal cell cultures and are trivalent (combinations of the three serotypes of the poliovirus).

Both vaccines are effective, but one may be favoured over the other under certain circumstances. For many years, the oral vaccine was used in the United States because it is easily administered by mouth, but it is not free of medical complications. It contains an attenuated virus that can multiply in vaccinated people and be spread to others. In very rare instances, the attenuated virus reverts to a neurovirulent strain that causes disease rather than protects against it. For this reason, IPV is the only vaccine used in the United States.