This method combines Polymerase Chain Reaction with the Ligation Assay. PCR-OLA distinguishes between the ligation and the absence of ligation of two oligonucleotides. A single nucleotide mismatch (at the site of hybridized oligonucleotides) prevents ligation and hence we can distinguish between the wild and mutant genotype. PCR-OLA can be understood with the help of an example. PCR-OLA is a sensitive, rapid and highly specific method. Assume that in

Another oligonucleotide, say probe 2, is labeled at its 3’end with digoxigenin (D, an antibody binding indicator) and its 5’end has nucleotide complementary to position 51 (adjacent to mutated nucleotide) in the mutant gene sequence, say cytosine (C).

Probe 1 and probe 2 are joined covalently 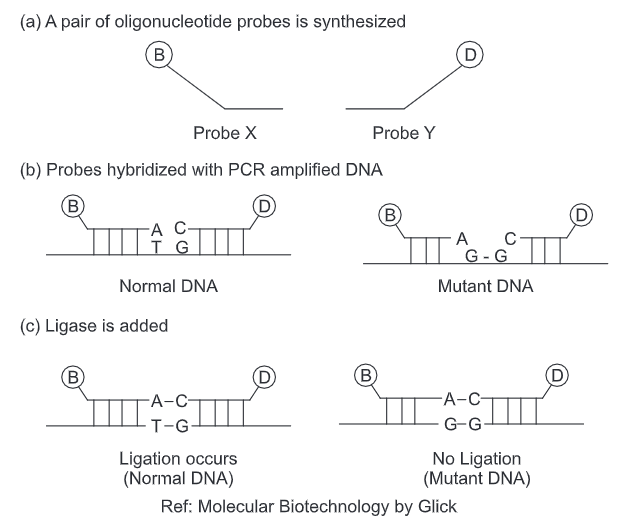 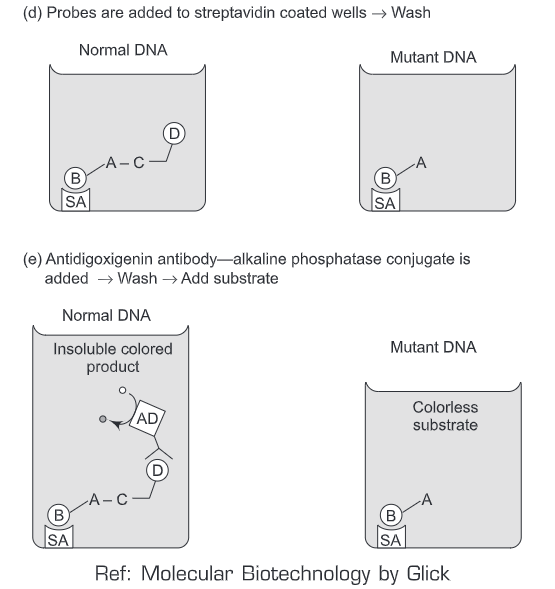 No ligation of Probe 1 and probe 2

(Because of single nucleotide misalignment)

Now, we have to determine whether ligation has taken place between the two probes in both cases (normal and mutant gene sequence) or not. After hybridization and ligation,

Reaction mixture is transferred to wells coated with streptavidin

Unbound material is washed away

Biotin-labeled probe DNA is present only in the wells

Then, unbound Antidigoxigenin antibodies – AP are washed away

If no colored product – No ligation – Mutant genotype