Prokaryotes and their environment

Bacteria and Archaea can grow in low temperature environments (for example, the Antarctic bacterium Flavobacterium frigidarium isolated from marine sediments can grow at 40°C, as can an archaeon isolated nearby, Methanococcoides burtonii) as well as high temperature ones. The highest known temperature allowing growth of a Bacterium is 95°C (Aquifex pyrophilus, isolated from an Icelandic marine thermal vent), while the archaeon Pyrolobus fumarii will grow at 113∞C. Bacteria and Archaea are found in most places in the biosphere.

They have become adapted to use a wide variety of compounds as sources of energy and carbon, and may be adapted to use those anthropogenically produced chemical compounds as well. The range of metabolic diversity means that microorganisms dominate nutrient cycling processes in almost every ecosystem. This role in the cycling of elements has led Bacteria and Archaea to form very close associations with their peers as well as with plants and animals. The close nature of their commensalism, parasitism, and symbiosis mean that pure cultures of many Bacteria and Archaea are extremely difficult to grow in the laboratory. These viable but nonculturable (VBNC) microorganisms can only be detected in biotopes using visualization techniques such as fluorescence in situ hybridization (FISH) or indirect PCR-based methods now known as environmental genomics.

▶Cycling of elements through the biosphere

James Lovelock’s Gaia hypothesis portrays the earth as a self-regulating entity. The basis of this regulation is the involvement in the movement of millions of tons of chemical elements such as carbon, nitrogen, and sulfur through the atmosphere, marine, and terrestrial environments. The inter-conversion between solid and gaseous compounds of the elements is mostly accomplished by microorganisms, particularly the Archaea and Bacteria. The coupling of spontaneous chemical reactions with those catalyzed by microorganisms has given the study of these earth-scale transformations the name of biogeochemistry. An overall scheme showing the involvement of organisms in biogeochemical cycling is shown in Figure below. 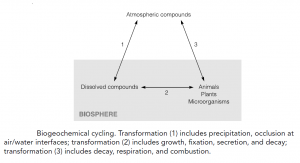 The biogeochemical cycling of sulfur is extremely complex, and cannot be easily described diagrammatically. The complexity of the cycle is dictated by the relatively high number of oxidation states that sulfur can have in solution and in the presence of oxygen. The most significant carbon compound in the atmosphere is probably carbon dioxide, serving as a link between terrestrial and marine environments, but there is no direct sulfur equivalent. In prioritizing volatile atmospheric sulfur compounds, sulfur dioxide (SO2), hydrogen sulfide (H2S), carbonyl sulfide (COS), carbon disulfide (CS2), dimethyl sulfide (CH3SCH3), dimethyl disulfide (CH3SSCH3), and methane thiol (CH3SH) may be significant, depending on the geographical location examined. The nature of sulfur’s chemistry may mean that nonvolatile molecules, such as methane sulfonate (CH3SO3–) and sulfate (SO4–) may also be present in quantity in the atmosphere as dissolved aqueous ions.

The biogeochemical cycling of sulfur serves to illustrate regulation on a global scale. The sulfur compound dimethylsulfonium propionate (DMSP) is produced intracellularly by marine photosynthetic algae. During and after algal blooms in the open oceans, this DMSP is released into solution on cell death, where it is metabolized by marine microorganisms to produce dimethyl sulfide (DMS). The generation of DMS is sufficiently high for some of the compound to enter the atmosphere as a gas above the ocean, where photooxidation by the sun’s rays lead to the breakdown of DMS into two solid forms of sulfur: sulfate and methane sulfonate. These solids act as nuclei for the condensation of water, and clouds are formed. The clouds reduce the sunlight reaching the ocean surface, and the growth of the photosynthetic algae that produced the DMSP in the first place is reduced. This regulatory cycle stops algae covering the entire open ocean, although only in regions where man has not upset this cycle by the dumping of sewerage or other compounds that the algae might feed on.

Sulfur cycling also occurs through terrestrial ecosystems, where a combination of sulfate-reducing Bacteria (such as Desulfobacter and Desulfovibrio species), and sulfate-oxidizing Bacteria (such as Thiobacillus species) interconvert elemental sulfur, hydrogen sulfide, sulfate, thiosulfate, and polythionates. Sulfur is also assimilated by all organisms into the amino acids cysteine and methionine and so ultimately into proteins. Sulfur is also assimilated for the prosthetic protein groups known as iron-sulfur clusters.

Man’s recent release of greenhouse gases such as carbon dioxide (CO2) into the atmosphere is generally held to be responsible for global warming. In the absence of man, carbon dioxide serves as an atmospheric link between carbon released in the marine and terrestrial environments, with methane playing a secondary role. Outside the atmosphere, carbon forms a wide range of compounds, from simple metal cyanides to complex macromolecules such as starch, lignin, cellulose, and nucleic acids. Microorganisms take part in the ultimate conversion of all of these into carbon dioxide or methane, and these processes may be broadly divided into the aerobic and anaerobic. Carbon compounds are broken down either aerobically by respiration or anaerobically by fermentation. The release of carbon dioxide is balanced by the fixation of CO2 during photosynthesis by plants and microorganisms.

The nitrogen cycle is the easiest to define in terms of the number of participating major nitrogenous compounds. Proteins, prosthetic groups such as chlorophyll, nucleic acids, and other macromolecules can be regarded as fixed nitrogen, present in the marine or terrestrial environments. Ammonia, nitrate, and nitrite ions may participate either in the recycling of fixed nitrogen or in the generation of atmospheric molecular nitrogen. The bulk of molecular nitrogen is reduced by Bacterial nitrogen fixation, while very small amounts are reduced by lightning strikes. The biologically mediated processes have been called mineralization, nitrification, denitrification, nitrogen fixation, and nitrate reduction.

Mineralization of fixed nitrogen is performed by many microorganisms during the degradation of organic matter and results in the generation of free ammonia. This ammonia may be re-assimilated or converted into nitrate by the process known as nitrification. Well-characterized nitrifiers include Nitrosomonas europaea. Nitrification is a two-step process via nitrite.

The conversion of nitrate to molecular nitrogen (denitrification) is performed by a taxonomically undefined group of organisms including the Bacteria Paracoccus denitrificans and Pseudomonas aeruginosa, as well as the Archaea Haloarcula marismortui and Pyrobaculum aerophilum. Recent evidence suggests that some fungi can also denitrify.

Nitrate is converted sequentially into nitrite, nitric oxide, and nitrous oxide before nitrogen is released from the organism. Each stage of this process is energetically beneficial to the organism and is generally coupled to the electron transport chain. For this reason it is also called nitrate respiration.

Both Archaea such as Methanosarcina barkeri and Bacteria such as Rhizobium species are also capable of nitrogen fixation or diazotrophy. However, the rhizobia (bacteria classified as Rhizobium and Bradyrhizobium) have the unique ability to form nodules on the roots of certain plants, allowing nitrogen to be fixed almost directly from atmosphere to plant. The majority of diazotrophs are free living and employ various methods to protect the obligately anaerobic enzyme nitrogenase from the effects of molecular oxygen.

▶Detection of Bacteria in their natural habitats

The isolation and laboratory cultivation of a particular Bacterium from a biotope was at one time the sole evidence that that species was present. However, many studies have shown that there are many more prokaryotes in the environment than can be cultured using laboratory media, and nucleic acid analysis has complemented classical microbial ecology. Individual cells can be labeled with a dye attached to an oligonucleotide that hybridizes to ribosomal RNA. The organisms that bind the oligonucleotide will then show up under a fluorescence microscope. Careful choice of oligonucleotide can mean that these fluorescent probes can be species- or even strain-specific, allowing the microbial ecologist to examine and even count various sorts of microorganism in a particular niche.

Various developments of this FISH technique have allowed the differentiation between metabolically active and inactive microorganisms. The development of PCR means that the total ribosomal RNA (mRNA should only be produced by active cells) in a microbial community can be examined. By sequencing a library of ribosomal cDNA (complementary DNA produced from the action of reverse transcriptase on mRNA) from a particular biotope, the ecologist has some idea of the diversity of active microorganisms. Extending this idea of amplification of DNA to other genes has developed into the field of environmental genomics. Both FISH and PCR of total genomic DNA suggest that there is a far greater diversity of Bacteria and Archaea than first thought, to the extent that the idea of discrete species barriers is beginning to break down. Although these new organisms are often held to be VBNC, new techniques and laboratory practices are finally yielding pure and mixed cultures suitable for physiological and biochemical studies. Bacterial commensalism and microbial communities

Bacteria are classically studied as pure cultures in the laboratory. These cultures are regarded as clonal and genetically stable. However, the situation in the environment is somewhat different: Bacteria and Archaea rarely grow as pure cultures, more often forming associations with organisms around them. These associations can range from the symbiotic to the pathogenic. The diversity of life in a particular niche often makes functional ecology (the study of which organisms are responsible for which activities) challenging. Many ecosystems have evolved to include many Bacteria and Archaea exchanging and competing for metabolic intermediates to a state where no single chemical compound is completely metabolized by a single organism.