Methane-producing prokaryotes are a group of archaea which are capable of reducing carbon dioxide or low molecular weight fatty acids to produce methane. The methanogens are strictly anaerobic active at redox potential between — 350 and — 450 mv. They can use CO2 as an electron acceptor. They reduce CO2 using H2 produced in the fermentation process. They use carbon dioxide as the only carbon source and are considered as chemolithotrophic. If carbon dioxide is considered available in carbonate form the reaction comes to be:

In, the above equation numbered (i) ΔGo’ (Called Gibbs free energy) gives the indication of the energy yield of the reaction is kilocalories per mole. ΔGo’ in exothermic (energy-yielding) reactions is negative.

The carbon dioxide is converted to methane via a pathway involving unusual coenzymes. To begin with, initially, CO2 is bound to methanofuran at the formyl reduction level and it is followed by reduction to methenyl, methylene, methyl, and finally methane level, involving a number of enzymes. Transformation of CO2 to cell material is not according to ribulose diphosphate pathway commonly found in other chemolithotrophs rather by acetyl- CoA synthase pathway.

It is significant to note that methyl group of acetate is formed by stepwise reduction of CO2 to methyl via tetrahydro methanopterin pathway which otherwise leads to methane evolution. The methyl group gets joined to carbonyl group of acetate which is derived by the reduction of another CO2 to CO by carbon monoxide dehydrogenase, causing catalysis of synthesis of methyl group, CO and HS — CoA to acetyl CoA that is why it has been named as acetyl CoA synthase.

The acetate in turn is processed through a reverse tricarboxylic acid cycle to give pyruvate and trioses. There are the methanogens like Methanosarcina barkeri that can metabolise methanol, acetate and methylamines to methane and carbon dioxide.

The syntrophism also known as cross-feeding between methanogens and other anaerobes like Syntrophobacter associated with methanogens broaden the range of substrates suitable for methanogenesis.

It is a matter of deep concern that part of methane escapes to the atmosphere and takes part in photochemical processes. Currently, methane concentration of the atmosphere is estimated to be 1.7 ppm and it is increasing every year by one percent.

(ii) methylotrophic pathway and aceticlastic pathways. All the three pathways are represented in Fig. below.

A limited number of methanogens are capable to oxidise secondary alcohols for CO2 reduction to methane. The methanogens which carry out CO2 reducing methanogenesis use a specialized anaerobic respiration pathway. The reduction of carbon dioxide to methane (CH2 ) takes place through a series of reductive steps which generate a methyl group. This pathway employs several reducing enzymes and coenzymes F420 and nickel containing coenzyme F430 methanofuran, mathanoprotein and coenzyme M. 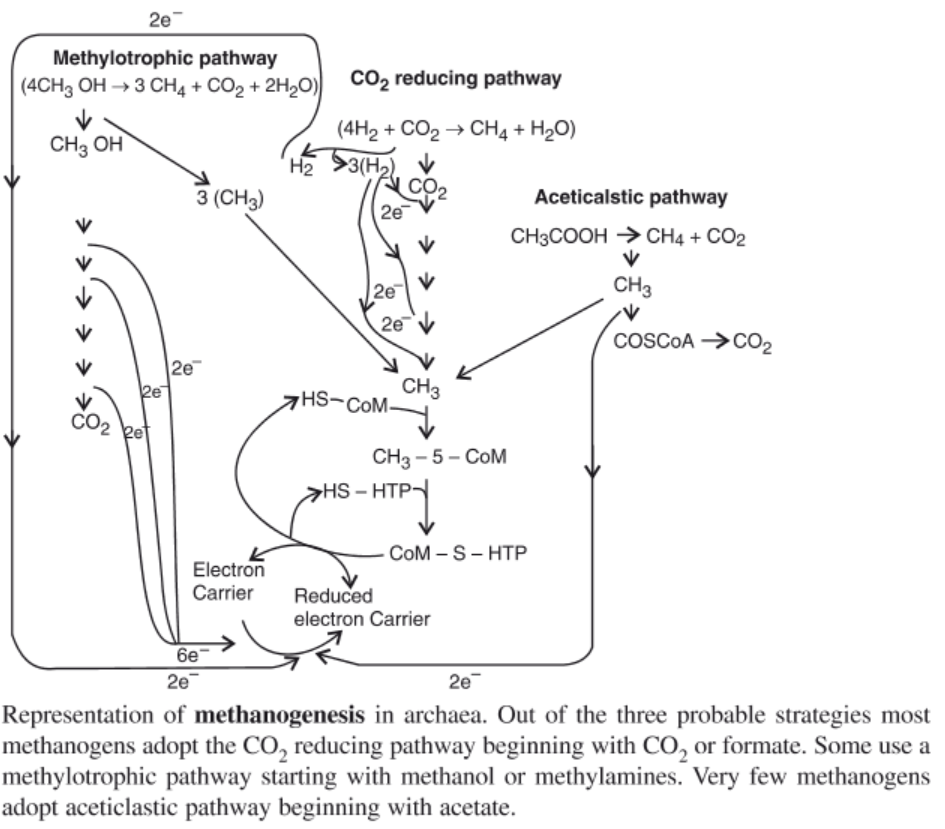 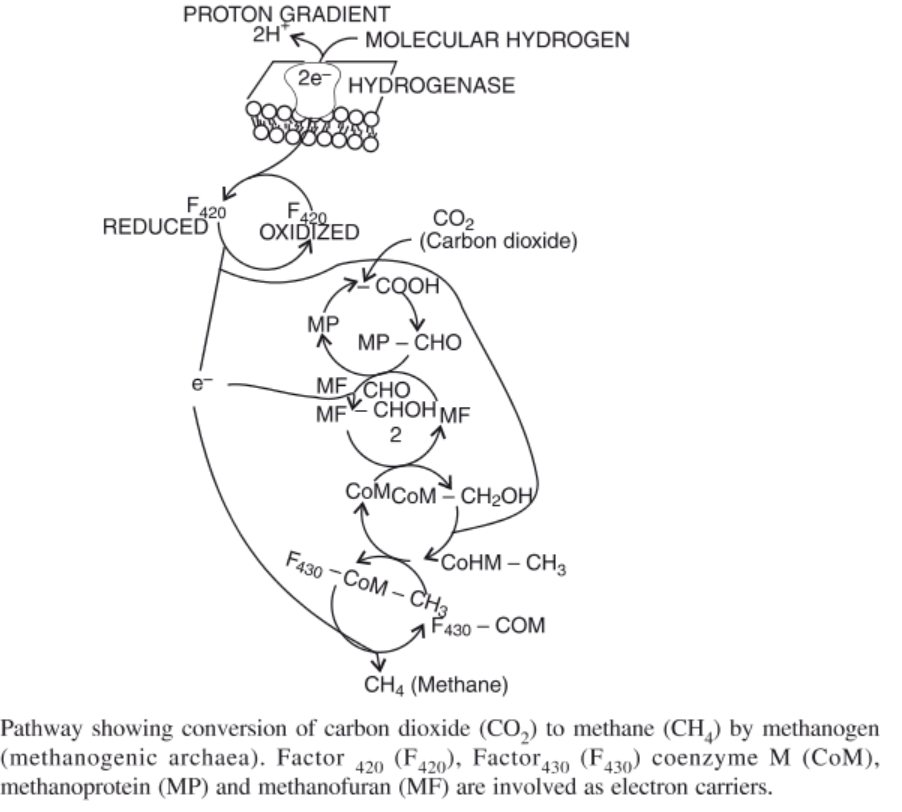