How does atomic force microscope probes the surface of a specimen?

An atomic force microscope instead of using a lens is provided with a probe to examine the surface of a specimen with a sharp tip which may be several micrometres in and less than 10 nm in diameter at the point near field to be examined. The tip lies at the end of the lever which may be 100 — 200 µm in length. When the tip moves across the specimen, the forces between the two cause the lever to bend. The movement of the lever is detected using a computer and an image of the surface of the specimen is built from the minute deflections of the tip. Atomic force microscopy is a very high resolution type of scanning probe microscopy. AFM is one of the foremost tool for imaging, measuring and manipulating matter at the nanoscale. The information is gathered by “feeling” the surface with a mechanical probe.

The AFM consists of a cantilever with a sharp tip or probe at the its end which is used to scan the surface of specimen. The cantilever is typically silicon or silicon nitride with a tip radius of curvature of the order of nanometres. 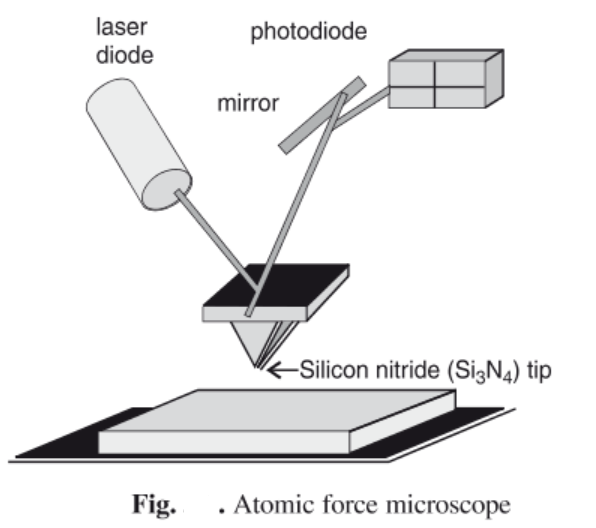