Radioimmunoassay (RIA) was introduced into medical practice still before the enzyme immunoassay. At first, it had many practical applications. By means of RIA, it became possible to test a large number of samples in a very short period of time using very small amounts of reagents. 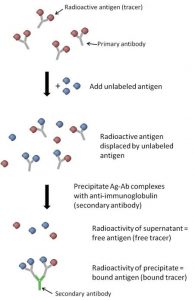