This process is sometimes called generalized recombination and involves the exchange of DNA between two regions of homology (i.e. similar but not necessarily identical DNA sequence) on two different DNA molecules. One of these regions might be on a plasmid, the other on the chromosome. In rarer instances these two regions could be on the same chromosome but many hundreds of base pairs apart or more. After recognition and alignment of the regions of homology by the enzyme RecA, a protein complex, RecBCD, digests dsDNA until it reaches a chi sequence (crossover hot instigator, sequence GCTGGTGG). The activity of RecBCD then changes to a single strand specific 5’–>3′ exonuclease, so that a single DNA strand remains as a long 3’ overhang. The free single-stranded DNA becomes coated with RecA protein, and can migrate into the other DNA molecule in a process of strand invasion .

Once the nicks in the DNA strands have been joined, the two DNA molecules adopt a cross-shaped formation known as the Holliday junction.The binding of RuvA to the Holliday junction leads to the binding of RuvB to adjacent double-stranded DNA. RuvB is a translocase, and promotes the movement of the Holliday junction along the DNA molecules.This is known as branch migration. The single-stranded parts of the junction are cleaved (strand exchange) and the two molecules become separate molecules again (resolve) when RuvC binds to the RuvAB–DNA complex. How the resolution proceeds is still the subject of some debate, but it has been postulated that equilibrium is established between a RuvA planar Holliday junction and tetrahedral junctions stabilized by another protein, RusA. Depending on the direction of a final cleavage, there are two possible outcomes. 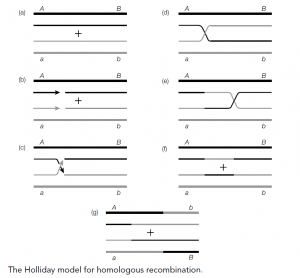 Recombination can occur between regions of DNA with apparently no homology, where only a few base pairs are the same. This is an important mechanism in the XerC/XerDmediated resolution of the two circular molecules of DNA in E. coli chromosomal replication, and does not require RecA. A similar method is used to integrate bacteriophage l DNA into its host’s genome. The integration site is a 15 bp sequence present in both the host and l DNA. The l integrase makes cuts on both strands about 15 bp apart. Integration host factor (IHF) catalyzes recombination between the homologous sites and the l genome is inserted into that of E. coli. The reverse of the process is catalyzed by the phage-encoded excisionase, stimulated by host IHF and Xis.

Transposition is the insertion of short DNA fragments into any position in the genome, a process carried out by transposons, insertion sequences (IS), and some specialized phages. This is sometimes called illegitimate recombination as it appears to require no homology between sequences. However, analysis of transposon positions after transposition suggests that it is a pseudo-random event, and that the recombination is site-specific. However, the recognition sites are extremely degenerate and occur so frequently in most genomes that almost all genes can be interrupted by the entry of a transposon.

The presence of insertion sequences can be detected throughout the genomes of many Bacteria and Archaea as well as in their plasmids, and they are essential to some functions. The integration of the F’ plasmid into the E. coli chromosome is mediated by homologous recombination between identical insertion sequences. The ecology and microbiology of transposons is extremely complex, given that some of these elements can move around the genome in the absence of chromosomal replication and initiate a form of conjugation to transfer themselves from one cell to another. In some senses, transposable elements could be looked on as very basic viruses especially given that transposition is the method of replication for bacteriophage such as Mu. A simple transposition event is illustrated by the conservative transposition of an IS element. The IS encoded transposase makes cuts at another site in the host chromosome (in a pseudo-random manner) and is excised and integrated into the new site in much the same way as l achieves lysogeny. The IS is flanked by inverted terminal repeats, which aid in the transposition process. As the transposase cuts are staggered, the bases either side of the repeats are duplicated after integration. The transposable viruses do not excise themselves during transposition, but place a copy elsewhere on the genome instead. This process of replicative transposition allows Mu to replicate its genome in the host in terms of copy number per chromosome as well as during cell division.

Transposons offer a convenient method of generating mutants, particularly when gene interruption is required. Transposon mutagenesis is most developed for Tn5 derivatives, in which additional genes such as those for kanamycin resistance or b-galactosidase activity have been added. A bacterial strain can be transformed with a plasmid bearing the modified transposons. The transposons can then jump from the plasmid to the chromosome and cause random interruption of genes. Auxotrophs or other mutants can then be identified as normal. 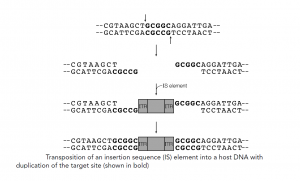 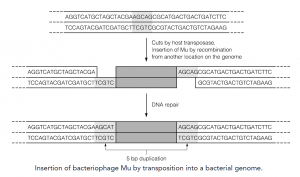