Each of the fungal groups is characterized by differences in their life cycles. All fungi are characterized by having a period of vegetative growth where their biomass increases. The length of time and the amount of biomass needed before sporulation can occur vary. Almost all fungi reproduce by the production of spores, but a few have lost all sporing structures and are referred to as mycelia sterilia. Different types of spore are produced in different parts of the life cycle.

▶Reproduction in the Chytridiomycota and related taxa

Fungi in the Chytridiomycota and related groups are quite distinct from other fungi as they have extremely simple thalli and motile zoospores. Some species within this group can be so simple that they consist of a single vegetative cell within (endobiotic) or upon (epibiotic) a host cell, the whole of which is converted into a sporangium, a structure containing spores. These types are termed holocarpic forms.

Other members of this group have a more complex morphology, and have rhizoids and a simple mycelium. Asexual reproduction in the Chytridiomycota is by the production of motile zoospores in sporangia that are delimited from the vegetative mycelium by complete septae. The zoospores have a single, posterior flagellum. Sexual reproduction occurs in some members of the Chytridiomycota by the production of diploid spores after either somatic fusion of haploid cells, or fusion of two different mating-type mycelia, or fusion of two motile gametes, or fusion of one motile gamete with a nonmotile. The resulting spore may undergo meiosis to produce a haploid mycelium or it may germinate to produce a diploid vegetative mycelium, which can undergo asexual reproduction by the production of diploid zoospores. The diploid mycelium can also produce resting sporangia in which meiosis occurs, generating haploid zoospores that germinate to produce haploid vegetative mycelium.

In the Zygomycota, asexual reproduction begins with the production of aerial hyphae. The tip of an aerial hypha, now called a sporangiophore, is separated from the vegetative hyphae by a complete septum called a columella. The cytoplasmic contents of the tip differentiate into a sporangium containing many asexual spores. The spores contain haploid nuclei derived from repeated mitotic divisions of a nucleus from the vegetative mycelium. Dispersal of the spores is by wind or water. In sexual reproduction, two nuclei of different mating types fuse together within a specialized cell called a zygospore. In some species the different mating-type nuclei may be within one mycelium (homothallism). In other species, two mycelia with different mating-type nuclei must fuse (heterothallism). In both cases, fusion occurs between modified hyphal tips called progametangia, which once fused are termed the zygospore. Within the developing zygospore meiosis occurs; usually three of the nuclear products degenerate, leaving only one nuclear type present in the germinating mycelium. 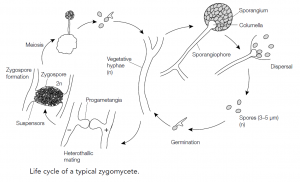 ▶Reproduction in the Glomeromycota

The Glomeromycota are a monophyletic group, distinct from the Zygomycota on the basis of their symbiotic habit, lack of zygospores, and their rDNA phylogeny. No sexual reproduction has been detected in this group and their life cycle is characterized by germination of large mitospores in soil followed by growth of the germ tube towards a compatible plant root. Once in contact, the germ tube forms an appressorium, a cushion-like structure that aids penetration of the fungus into the root cells, and from the penetration site a number of parasitic structures develop within the root. New spores are formed inside the root and/or in the soil.

▶Reproduction in the Dikarya: Ascomycota

The vegetative stage of the Ascomycota life cycle is accompanied or followed by asexual sporulation by the production of single spores called conidia from the tips of aerial hyphae called conidiophores. The spores can be delimited by a complete transverse wall formation followed by spore differentiation termed thallic spore formation, or more usually by the extrusion of the wall from the hyphal tip, termed blastic spore formation. These spores can be single-celled and contain one haploid nucleus, or they can be multicellular and contain several haploid nuclei produced by mitosis.

Spores can be produced from single, unprotected conidiophores or they can be produced from aggregations that are large enough to be seen with the naked eye. The conidiophores can aggregate into stalked structures where the spores produced are exposed at the top (synnema or coremia). Alternatively, varying amounts of sterile fungal tissue can protect the conidia, as in the flask-shaped pycnidia. Some species produce conidia in plant tissue, and the conidial aggregations erupt through the plant epidermis as a cup-shaped acervulus or a cushion-shaped sporodochium.

Sexual reproduction in this group occurs after somatic fusion of different mating-type mycelia. A transient diploid phase is rapidly followed by the formation of ascospores within sac-shaped asci differentiated from modified hyphal tips. In the initial stages of ascal development hooked hyphal tips form, called croziers or shepherds’ crooks because of their shape. They have distinctive septae at their base, which insure that two different mating-type nuclei are maintained in the terminal cell. Formation of the septae is co-ordinated with nuclear division. In yeasts all these events occur within one cell, after fusion of two mating-type cells, the whole cell being converted into an ascus.

In more complex Ascomycota many asci form together, creating a fertile tissue called a hymenium. In some groups the hymenium can be supported or even enclosed by large amounts of vegetative mycelium. The whole structure is called a fruit body or sporocarp and is used as a major taxonomic feature. They can become large enough to be seen with the naked eye. Flask-shaped sexual reproductive bodies are called perithecia, cup-shaped bodies are called apothecia, and closed bodies are called cleistothecia. These structures have evolved to protect the asci and assist in spore dispersal, but the hymenium itself is unaffected by the presence of water. 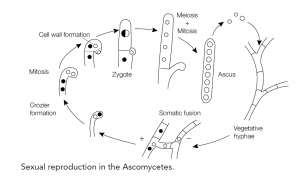 ▶Reproduction in the Dikarya: Basidiomycota

This group of fungi is characterized by the most complex and large structures found in the fungi. They are also distinctive in that they very rarely produce asexual spores. Much of the life cycle is spent as vegetative mycelium, exploiting complex substrates. A preliminary requisite for the onset of sexual reproduction is the acquisition of two mating types of nuclei by the fusion of compatible hyphae. Single representatives of the two mating type nuclei are held within every hyphal compartment for extended periods of time. This is termed a dikaryotic state, and its maintenance requires elaborate septum formation during growth and nuclear division.

Onset of sexual spore formation is triggered by environmental conditions and begins with the formation of a fruit body primordium. Dikaryotic mycelium expands and differentiates to form the large fruit bodies we recognize as mushrooms and toadstools. Diploid formation and meiosis occur within a modified hyphal tip called a basidium.

Four spores are budded from the basidium. Basidia form together to create a hymenium, which is highly sensitive to the presence of free water. The hymenium is distributed over sterile, dikaryotic-supporting tissues that protect it from rain. The hymenium can be exposed on gills or pores beneath the fruit body, seen in the toadstools and bracket fungi, or enclosed within chambers as in the puffballs and truffles.

Fungi have two conflicting requirements for their spores. Spores must allow fungi to spread, but they must also allow them to survive adverse conditions. These requirements are met by different types of spores. Small, light spores are carried furthest from parent mycelium in air and these are the dispersal spores. They are usually the products of asexual sporulation, the sporangiospores and the conidiospores, and so spread genetically identical individuals as widely as possible. Genetic diversity is maintained by sexual reproduction, and the spore products are often large resting spores that withstand adverse conditions but remain close to their site of formation. Spores therefore vary greatly in size, shape, and ornamentation, and this variation reflects specialization of purpose.

Spores that have a dispersal function can be released from their parent mycelium by active or passive mechanisms. As many spores are wind-dispersed, they are produced in dry friable masses that are passively discharged by wind. Other spores are passively discharged by water droplets splashing spores away from parent mycelium. Fungal spores can be actively discharged by explosive mechanisms. These mechanisms use a combination of an increasing turgor pressure within the spore-bearing hypha, combined with an inbuilt weak zone of the hyphal wall. This ensures that when the hypha bursts the spore discharge is directed for maximum distance. Asci are usually dispersed in this way, and a few sporangia too. Basidiospores are also actively discharged. 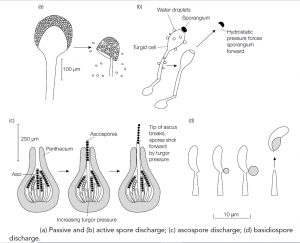 Airborne fungal spores can be carried great distances. Their presence in the air can have an impact on human health as they can cause allergic rhinitis (hay fever) and asthma. Many plant diseases that cause significant economic losses are airborne. Spore clouds can be tracked across continents, and epidemic disease forecasts can be made, depending on weather conditions and counts of air spora.