Two complex DNA-binding factors have been identified which are required for tRNA transcription initiation by RNA Pol III . TFIIIC binds to both the A and B boxes in the tRNA promoter. TFIIIB binds 50 bp upstream from the A box. TFIIIB consists of three subunits, one of which is TBP, the general initiation factor required by all three RNA polymerases. The second is called BRF (TFIIB-related factor, since it has homology to TFIIB, the RNA Pol II initiation factor). The third subunit is called B’’. TFIIIB has no sequence specificity and therefore its binding site appears to be determined by the position of TFIIIC binding to the DNA. TFIIIB allows RNA Pol III to bind and initiate transcription. Once TFIIIB has bound, TFIIIC can be removed without affecting transcription. TFIIIC is therefore an assembly factor for the positioning of the initiation factor TFIIIB. 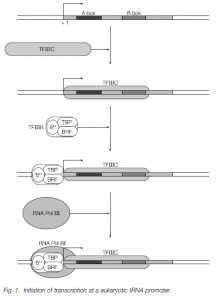 ▶5S rRNA genes: RNA Pol III transcribes the 5S rRNA component of the large ribosomal subunit. This is the only rRNA subunit to be transcribed separately. Like the other rRNA genes which are transcribed by RNA Pol I, the 5S rRNA genes are tandemly arranged in a gene cluster. In humans, there is a single cluster of around 2000 genes. The promoters of 5S rRNA genes contain an internal control region called the C box which is located 81–99 bp downstream from the transcription start site. A second sequence termed the A box around bases +50 to +65 is also important. 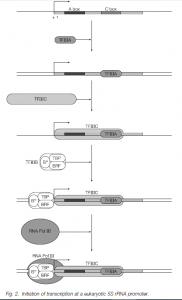 The C box of the 5S rRNA promoter acts as the binding site for a specific DNA-binding protein, TFIIIA . TFIIIA acts as an assembly factor which allows TFIIIC to interact with the 5S rRNA promoter. The A box may also stabilize TFIIIC binding. TFIIIC is then bound to the DNA at an equivalent position relative to the start site as in the tRNA promoter. Once TFIIIC has bound, TFIIIB can interact with the complex and recruit RNA Pol III to initiate transcription.

▶RNA Pol III termination: Termination of transcription by RNA Pol III appears only to require polymerase recognition of a simple nucleotide sequence. This consists of clusters of dA residues whose termination efficiency is affected by surrounding sequence. Thus the sequence 5_-GCAAAAGC-3_ is an efficient termination signal in the Xenopus borealis somatic 5S rRNA gene.

▶RNA polymerase III: RNA polymerase III (RNA Pol III) has 16 or more subunits. The enzyme is located in the nucleoplasm and it synthesizes the precursors of 5S rRNA, the tRNAs and other small nuclear and cytosolic RNAs.

▶tRNA genes: Two transcription control regions, called the A box and the B box, lie downstream from the transcription start site. These sequences are therefore both conserved sequences in tRNAs but also conserved promoter sequences in the DNA. TFIIIC binds to the A and B boxes in the tRNA promoter; TFIIIB binds to the TFIIIC–DNA complex and interacts with DNA upstream from the TFIIIC-binding site. TFIIIB contains three subunits, TBP, BRF and B’’, and is responsible for RNA Pol III recruitment and hence transcription initiation.

▶5S rRNA genes: The genes for 5S rRNA are organized in a tandem cluster. The 5S rRNA promoter contains a conserved C box 81–99 bases downstream from the start site, and a conserved A box at around 50–65 bases downstream. TFIIIA binds strongly to the C box promoter sequence. TFIIIC then binds to the TFIIIA–DNA complex, interacting also with the A box sequence. This complex allows TFIIIB to bind, recruit the polymerase, and initiate transcription.

▶RNA Pol III termination: The RNA polymerase can terminate transcription without accessory factors. A cluster of A residues is often sufficient for termination.