▶Ribosomal RNA genes:  RNA polymerase I (RNA Pol I) is responsible for the continuous synthesis of rRNAs during interphase. Human cells contain five clusters of around 40 copies of the rRNA gene situated on different chromosomes. Each rRNA gene produces a 45S rRNA transcript which is about 13 000nt long. This transcript is cleaved to give one copy each of the 28S RNA (5000nt), 18S (2000nt) and 5.8S (160nt) rRNA.

The continuous transcription of multiple gene copies of the RNAs is essential for sufficient production of the processed rRNAs which are packaged into ribosomes. 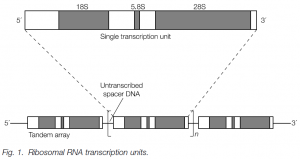 ▶Role of the nucleolus: Each rRNA cluster is known as a nucleolar organizer region, since the nucleolus contains large loops of DNA corresponding to the gene clusters. After a cell emerges from mitosis, rRNA synthesis restarts and tiny nucleoli appear at the chromosomal locations of the rRNA genes. During active rRNA synthesis, the pre-rRNA transcripts are packed along the rRNA genes and may be visualized in the electron microscope as ‘Christmas tree structures’. In these structures, the RNA transcripts are densely packed along the DNA and stick out perpendicularly from the DNA. Short transcripts can be seen at the start of the gene, which get longer until the end of the transcription unit, which is indicated by the disappearance of the RNA transcripts.

▶Upstream binding factor: A specific DNA-binding protein, called upstream binding factor, or UBF, binds to the UCE. As well as binding to the UCE, UBF binds to a sequence in the upstream part of the core element. The sequences in the two UBF-binding sites have no obvious similarity. One molecule of UBF is thought to bind to each sequence element. The two molecules of UBF may then bind to each other through protein–protein interactions, causing the intervening DNA to form a loop between the two binding sites. A low rate of basal transcription is seen in the absence of UBF, and this is greatly stimulated in the presence of UBF. 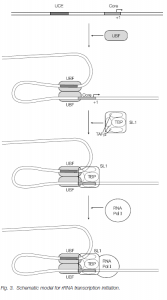 ▶TBP and TAFIs: SL1 has now been shown to contain several subunits, including a protein called TBP (TATA-binding protein). TBP is required for initiation by all three eukaryotic RNA polymerases, and seems to be a critical factor in eukaryotic transcription. The other three subunits of SL1 are referred to as TBP-associated factors or TAFs, and those subunits required for RNA Pol I transcription are referred to as TAFIs.

▶Other rRNA genes: In Acanthamoeba, a simple eukaryote, there is a single control element in the promoter region of the rRNA genes around 12–72 bp upstream from the transcription start site. A factor named TIF-1, a homolog of SL1, binds to this site and allows binding of RNA Pol I and transcription initiation. When the polymerase moves along the DNA away from the initiation site, the TIF-1 factor remains bound, permitting initiation of another polymerase and multiple rounds of transcription. This is therefore a very simple transcription control system. It seems that vertebrates have evolved an additional UBF which is responsible for sequence-specific targeting of SL1 to the promoter.

▶Role of the nucleolus: Pre-rRNA is synthesized by RNA polymerase I (RNA Pol I) in the nucleolus. The arrays of rRNA genes loop together to form the nucleolus and are known as nucleolar organizer regions.

▶TBP and TAFIs: SL1 is made up of four subunits. These include the TATA-binding protein (TBP) which is required for transcription initiation by all three RNA polymerases. The other factors are RNA Pol I-specific TBP-associated factors called TAFIs.

▶Other rRNA genes: Acanthamoeba has a simple transcription control system. This has a single control element and a single factor TIF-1, which are required for RNA Pol I binding and initiation at the rRNA promoter.