Role of MicroRNAs in cancer Therapeutics

Role of MicroRNAs in Cancer Therapeutics

Several mechanisms have been put forward for abnormal expression of miRNAs during cancer:

1. The discovery of miRNA loci at a chromosome breakpoint and specific genomic regions associated with cancer
2. The expression of miRNA may be influenced by the regulation of epigenetic silencing such as methylation and histone-modification losses.
3. Failure of the Drosha-processing step leads to widespread deregulation of the miRNAs
4. The processing of miRNA may be influenced by the point mutation of the precursor miRNA
5. Impairment of the miRNA function by introducing mutations in the target sequence 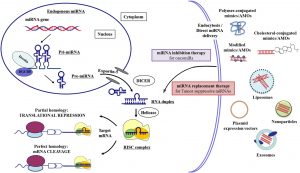 microRNAs and the possible mechanisms.