Septicemia occurs when organisms are actively multiplying in the blood. Many different bacteria (and a few fungi) can cause this condition. Patients suffering from these infections are sometimes described as “septic.” One infection that should be considered in cases of aggressive septicemia, especially if respiratory symptoms are also present, is anthrax.

Fever is a prominent feature of septicemia. The patient appears very ill and may have an altered mental state, shaking chills, and gastrointestinal symptoms. Often an increased breathing rate is exhibited, accompanied by respiratory alkalosis (increased tissue pH due to breathing disorder). Low blood pressure is a hallmark of this condition and is caused by the inflammatory response to infectious agents in the bloodstream, which leads to a loss of fluid from the vasculature. This condition is the most dangerous feature of the disease, often culminating in death.

The vast majority of septicemias are caused by bacteria, and they are approximately evenly divided between gram positives and gram-negatives. Perhaps 10% are caused by fungal infections. Polymicrobial bloodstream infections increasingly are being identified in which more than one microorganism is causing the infection.

Gram-negative bacteria multiplying in the blood release large amounts of endotoxin into the bloodstream, stimulating a massive inflammatory response mediated by a host of cytokines. This response invariably leads to a drastic drop in blood pressure, a condition called endotoxic shock. Grampositive bacteria can instigate a similar cascade of events when fragments of their cell walls are released into the blood.

In many cases, septicemias can be traced to the parenteral introduction of the microorganisms via intravenous lines or surgical procedures. Other infections may arise from serious urinary tract infections or from renal, prostatic, pancreatic, or gallbladder abscesses. Patients with underlying spleen malfunction may be predisposed to the multiplication of microbes in the bloodstream. Meningeal infections or pneumonia occasionally can lead to sepsis. Approximately half a million cases occur each year in the United States, resulting in more than 100,000 deaths.

Because the infection is in the bloodstream, a blood culture is an obvious route to diagnosis. A full regimen of media should be inoculated to ensure isolation of the causative microorganism. Antibiotic susceptibilities should be assessed. Empiric therapy should be started immediately before culture and susceptibility results are available. The choice of antimicrobial agent should be informed by knowledge of any suspected source of the infection, such as an intravenous catheter (in which case, skin biota should be considered), urinary tract infections (in which case, gram-negatives and Streptococci should be considered), and so forth.

Empiric therapy, which is begun immediately after blood cultures are taken, often begins with a broad-spectrum antibiotic. Once the organism is identified and its antibiotic susceptibility is known, treatment can be adjusted accordingly. 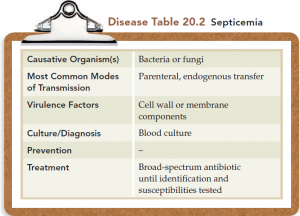