Single-celled organisms, such as Bacteria, can face enormous changes in their external environment over very short periods of time. If we consider Escherichia coli and its life cycle, we can see how significant these changes are. In its normal habitat of the colon, the E. coli cell is kept at a more or less constant temperature of 37°C, is surrounded by other microbes and nutrients (in the form of partly or completely digested food), and is in a low-oxygen environment. After excretion, and before the cell re-enters the digestive system of the same or a different host, E. coli is suddenly thrust into a colder, well oxygenated, more aqueous, and nutrient-poor situation. To be able to cope with all these changes in lifestyle, the cell must quickly turn off some genes and turn on others. At the gene level the switches are repressor and activator proteins, while at the protein level enzymes can be switched on or off by the presence or absence of metabolites. These cytoplasmic responses have come into effect due to changes outside the cell, and the way in which an indicator that the outside world has changed is carried from the cell wall and to the genes or proteins that might be involved in a response is called signal transduction.

Some molecules that have a significant effect on the cell are small and can diffuse or be actively transported. Once in the cell they can have a direct effect on their target, for example, sugars such as lactose, and alcohols such as methanol. However, some useful growth components must be isolated from the cytoplasmic contents (cyanide, formaldehyde, and even oxygen can be used for growth but are also cytotoxic) or are unable to pass easily through the cell wall and membrane (large molecules such as polydextrans). Other changes on the outside of the cell must be transformed into a signal that enzymes can recognize. Change in pH, ultraviolet light or heat are pertinent examples. Even the enzymes of extremophiles can only tolerate relatively small ranges of heat and pH, yet the cell as a whole can survive a greater range of temperature or acidity. Rather than let environmental changes into the cell directly, at their external concentrations, the exterior of the cell has developed systems to sense change and then relay that change to a target. Frequently this relay involves the transfer of phosphate groups from a sensor protein onto one or more relay proteins and finally to the effector protein. For this reason it is sometimes called a phospho-relay pathway.

When we examine cell response pathways it is convenient to think of them as linear pathways in which a sensor relays a series of phosphate molecules via a defined set of proteins to an effector. In the cytoplasm, the translocation of a signal from sensor to effector is certainly much more branched, with overlapping sets of relay proteins accepting phosphates from many different sensors. For this reason our understanding of the entire process of cellular sensing has become intertwined with computational techniques such as neural networking. To gain access to the entire branched cellular response, we must first understand simple examples such as two-component regulatory systems, and then develop it to look at a more global response such as the effect of oxygen on the cell or chemotaxis.

Taken in isolation, the simplest bacterial sensing system allows the cell to adapt to an external factor by means of two protein components: a sensor kinase and a response regulator. The sensor kinase is buried so that there is an environmental signal binding site outside the cell membrane, and an ATP binding cassette on the cytoplasmic side of the cell membrane. Binding of an external molecule causes conformational change across the whole protein, and the protein on the inner membrane is now able to transfer a phosphate group from ATP to a relay protein. In some cases this relay protein is a transcriptional regulator. 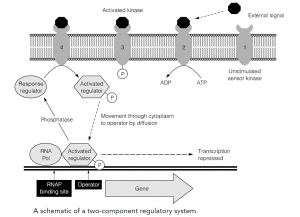 One of the more frequent changes all microorganisms face is a change in the external oxygen tension. Some organisms can adapt between oxygen concentrations equivalent to atmospheric levels and almost completely anoxic conditions. These facultative anaerobes, such as E. coli, achieve this by changing the terminal electron acceptor used in oxidative phosphorylation. Under aerobic conditions they use water as a terminal electron acceptor and cytochrome aa3 oxidase. In the absence of oxygen and the presence of fumarate, cytochrome aa3 oxidase is switched off and the fumarate/nitrate system is switched on. The primary sensor for this oxygen-dependent switch is a regulatory protein called FNR (after fumarate and nitrate reduction). This is a global regulator in that it alters the transcriptional properties of hundreds of E. coli genes, acting as an inhibitor of some while elevating the transcription of others. The group of promoters and genes that are regulated by FNR are known collectively as the FNR regulon, and are all characterized by a distinct sequence in the relevant operator, an FNR binding site. Where FNR acts as an activator, the FNR binding site replaces the –35 sequence of the standard s70 promoter, so that transcription cannot take place unless active FNR is present. The FNR binding site is found in a similar place to the LacI binding site whenFNR is acting as a repressor.

The way in which FNR senses the presence of molecular oxygen is based more on chemistry than molecular biology. In the absence of oxygen, a cluster of iron and sulfur molecules forms at the N-terminal end of the protein, which allows FNR to dimerize and interact with DNA at its specific binding sites. When oxygen is present, the [2Fe–2S]2+ cluster is destroyed and the protein can no longer function in DNA binding. This oxygen sensing capability is carried out in concert with a number of other regulons, such as the Arc cluster. CRP participates in another regulon as well, and it is interesting to note that the binding sites for FNR and CRP differ by only one base pair, raising the possibility that a considerable amount of crosstalk occurs between regulatory systems, allowing the cell to simultaneously adapt to many conditions at once.

Microorganisms, by definition, exist on a microscopic scale, and this means that, in relative terms, separation from a food source by only a few millimeters presents an enormous challenge. Most bacteria have some form of motility, using pili or gliding, or merely by extending colony size. To conserve energy, movement must not be random, depending on a chance encounter with a food source, but directed. The sensing process provides this direction. If movement is towards an organic compound, this is named chemotaxis, but other forms of taxis exist. These include geotaxis (movement towards or away from gravity) and phototaxis (movement towards or away from light). The best understood chemotactic system is formed by the Che proteins, present in many Gram-negative Bacteria.

In response to the presence of a suitable carbon source (the inducer), a transducer (MCP) forms a complex with a sensor kinase, CheA. The transducer functions as a medium to pass a signal from the periplasm and across the cytoplasmic membrane. Unlike the more simple two-component sensors, the transducer and sensor kinase interaction is mediated by a coupling protein, CheW. However, the result is still the phosphorylation of CheA. The signal is carried through the cytoplasm by transfer of the phosphate group to CheY. Phosphorylated CheY-P has a direct interaction with the flagellar motor switch, changing the direction of rotation. Once CheY-P has acted on the motor, it is dephosphorylated by CheZ  and rotation continues in the original anticlockwise direction.

As the microbe approaches the food source, and the concentration of the inducer changes, the cell must adapt its chemotactic response so as not to overshoot. This adaptation is provided by the second phospho-relay protein, CheB. A methylation protein, CheR, is constantly methylating the transducer, but CheB can demethylate the transducer. The number of methyl groups attached to the transducers in the cell membrane influences the efficiency of sensor kinase phosphorylation. The competition to methylate (ChyR) or demethylate (CheB) the transducer adapts the cell’s response to a stimulant. 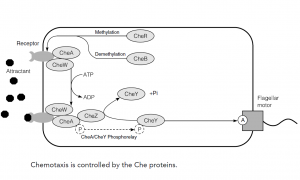