Largely through the World Health Organization’s comprehensive global efforts, naturally occurring smallpox is now a disease of the past. However, after the terrorist attacks on the United States on September 11, 2001, and the anthrax bioterrorism shortly thereafter, the U.S. government began taking the threat of smallpox bioterrorism very seriously. Vaccination, which had been discontinued, was once again offered to certain U.S. populations. After languishing in obscurity since its elimination from humans in the 1970s, smallpox was back in the news.

Infection begins with fever and malaise, and later a rash begins in the pharynx, spreads to the face, and progresses to the extremities. Initially, the rash is macular, evolving in turn to papular, vesicular, and pustular before eventually crusting over, leaving nonpigmented sites pitted with scar tissue. There are two principal forms of smallpox, variola minor and variola major. Variola major is a highly virulent form that causes toxaemia, shock, and intravascular coagulation. People who have survived any form of smallpox nearly always develop lifelong immunity. 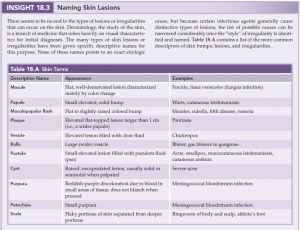 It is vitally important for health care workers to be able to recognize the early signs of smallpox. The diagnosis of even a single suspected case must be treated as a health and law enforcement emergency. The symptoms of variola major progress as follows: After the prodrome period of high fever and malaise, a rash emerges, first in the mouth. Severe abdominal and back pain sometimes accompany this phase of the disease. As lesions develop, they break open and spread the virus into the mouth and throat, making the patient highly contagious. A rash appears on the skin and spreads throughout the body within 24 hours.

By the third or fourth day of the rash, the bumps become larger and fill with a thick opaque fluid. A major distinguishing feature of this disease is that the pustules are indented in the middle. Also, patients report that the lesions feel as if they contain a BB pellet. Within a few days,

these pustules begin to scab over. After 2 weeks, most of the lesions will have crusted over; the patient remains contagious until the last scabs fall off because the crusts contain the virus. During the entire rash phase, the patient is very ill. A patient with variola minor has a rash that is less dense and is generally less ill than someone with variola major.

The causative agent of smallpox, the variola virus, is an orthopoxvirus, an enveloped DNA virus. Variola is shaped like a brick and is 200 nanometers in diameter. Other members of this group are the monkeypox virus and the vaccinia virus from which the smallpox vaccine is made. Variola is a hardy virus, surviving outside the host longer than most viruses.

The infection begins by implantation of the virus in the nasopharynx. The virus invades the mucosa and multiplies in the regional lymph nodes, leading to viremia. Variola multiplies within white blood cells and then travels to the small blood vessels in the dermis. The lesions occur at the dermal level, which is the reason that scars remain after the lesions are healed. Much of the research on smallpox was suspended after its eradication from the human population. However, the virus genome has been sequenced, and scientists are once again studying how it causes damage to the host. It is turning out to be more difficult than expected to determine why it is so virulent. Scientists discovered the puzzling fact that the much tamer vaccinia virus has more genes that code for immune evasion proteins than does the virulent variola virus.