Dead skin cells and sebum oils combine beneath the penis foreskin and appear as small white lumps. This is known as smegma. While it may be alarming when first noticed, it is a natural occurrence and helps to promote lubrication between the glans and the foreskin. Smegma should be removed through normal washing processes, but in some cases when hygiene is low or washing under the foreskin difficult, smegma may build up and causes problems further down the track. Regular washing, penis health cremes, and medications may be required to control smegma.

Smegma is present beneath the foreskin of all men as the skin is constantly producing it, but it is not always apparent. When it does become visible, smegma appears as moist white materials forming into tiny balls between the glans and foreskin. While smegma is odorless, in some cases when hygiene is very poor smegma can harden into “smegma stones” which can be highly uncomfortable. Eventually, hardened smegma can cause cultures of bacteria under the foreskin to increase, and raise the risk of infection and disease. If smegma appears with other symptoms such as itching, inflammation, or pain, check with your doctor to rule out sexually transmitted diseases or yeast infections. 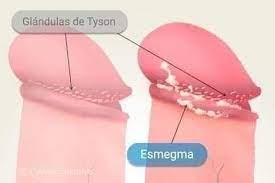 Hygiene: Why don’t all men experience smegma? It depends upon the differences in hygiene habits, as washing beneath the foreskin will remove exfoliated skin cells before they can gather sebum oils and become visible smegma. According to a review of research published in The Journal of the European Academy of Dermatology and Venerology in 2006, researchers have determined that smegma is made up of dead skin cells, oil, prostate secretions, sex hormones, and white blood cells. Doctors used to believe that smegma could cause diseases, like prostate cancer, but scientists now understand that smegma is common in adolescents and adult men. It helps to lubricate the space between the head of the penis and the foreskin, and may even have antibacterial and antifungal properties.

Men who experienced difficulty retracting their foreskin back and exposing the head of their penis may have a condition known as phimosis. Most often congenital, phimosis may also be the cause of trauma, infection, or scarring. Due to the difficulty in retracting the foreskin, hygiene and cleaning are very difficult in many cases, making the presence of smegma more likely. According to a study published in The Journal of Urology in 1973, men with phimosis are almost twice as likely to experience smegma as men without phimosis. If cleaning of the space beneath the foreskin is too difficult and does not remove smegma properly, circumcision or partial circumcision may be required to prevent discomfort and the onset of disease.

Washing: Smegma is a natural lubricant and antibacterial agent, but it can build up if penis hygiene is not performed regularly. Regular cleaning of the penis glans beneath the foreskin with soap and warm water helps to remove exfoliated skin cells and keep them from accumulating. This good hygiene practice should be completed every day, especially in men with a tendency for developing smegma, as a preventative measure.

Medications: In some cases, antibiotics can have a regulatory effect on sebum oil glands in the skin, and may benefit cases of several smegma build-ups when the cause is not due to phimosis or poor hygiene. Antibiotics are commonly used for severe cases of acne, though they take several months to take full effect on the sebum oil glands. Antibiotics can cause side effects in some cases, such as poor immune function, gut dysbiosis, and digestive problems. Check with your doctor to find out if antibiotics are appropriate for you.

Crèmes: Penis health Crèmes can help to balance sebum oil glands beneath the foreskin, and keep penis skin moisturized. Many men experience dry skin on their penis, glans, and foreskin, due to the high amount of soap they have to use to remove smegma build-up. Special topical formulas (most health professionals recommend Man1 Man Oil) containing nutrients such as vitamin E, C, A, B3, and shea butter may help to support normal skin regeneration, soften dried smegma that’s become hardened, and keep the penis skin healthy.