Endospores are oval or round-shaped bodies of small sizes formed inside microbial cells. The spores are produced in the course of microbial propagation at certain environmental conditions.

Unlike in fungi, the spores in bacteria are not used for their reproduction, but for survival in case of worsened living state.

The spores in bacteria can be positioned in the center of the cell (centrally) as for B. anthracis; directly at the ends of their cells or terminally (C. tetani); and subterminally nearby the ends of bacteria (e.g., C. botulinum).

Spore carriage leads to characteristic appearance of many bacterial species. For instance, C. botulinum with subterminal spores looks like tennis racket, and C. tetani resembles drumstick with its terminal spores. Sporulation occurs in natural or artificial surroundings (e.g., on nutrient media), but in most cases it doesn’t occur within living tissues during infection.

The beginning of sporulation (preparatory stage) is determined by concentration of the cytoplasm and condensation of the nucleoid in a certain region of bacterial cell (sporogenic zone).

At forespore stage the nascent spore is gradually separated from vegetative part of bacterial cell.

At the end of sporulation the vegetative part of the cell dissolves under the action of autolysins (maturation stage).

Spore formation usually takes from 10 to 20 hours to develop.

Germination of spore occurs in favorable conditions (increased humidity, warming of the local environment, the rise of nutrients concentration, etc.). It is characterized by spore enlargement and swelling after water accumulation that is followed by activation of bacterial metabolism.

Usually the spore is capable of propagating only after several days of rest. The process of germination comprises three consecutive stages.

Activation stage starts from various external stimuli. Amelioration of the environment or, conversely, damage of the spore shell by heat, acidity or abrasion provoke spore activation.

Stressing of spore leads to beginning of spore germination (initiation stage). It is followed by autolysins activation that dissolve cortical murein with the release of calcium dipicolinate. Hydrolytic enzymes rapidly eliminate the components of spore wall.

Outgrowth stage is characterized by formation of protrusion out from the spore wall. This leads to spore transformation into rod-like vegetative bacterial cell. The nascent bacterial cell starts to grow and then propagates.

The spores are highly stable in the environment. They maintain viability in soil for many years (e.g., more than 40-50 years for spores of B. anthracis or C. tetani). The spores of some bacilli can withstand boiling and demonstrate high resistance to conventional disinfectants. They are killed by autoclaving or by exposure to dry heat in Pasteur oven at 160-180°C for 2 hours.

A rigid coat of spore is poorly permeable for aniline dyes. Therefore, the spores are almost not stained by conventional staining methods and look like transparent glistening bodies within colored microbial cells.

To make spore walls more permeable, various mordants can be applied, e.g. hydrochloric acid and carbol fuchsin in Ozheshko stain or steamed carbol fuchsin in Moeller spore stain. In both cases the spore becomes red on the blue background of vegetative part of the cell. 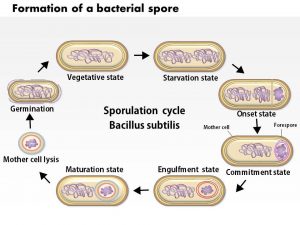