This syndrome is another dermolytic condition caused by Staphylococcus aureus. It affects mostly newborns and babies, although children and adults can experience the infection. Newborns are susceptible when sharing a nursery with another newborn who is colonized with S. aureus.

Transmission may occur when caregivers carry the bacterium from one baby to another. Adults in the nursery can also directly transfer S. aureus because approximately 30% of adults are asymptomatic carriers. Carriers can harbor the bacteria in the nasopharynx, axilla, perineum, and even the vagina. (Fortunately, only about 5% of S. aureus strains are lysogenized by the type of phage that codes for the toxins responsible for this disease.) This condition can be thought of as a systemic form of impetigo. Like impetigo, it is an exotoxin-mediated disease. The phage-encoded exfoliative toxins A and B are responsible for the damage. Unlike impetigo, the toxins enter the bloodstream from some focus of infection (the throat, the eye, or sometimes an impetigo infection) and then travel to the skin throughout the body. These toxins cause bullous lesions, which often appear first around the umbilical cord (in neonates) or in the diaper or axilla area.

The lesions begin as red areas, take on the appearance of wrinkled tissue paper, and then form very large blisters. Fever may precede the skin manifestations. Eventually, the top layers of epidermis peel off completely. The split occursin the epidermal tissue layers just above the stratum basale. Widespread desquamation of the skin follows, leading to the burned appearance referred to in the name.

At this point, the protective keratinized layer is gone, and the patient is vulnerable to secondary infections, cellulitis, and bacteremia. In the absence of these complications, young patients nearly always recover if treated promptly. Adult patients have a higher mortality rate—as high as 50%. Once a tentative diagnosis of SSSS is made, immediate antibiotic therapy should be instituted.

It is important, however, to differentiate this disease from a similar skin condition called toxic epidermal necrolysis (TEN), which is caused by a reaction to antibiotics, barbiturates, or other drugs. TEN has a significant mortality rate. The treatments for the two diseases are very different, so it is important to distinguish between them before instituting therapy. In TEN, the split in skin tissue occurs between the dermis and the epidermis, not within the epidermis as is the case with SSSS. Histological examination of tissue from a lesion is usually a better way to diagnose the disease than reliance on culture. Because SSSS is caused by the dissemination of exotoxin, S. aureus may not be found in lesions. Nevertheless, culture should be attempted so that antibiotic sensitivities can be established. 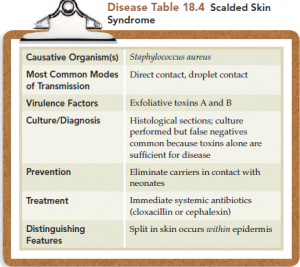 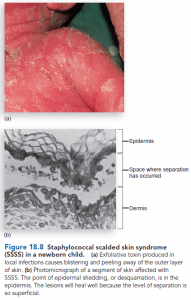