Influenza virus of A and B types contains single-stranded negative RNA, which is segmented into 8 fragments (RNA of type C viruses contains 7 fragments without neuraminidase gene). It is lipid enveloped virus of spherical shape.

The diameter of viral particles varies in the range of 80-120 nm. Viral nucleocapsid is of helical symmetry.

Viral H is a major viral receptor that binds to sialic acid residues of receptors of upper respiratory tract epithelial cells. It is able to agglutinate the erythrocytes of different species.

Viral N is the sialidase enzyme that hydrolizes sialic acid in external mucous layer of respiratory tract, thus facilitating viral entry. Also this enzyme is essential for virion release, as it prevents viral particles self-aggregation. Both of the proteins are of strong antigenic activity, causing neutralizing antibodies production.

Certain viral non-structural proteins can be regarded as virulence factors of virus.

Segmented genomic RNA of influenza viruses encoding hemagglutinin and neuraminidase is capable of gene segment re-assemblage, known as genetic reassortment. After possible mixed inoculation of the cell by the viruses of different types (e.g., H1N1 and H3N2) the reassortment can take place, resulting in new influenza virus subtype formation.

Genetic reassortment ensures sharp viral genomic changes, called genetic shift. The shift usually occurs between the genomes of type A human and avian influenza viruses after possible coinfection. This coinfection may occur in the cells of pig host. It leads to the rapid creation of a new virus subtype.

Influenza В and С viruses are deprived of antigenic shift because of little spread of related viruses in animals.

Genetic drift means the minor genetic variations of viral protein-encoding sequences, ensuing from the point mutations in these genes. It leads to gradual viral escape from the action of host specific antibodies.

Influenza viruses are relatively stable to cooling and can survive at temperature 0-4oC. They are inactivated at 65°C in 5-10 minutes. These viruses are sensitive to all disinfectants, ether and other organic solvents, UV light and to acidic pH. 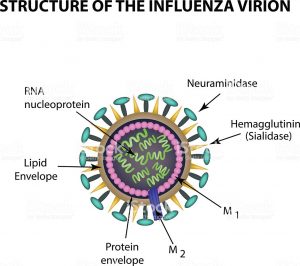