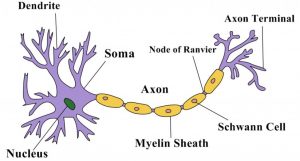 (a) The central neural system (CNS)

(b) The peripheral neural system (PNS)

Types of Nerve Fibres of the PNS

The nerve fibres of the PNS are of two types :

The peripheral neural system is further divided into two divisions:

Structurally and functionally, the ANS is further classified into two separate sub-systems called

NEURON AS STRUCTURAL AND FUNCTIONAL UNIT OF

Generation and conduction of Nerve impulse (Physiology of Nerve) 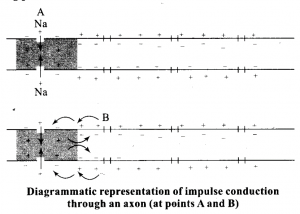 Active and passive ion movements across the cell surface of an axon. The movements are responsible for the generation of a negative potential inside the axon. This is called the resting potential. 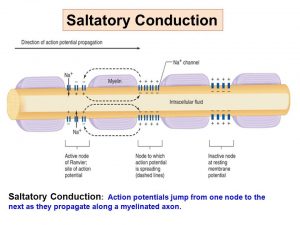 Synapse : A nerve impulse is transmitted from one neuron to another through junctions called synapses.

A synapse is formed by the membranes of a pre-synaptic neuron and a post-synaptic neuron, which may or may not be separated by a gap called synaptic cleft.

Pre-synaptic neuron :That neuron which is

transmitting the impulse to the other neuron and is present before the synaptic cleft is called the pre-synaptic neuron. 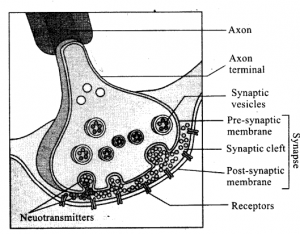 There are two types of synapses, namely, 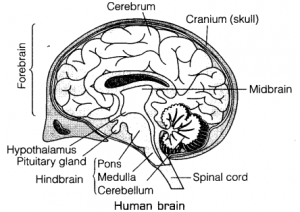 It is small & posterior part of fore brain. It is covered by cerebrum. It consist of thalamus, hypothalamus, epithalamus.

The inner parts of cerebral hemispheres and a

3)Epithalamus -It forms the roof of diencephalon. Pineal body is found in epithalamus.

Function of Pons :-It regulates the breathing reaction through pneumotaxic centre.

Sensory organs detect all types of changes in the environment and send appropriate signals to the CNS, 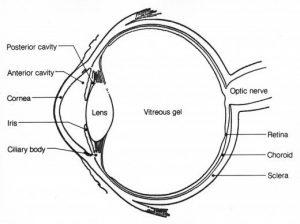 These are photosensitive organs.

The  wall of remaining eye ball has three layers.

It is the outermost covering of eye ball. It is composed af dense connective tissue.The layer is divided into two parts

Inner layer of eyelids remain stretched over anterior part of sclera (limbus) in the form of translucent membrane.

It is the middle layer of eyeball.

This layer has three parts :-

It is the inner most layer of eye ball

The inner layer is the retina and it contains three layers of neural cells from inside to outside – ganglion cells, bipolar cells and photoreceptor cells.

There are two types of photoreceptor cells, namely, rods and cones. 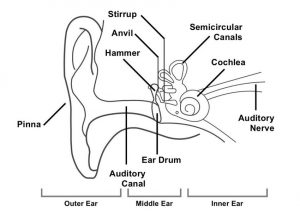 All the vertebrates have one pair of ears back to the eyes,

There are two main functions of ears:-

Structurally ear may be divided into three parts :-

Other internal parts of Ear 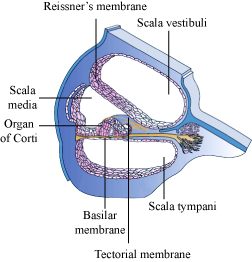