Tetanus is a neuromuscular disease whose alternate name, lockjaw, refers to an early effect of the disease on the jaw muscle. The etiologic agent, Clostridium tetani, is a common resident of cultivated soil and the gastrointestinal tracts of animals. It is a gram-positive, spore-forming rod. The endospores it produces often swell the vegetative cell. Spores are produced only under anaerobic conditions.

C. tetani release a powerful neurotoxin, tetanospasmin, that binds to target sites on peripheral motor neurons, spinal cord and brain, and in the sympathetic nervous system. The toxin acts by blocking the inhibition of muscle contraction. Without inhibition of contraction, the muscles contract uncontrollably, resulting in spastic paralysis. The first symptoms are clenching of the jaw, followed in succession by extreme arching of the back, flexion of the arms, and extension of the legs. Lockjaw confers the bizarre appearance of risus sardonicus (sardonic grin), which looks eerily as though the person is smiling. Death most often occurs due to paralysis of the respiratory muscles and respiratory arrest. 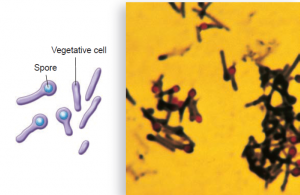 The mere presence of spores in a wound is not sufficient to initiate infection because the bacterium is unable to invade damaged tissues readily. It is also a strict anaerobe, and the spores cannot become established unless tissues at the site of the wound are necrotic and poorly supplied with blood, conditions that favour germination. As the vegetative cells grow, various metabolic products are released into the infection site, including the tetanospasmin toxin.

The toxin spreads to nearby motor nerve endings in the injured tissue, binds to them, and travels via axons to the ventral horns of the spinal cord. The toxin blocks the release of neurotransmitter, and only a small amount is required to initiate the symptoms. The incubation period varies from 4 to 10 days, and shorter incubation periods signify a more serious condition. The muscle contractions are intermittent and extremely painful, and they may be forceful enough to break bones, especially the vertebrae. The fatality rate, ranging from 10% to 70%, is highest in cases involving delayed medical attention, a short incubation time, or head wounds. Full recovery requires a few weeks, and no permanent damage to the muscles usually remains. 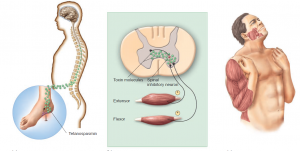 Spores usually enter the body through accidental puncture wounds, burns, umbilical stumps, frostbite, and crushed body parts. The incidence of tetanus is low in North America. Most cases occur among geriatric patients and intravenous drug abusers. The incidence of neonatal tetanus— predominantly the result of an infected umbilical stump or circumcision—is higher in cultures that apply dung, ashes, or mud to these sites to arrest bleeding or as a customary ritual. The disease accounts for several hundred thousand infant deaths a year worldwide.

Tetanus treatment is aimed at deterring the degree of toxaemia and infection and maintaining patient homeostasis. A patient with a clinical appearance suggestive of tetanus should immediately receive antitoxin therapy with human tetanus immune globulin (TIG). Although the antitoxin inactivates circulating toxin, it will not counteract the effect of toxin already bound to neurons. Other methods include thoroughly cleansing and removing the afflicted tissue, controlling infection with penicillin or tetracycline, and administering muscle relaxants.

The patient may require the assistance of a respirator, and a tracheotomy is sometimes performed to prevent respiratory complications such as aspiration pneumonia or lung collapse. Tetanus is one of the world’s most preventable diseases, chiefly because of an effective vaccine containing tetanus toxoid.

The recommended vaccination series for 1- to 3-month old babies consists of three injections given 2 months apart, followed by booster doses about 1 and 4 years later. Children thus immunized probably have protection for 10 years. Additional protection against neonatal tetanus may be achieved by vaccinating pregnant women, whose antibodies will be passed to the fetus. Toxoid should also be given to injured persons who have never been immunized, have not completed the series, or whose last booster was received more than 10 years previously. The vaccine can be given simultaneously with passive TIG immunization to achieve immediate as well as long-term protection. 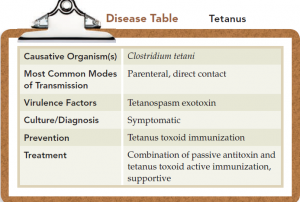