The Cardiovascular and Lymphatic Systems and Their Defenses

The cardiovascular system is the pipeline of the body. It is composed of the blood vessels, which carry blood to and from all regions of the body, and the heart, which pumps the blood. This system moves the blood in a closed circuit, and it is therefore known as the circulatory system. The cardiovascular system carbon dioxide and waste products, delivering them to the appropriate organs for removal. A closely related but largely separate system, the lymphatic system is a major source of immune cells and fluids, and it serves as a one-way passage, returning fluid from the tissues to the cardiovascular system. The heart is a fist-size muscular organ. It pumps blood through the body. It is divided into two halves, each of which is divided into an upper and lower chamber.

The upper chambers are called atria (singular, atrium), and the lower are ventricles. The entire organ is encased in a fibrous covering, the pericardium, which is an occasional site of infection. The actual wall of the heart has three layers: from outer to inner, they are the epicardium, the myocardium, and the endocardium. The valves of the heart are covered by endocardium and it is a common target of microbial infection. The atria receive blood coming from the body. This blood, which is low in oxygen and high in carbon dioxide, enters the right atrium and passes through to the right ventricle. From there it is pumped to the pulmonary arteries in the lung, where it becomes oxygenated and reenters the heart through the left atrium.

Finally, the blood moves into the left ventricle and is pumped into the aorta and the rest of the body. The movement of blood into and out of the chambers of the heart is controlled by valves. The blood vessels contain arteries, veins, and capillaries. Arteries carry oxygenated blood away from the heart under high pressure. They branch into smaller vessels called arterioles. Veins actually begin as smaller venules and merge into veins. The smallest blood vessels, the capillaries, connect arterioles to venules.

Walls of arteries and veins are made of three layers of tissue. The innermost layer is called the endothelium, it is composed of a smooth epithelium. Cells and platelets flow smoothly through the system. The next layer is composed of connective tissue and muscle fibres. The outside layer is a thin layer of connective tissue. Capillaries, the smallest vessels, have walls made of only one layer of endothelium.

In short, the lymphatic system consists mainly of the lymph vessels, which roughly parallel the blood vessels; lymph nodes, which cluster at body sites such as the groin, neck, armpit, and intestines; and the spleen. It is involved in collecting fluid that has left the blood vessels and entered tissues. Filter it of impurities and infectious agents, and return it to the blood.

Defences of the Cardiovascular and Lymphatic Systems

The cardiovascular system is highly protected from microbial infection. Microbes that successfully invade the system, however, gain access to every part of the body, and every system may potentially be affected. For this reason, bloodstream infections are called systemic infections. Multiple defences against infection reside in the bloodstream. The blood is full of leukocytes, with approximately 5,000 to 10,000 white blood cells per millilitre of blood.

The various types of white blood cells include the lymphocytes, responsible for specific immunity, and the phagocytes, which are so critical to nonspecific as well as specific immune responses. Very few microbes can survive in the blood with so many defensive elements. That said, a handful of infectious agents have nonetheless evolved exquisite mechanisms for avoiding blood-borne defences. Medical conditions involving the blood often have the suffix-emia. 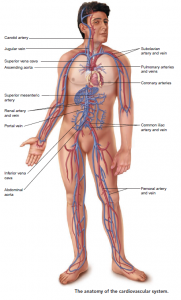