The History of Discovery of Influenzaviruses 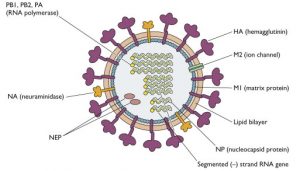 Influenza is known from the Hippocrates era. Further flu-like epidemics were described in Middle Ages. Well-documented are influenza epidemics of 1890 and of 1900. Finally, the global influenza pandemic of 1918-1919 (Spanish flu) caused the death of more than 20 million people.

Viral etiology of influenza was established by W. Smith, C. Andrews, and R. Laidlaw, who isolated influenza type A virus in 1933.

T. Francis and T. Magill isolated influenza type B virus in 1940, and type C influenza virus was discovered by R. Taylor in 1947. Previously circulated pandemic strains were ascertained later as influenza viruses by serological investigations; this conclusion was confirmed nowadays by genetic tests (PCR and others).

Viruses of influenza type A pose the most serious threat for public health. They regularly cause seasonal influenza epidemics repeated in every 2-3 years, but also they can cause severe global pandemics of the disease. Influenza type В virus usually accounts for seasonal influenza outbreaks at time intervals of 3-6 years, and influenza С virus promotes only mild, sporadic forms of diseases. These differences rely upon the virus type A ability to undergo gene reassortment with subsequent change of viral antigenic structure. Thus, in several decades after the previous pandemic, a new subtype of influenza A arises in human circulation, resulting in new pandemic (e.g. H1N1 in 1918; H2N2 in 1957; H3N2 – Hong Kong flu – in 1968). H1N1 strain returned in 1977 (Russian flu).

It was proven that all of pandemic strains are the reassortants between avian and human influenza viruses, except Hong Kong flu virus.

Last global influenza pandemic later called as “swine flu” was declared by WHO in 2009. It originated from a newly emerged pandemic strain of H1N1 virus designated А/2009/Н1N1 (or pdm09 strain). This virus appeared to be quadruple reassortant of primary human, avian, and pig influenza viruses.

In 1997 the initial case of devastating human infection caused by avian influenza A virus (H5N1, avian flu) has been registered in Hong Kong. Since that time the multiple cases of H5N1 avian flu were observed in Southeast Asia with common fatality rate of more than 50%.

Finally, the first human cases of avian flu engendered by novel highly pathogenic avian virus H7N9 were indicated in China in 2013. The lethality of epidemic outbreaks of this disease exceeded 25%.