The oxidation of glucose yields a comparatively small amount of energy and gives off pyruvic acid. Pyruvic acid is still energy-rich, containing a number of extractable hydrogens and electrons to power ATP synthesis, but this can be achieved only through the work of the second and third phases of respiration, in which pyruvic acid’s hydrogens are transferred to oxygen, producing CO2 and H2O. In the following section, we examine the next phase of this process, which takes place in the cytoplasm of bacteria and in the mitochondrial matrix in eukaryotes. To connect the glycolysis pathway to the Krebs cycle, for either aerobic or anaerobic respiration, the pyruvic acid is first converted to a starting compound for that cycle. This step involves the first oxidation-reduction reaction of this phase of respiration, and it also releases the first carbon dioxide molecule. It involves a cluster of enzymes and coenzyme A that participate in the dehydrogenation (oxidation) of pyruvic acid, the reduction of NAD to NADH, and the decarboxylation of pyruvic acid to a 2-carbon acetyl group. The acetyl group remains attached to coenzyme A, forming acetyl coenzyme A (acetyl CoA) that feeds into the Krebs cycle. The NADH formed during this reaction will be shuttled into electron transport and used to generate ATP via oxidative phosphorylation.

Steps in the Krebs Cycle

The Krebs cycle has eight steps, beginning with citric acid formation and ending with oxaloacetic acid. As we take a single spin around the Krebs cycle, it will be helpful to keep track of 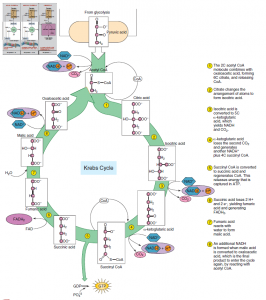 The Krebs cycle serves to transfer the energy stored in acetyl CoA to NAD+ and FAD by reducing them (transferring hydrogen ions to them). Thus, the main products of the Krebs cycle are these reduced molecules (as well as 2 ATPs for each glucose molecule). The reduced coenzymes NADH and FADH2 are vital to the energy production that will occur in electron transport. Along the way the 2-carbon acetyl CoA joins with a 4-carbon compound, oxaloacetic acid, and then participates in seven additional chemical transformations while “spinning off” the NADH and FADH2. That’s why we called the Krebs cycle the “carbon and energy wheel” in a preceding heading.