▶The operon : Jacob and Monod proposed the operon model in 1961 for the co-ordinate regulation of transcription of genes involved in specific metabolic pathways. The operon is a unit of gene expression and regulation which typically includes:

▶The lactose Operon:  Escherichia coli can use lactose as a source of carbon. The enzymes required for the use of lactose as a carbon source are only synthesized when lactose is available as the sole carbon source. The lactose operon (or lac operon) consists of three structural genes: lacZ, which codes for β-galactosidase, an enzyme responsible for hydrolysis of lactose to galactose and glucose; lacY, which encodes a galactoside permease which is responsible for lactose transport across the bacterial cell wall; and lacA, which encodes a thiogalactoside transacetylase.

The three structural genes are encoded in a single transcription unit, lacZYA, which has a single promoter, Plac. This organization means that the three lactose operon structural proteins are expressed together as a polycistronic mRNA containing more than one coding region under the same regulatory control. The lacZYA transcription unit contains an operator site Olac which is positioned between bases –5 and +21 at the 5′-end of the Plac  promoter region. This site binds a protein called the lac repressor which is a potent inhibitor of transcription when it is bound to the operator. The lac repressor is encoded by a separate regulatory gene lacI which is also a part of the lactose operon; lacI is situated just upstream from Plac.

▶The lac repressor: The lacI gene encodes the lac repressor, which is active as a tetramer of identical subunits. It has a very strong affinity for the lac operator-binding site, Olac, and also has a generally high affinity for DNA. The lac operator site consists of 28 bp which is palindromic. A palindrome has the same DNA sequence when one strand is read left to right in a 5′ to 3′  direction and the complementary strand is read right to left in a 5′  to 3′ direction. This inverted repeat symmetry of the operator matches the inherent symmetry of the lac repressor which is made up of four identical subunits. In the absence of lactose, the repressor occupies the operator-binding site. It seems that both the lac repressor and the RNA polymerase can bind simultaneously to the lac promoter and operator sites. The lac repressor actually increases the binding of the polymerase to the lac promoter by two orders of magnitude. This means that when lac repressor is bound to the Olac operator DNA sequence, polymerase is also likely to be bound to the adjacent Plac promoter sequence.

▶Induction: In the absence of an inducer, the lac repressor blocks all but a very low level of transcription of lacZYA. When lactose is added to cells, the low basal levelof the permease allows its uptake, and β-galactosidase catalyzes the conversion of some lactose to allolactose.

Allolactose acts as an inducer and binds to the lac repressor. This causes a change in the conformation of the repressor tetramer, reducing its affinity for the lac operator. The removal of the lac repressor from the operator site allows the polymerase (which is already sited at the adjacent promoter) to rapidly begin transcription of the lacZYA genes. Thus, the addition of lactose, or a synthetic inducer such as isopropyl-β-D-thiogalactopyranoside (IPTG) , very rapidly stimulates transcription of the lactose operon structural genes. The subsequent removal of the inducer leads to an almost immediate inhibition of this induced transcription, since the free lac repressor rapidly re-occupies the operator site and the lacZYA RNA transcript is extremely unstable. 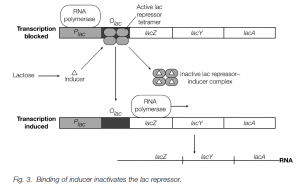 When glucose is present, E. coli does not require alternative carbon sources such as lactose. Therefore, catabolic operons, such as the lactose operon, are not normally activated. This regulation is mediated byCRP which exists as a dimer which cannot bind to DNA on its own, nor regulate transcription. Glucose reduces the level of cAMP in the cell. When glucose is absent, the levels of cAMP in E. coli increase and CRP binds to cAMP. The CRP–cAMP complex binds to the lactose operon promoter Plac just upstream from the site for RNA polymerase. CRP binding induces a 90° bend in DNA, and this is believed to enhance RNA polymerase binding to the promoter, enhancing transcription by 50-fold. The CRP-binding site is an inverted repeat and may be adjacent to the promoter (as in the lactose operon), may lie within the promoter itself, or may be much further upstream from the promoter. Differences in the CRP-binding sites of the promoters of different catabolic operons may mediate different levels of response of these operons to cAMP in vivo.