The Nervous System and Its Defenses

The nervous system performs three important functions—sensory, integrative, and motor. The sensory function is fulfilled by sensory receptors at the ends of peripheral nerves. They generate nerve impulses that are transmitted to the central nervous system. There, the impulses are translated, or integrated, into sensation or thought, which in turn drives the motor function. The motor function necessarily involves structures outside of the nervous system, such as muscles and glands. The brain and the spinal cord are dense structures made up of cells called neurons.

The subarachnoid space is filled with a clear serum like fluid called cerebrospinal fluid (CSF). The CSF provides nutrition to the CNS, while also providing a liquid cushion for the sensitive brain and spinal cord. The meninges are a common site of infection, and microorganisms can often be found in the CSF when meningeal infection (meningitis) occurs. The PNS consists of cranial and spinal nerves. Nerves, or neurons, are bundles of cellular fibers in the form of axons and dendrites that receive and transmit nerve signals.

The axons and dendrites of adjacent neurons communicate with each other over a very small space, called a synapse. Chemicals called neurotransmitters are released from one cell and act on the next cell in the synapse. The defenses of the nervous system are mainly structural. The bony casings of the brain and spinal cord protect them from traumatic injury. The cushion of surrounding CSF also serves a protective function. The entire nervous system is served by the vascular system, but the interface between the blood vessels serving the brain and the brain itself is different from that of other areas of the body and provides a third structural protection. The cells that make up the walls of the blood vessels allow very few molecules to pass through. In other parts of the body, there is freer passage of ions, sugars, and other metabolites through the walls of blood vessels. The restricted permeability of blood vessels in the brain is called the blood-brain barrier, and it prohibits most microorganisms from passing into the central nervous system.

The drawback of this phenomenon is that drugs and antibiotics are difficult to introduce into the CNS when needed. The CNS is considered an “immunologically privileged” site. These sites are able to mount only a partial, or at least a different, immune response when exposed to immunologic challenge. The functions of the CNS are so vital for the life of an organism that even temporary damage that could potentially result from “normal” immune responses would be very detrimental. The uterus and parts of the eye are other immunologically privileged sites.

Cells in the CNS express lower levels of MHC antigens. Complement proteins are also in much lower quantities in the CNS. Researchers now think that MHC markers and complement proteins play a role in the development, regulation and repair of neurons and nervous tissues, through their signaling mechanisms. They speculate that malfunctions with, or absence of these molecules in, the CNS may be responsible for a variety of conditions such as schizophrenia or autism. Other specialized cells in the central nervous system perform defensive functions.

Microglia are a type of cell having phagocytic capabilities, and brain macrophages also exist in the CNS, although the activity of both of these types of cells is thought to be reduced when compared with phagocytic cells elsewhere in the body. 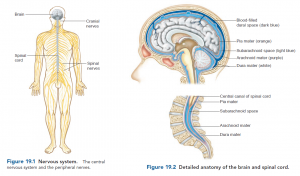