▶The tryptophan operon: The trp operon encodes five structural genes whose activity is required for tryptophan synthesis. The operon encodes a single transcription unit which produces a 7 kb transcript which is synthesized downstream from the trp promoter and trp operator sites Ptrp and Otrp. Like many of the operons involved in amino acid biosynthesis, the trp operon has evolved systems for coordinated expression of these genes when the product of the biosynthetic pathway, tryptophan, is in short supply in the cell. As with the lac operon, the RNA product of this transcription unit is very unstable, enabling bacteria to respond rapidly to changing needs for tryptophan.

▶The trp repressor: A gene product of the separate trpR operon, the trp repressor, specifically interacts with the operator site of the trp operon. The symmetrical operator sequence, which forms the trp repressor binding site, overlaps with the trp promoter sequencebetween bases –21 and +3. The core binding site is a palindrome of 18 bp. The trp repressor binds tryptophan and can only bind to the operator when it is complexed with tryptophan. The repressor is a dimer of two subunits which have structural similarity to the CRP protein and lac repressor. The repressor dimer has a structure with a central core and two flexible DNA-reading heads each formed from the carboxy-terminal half of one subunit. Only when tryptophan is bound to the repressor are the reading heads the correct distance apart, and the side chains in the correct conformation, to interact with successive major grooves of the DNA at the trp operator sequence. Tryptophan, the end-product of the enzymes encoded by the trp operon, therefore acts as a co-repressor and inhibits its own synthesis through end-product inhibition. The repressor reduces transcription initiation by around 70-fold. This is a much smaller transcriptional effect than that mediated by the binding of the lac repressor.

▶The attenuator: At first, it was thought that the repressor was responsible for all of the transcriptional regulation of the trp operon. However, it was observed that the deletion of a sequence between the operator and the trpE gene coding region resulted in an increase in both the basal and the activated (derepressed) levels of transcription. This site is termed the attenuator and it lies towards the end of the transcribed leader sequence of 162 nt that precedes the trpE initiator codon. The attenuator is a rho-independent terminator site which has a short GC-rich palindrome followed by eight successive U residues. If this sequence is able to form a hairpin structure in the RNA transcript, then it acts as a highly efficient transcription terminator and only a 140 bp transcript is synthesized.

▶Leader RNA structure: The leader sequence of the trp operon RNA contains four regions of complementary sequence which can form different base-paired RNA structures. These are termed sequences 1, 2, 3 and 4. The attenuator hairpin is the product of the base pairing of sequences 3 and 4 (3:4 structure). Sequences 1 and 2 are also complementary and can form a second 1:2 hairpin. However, sequence 2 is also complementary to sequence 3. If sequences 2 and 3 form a 2:3 hairpin structure, the 3:4 attenuator hairpin cannot be formed and transcription termination will not occur. Under normal conditions, the formation of the 1:2 and 3:4 hairpins is energetically favorable. 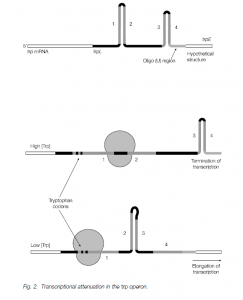 ▶Attenuation: Attenuation depends on the fact that transcription and translation are tightly coupled in E. coli; translation can occur as an mRNA is being transcribed. The 3′-end of the trp leader peptide coding sequence overlaps complementary sequence 1 ; the two trp codons are within sequence 1 and the stop codon is between sequences 1 and 2. The availability of tryptophan (the ultimate product of the enzymes synthesized by the trp operon) is sensed through its being required in translation, and determines whether or not the terminator (3:4) hairpin forms in the mRNA.

As transcription of the trp operon proceeds, the RNA polymerase pauses at the end of sequence 2 until a ribosome begins to translate the leader peptide. Under conditions of high tryptophan availability, the ribosome rapidly incorporates tryptophan at the two trp codons and thus translates to the end of the leader message. The ribosome is then occluding sequence 2 and, as the RNA polymerase reaches the terminator sequence, the 3:4 hairpin can form, and transcription may be terminated . This is the process of attenuation. Alternatively, if tryptophan is in scarce supply, it will not be available as an aminoacyl tRNA for translation, and the ribosome will tend to pause at the two trp codons, occluding sequence 1.

This leaves sequence 2 free to form a hairpin with sequence 3 , known as the anti-terminator. The terminator (3:4) hairpin cannot form, and transcription continues into trpE and beyond. Thus the level of the end product, tryptophan, determines the probability that transcription will terminate early (attenuation), rather than proceeding through the whole operon.

▶Importance of attenuation: The presence of tryptophan gives rise to a 10-fold repression of trp operon transcription through the process of attenuation alone. Combined with control by the trp repressor (70-fold), this means that tryptophan levels exert a 700-fold regulatory effect on expression from the trp operon. Attenuation occurs in at least six operons that encode enzymes concerned with amino acid biosynthesis.

For example, the His operon has a leader which encodes a peptide with seven successive histidine codons. Not all of these other operons have the same combination of regulatory controls that are found in the trp operon. The His operon has no repressor–operator regulation, and attenuation forms the only mechanism of feedback control.