The transfer of genetic material from one cell to another by a bacteriophage is called transduction. Bacterial genes may be transferred from strain to strain using bacteriophages as vectors. This genetic transfer technique was discovered by Norman Zinder and Joshua Lederberg (1952) while searching for sexual conjugation in Salmonella species. They mixed auxotrophic mutants together and isolated prototrophic recombinant colonies from selective nutritional media by using Davis U-tube experiment. Auxotrophic strains were added in each arm of U-tube and separated by a microporous sintered glass filter. The prototrophs were found in one arm of the tube that indicated some phenomenon other than conjugation was involved. It was subsequently observed that the active component was a bacteriophage which was carried by one of the strains in the prophage condition.

Some bacterial cells have the ability to carry phage DNA within their own DNA and such cells are called as lysogenic bacteria. In such bacteria, the prophage, under certain conditions multiplies and destroys the host cell with the release of a number of phage particles. These phages can infect other bacteria and carry the bacterial DNA to the recipient cells. Such phages are called as ‘transducing phages’. These are two fundamentally different transduction processes such as generalized (unrestricted) transduction and specialized (restricted) transduction.

Transduction mediated by virulent phages is called generalized transduction because it transfers any portion of the bacterial chromosome from one cell to another. Virulent phages infect bacteria by adhering to the surface of the host cell and inject the DNA into it. The phage DNA directs the cell to make phage components as DNA and protein. These phage components assemble into mature phage particles that are released from the cell after cell lysis. These particles may subsequently infect other susceptible cells, completing the lytic cycle . 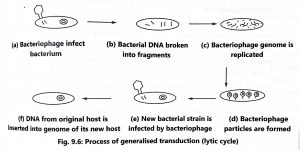 Some temperate phages can transfer only a few restricted genes of the bacterial chromosome to the receipient bacterial cell. This transfer of bacterial genes adjacent to prophage only to the recipient chromosome is called specialized transduction.

Morse and Lederberg (1956) found that in the lambda (A) phage the transducing activity was restricted to the galactose locus. Temperate phages have two types of life cycles such as lytic cycle and lysogenic cycle. When a phage genome is introduced in the bacterial cell,it becomes integrated with bacterial chromosome as prophage. The prophage behaves like a segment of the host chromosome and replicates synchronously in bacterial cell. This is called lysogeny. Under certain conditions (e.g. UV light or chemicals), the prophages enter the lytic cycle and kill the hosts.