While the Bacteria lack the sophisticated systems of sexual reproduction found in eukaryotes, they do not rely on mutation alone to generate diversity within their populations. Spontaneous mutagenesis alone is insufficient to respond to the varying environments that the majority of Bacterial species encounter. Bacteria can acquire variation in genes, complete new genes or even complete biosynthetic pathways via the acquisition of plasmids, infection by bacteriophages or transposons, and by direct, nonsexual interchange of genetic information.

The phenomenon of Bacterial transfer of genetic information has long been studied in the context of same-species or vertical gene transfer. However, it has become increasingly apparent that transfer occurs between species too. Horizontal gene transfer can account for the rapid spread of antibiotic resistance in a variety of hospital-acquired infections, but also can be used to our advantage in the generation of consortia for the biodegradation of xenobiotics. In a mixed population, such as that found in a hospital or bioreactor, it is hard to pinpoint the exact mechanisms used to acquire DNA, but looking in the genomes of isolated organisms it can be easy to pinpoint the genomic regions that originated in other organisms by their unusual codon usage or other sequence signatures.

The best understood mechanism of gene transfer is conjugation, a method that gave the first genetic map of Escherichia coli. This is a plasmid-mediated effect, in contrast to transduction in which DNA moves from the donor to the recipient strains by means of a Bacterial virus or bacteriophage. The method used most commonly to introduce foreign genes into laboratory strains of Bacteria is transformation, a poorly understood process relying on a shock response to take up plasmids or other fragments of DNA.

Some strains of E. coli possess a plasmid (the F’ factor), which allows them to transfer DNA to a recipient of the same species. The transfer of DNA is unidirectional from the donor carrying the F’ factor (the strain designated F+) to a recipient (F–) that does not have the plasmid . The copying of the F’ factor plasmid is accompanied by a physical joining of donor and recipient via a plasmid-encoded structure, the F-pilus. After conjugation is complete the recipient becomes F+. Conjugation was first described in 1946 by Lederberg and Tatum, who noted that two Bacterial auxotrophs could be mixed together to make a new non auxotrophic strain. They noted that the transfer of information could be stopped easily by shaking the cells, even though the shaking process did not kill the cells outright. Others separated the donor and recipient by a fine filter and demonstrated that physical contact between the cells was an absolute requirement for conjugation. The process was not fully understood until it became apparent that the strains that could act as donors (high frequency recombination or Hfr strains) all possessed the large F’ plasmid. It was also shown that F’ could integrate into the genome of the Hfr strains. During the procedure, parts of the donor’s chromosome may be copied and transferred as well, although rarely the entire complement . If the acquisition of the donor’s DNA causes the recipient to change its phenotype after recombination, the recipient is said to be a transconjugant.

Although conjugation and transduction provide simple ways to introduce genes into microorganisms, both are time-consuming processes. The most commonly used way of introducing DNA into Bacteria in today’s laboratory is via transformation. Most routine molecular biology experiments result in the generation of plasmids, in the form of DNA libraries, cloning experiments, or preparation of DNA constructs for other experiments.

The technique of transformation is well defined, but the mechanism is poorly understood. In E. coli, in order to make the cells available for manipulation, plasmid-free cells are grown to mid log phase, and then washed in a cold magnesium chloride solution to remove traces of growth medium. A high concentration of washed cells is suspended in cold calcium chloride. At this stage the cells are competent, a state mimicking a physiological state in which the Bacteria are able to take up DNA from their environment. It is thought that this is a starvation response and perhaps the influx of external DNA may provide an extra gene that might help the cell survive. In the laboratory, the plasmid to be transformed is added to the competent cells. The plasmid remains in solution until the cold cells are suddenly heat shocked by raising the temperature to 42°C. Only a small percentage of the cells take up plasmid DNA as a result of the heat shock, and all the cells are in a weakened state. A rich recovery medium is added, and then the cells are plated out on a selective medium after incubation. The cells that have successfully taken up the plasmid are known as transformants. Not all Bacteria can be transformed in the laboratory, but a similar protocol is used to generate Bacillus subtilis transformants, although they can only take up linear DNA and must maintain the acquired gene by recombination into their chromosomes. However, the way in which either plasmid DNA in E. coli or linear DNA in B. subtilis crosses the cell membrane intact, or in what form it does so, is currently the subject of speculation. 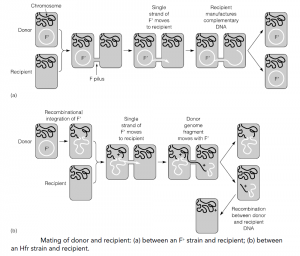 DNA transfer can occur between cells by the action of bacteriophages. Occasionally, the excision of a lysogenic phage’s genome from the host chromosome is imperfect. Instead of just phage genes, the excision includes one or two host genes from locations adjacent to the site of phage recombination. When the altered phage infects another cell, it is possible that the extra genes will complement mutated genes in the second host’s genome. This process is known as specialized transduction. In contrast generalized transduction can lead to the transfer of any gene in a host genome, not just those adjacent to a site of lysogeny.

An example of a generalized transducing phage is the bacteriophage P1 of E. coli. Using this phage to transfer DNA between E. coli strains is a relatively quick and easy way of making chromosomal mutations, and is sometimes abbreviated to P1 transduction. The difference occurs just as the prophage leaves the host genome on the induction of the lytic cycle. The phage genome leaves completely and induces the degradation of the host chromosomes. The phage replicates inside the cell, but during this process some random Bacterial DNA is packaged as if it were phage DNA.

When the donor cell is lysed, the P1 phage released can be used to infect a recipient. If the donor was a wild-type cell and the recipient was, for example, an auxotroph for histidine, some of the P1 phage may carry the DNA to correct the mutation. A small number of infected recipients will receive a fragment of wild-type donor DNA instead of phage P1 DNA and this can recombine with a recipient chromosome. While a useful technique in E. coli, where P1 phage has been engineered to increase the frequency of generalized transduction, few similar systems exist. The number of genes that can be transferred is limited to the maximum amount of DNA that can be packaged into a P1 phage head.