For many centuries it was observed that individuals surviving the common and often fatal disease smallpox were subsequently protected from reinfection with the disease. Indeed smallpox was so feared that the practice of deliberate infection with a view to providing such protection became widespread. The procedure (named variolation from variola major, the smallpox virus) applied pus from a lesion (pock) of an individual infected with what appeared to be a nonlethal strain of the virus onto a scratch in the skin. Variolation was itself often fatal if the virulence of the original infection was misjudged, and was succeeded in the late 18th century following the early experiments of Edward Jenner (and others) with cowpox. Jenner himself was the victim of near-fatal variolation as a boy; as a result he and his contemporaries pioneered a less dangerous procedure based on their observations that milkmaids who contracted the milder disease of cowpox, did not succumb to smallpox.

Jenner introduced the cowpox virus (which gives mild, acute infections in humans) into some small boys whom he later challenged with virulent smallpox virus. Fortunately, Jenner’s theory was correct and the boys were protected against the disease. The success of this procedure (named vaccination from the Latin vacca (cow) as a tribute to Jenner’s work) was due to the fact that cowpox virus shares a number of antigens with smallpox virus but does not cause severe disease in humans. Cowpox replication had induced an immune response which, upon subsequent challenge with smallpox, was sufficient to prevent the closely related smallpox virus undergoing any significant infection. A hybrid cowpox virus of unknown origin, vaccinia virus (variola minor), was used by the World Health Organization (WHO) in a vaccination program that in 1977 succeeded in eradicating smallpox from the world.

The WHO has an ambitious vaccination program that seeks to deliver vaccines to most children of the world and to eradicate many viruses in the near future. Since the launching of the polio vaccination program in 1998, the WHO has reported that the number of cases has fallen by 99% and the disease is now endemic in only four countries (WHO, 2008). The majority of vaccines in clinical use today are of two types, live (attenuated) or inactivated (killed) vaccines. More recent subunit vaccines contain selected virus proteins and many are being developed, along with several experimental DNA vaccines. Vaccines are administered by a number of routes – intramuscular, intradermal, subcutaneous, intranasal or oral.

It is generally accepted that live vaccines are the preferred vaccines and examples are shown in Table . Initially these vaccines were derived by the continued passage of the virulent wild-type (natural) virus in cultured cells and selecting for avirulent viruses that would replicate in vivo but not cause disease. The replication of avirulent virus triggers the immune system, which not only eliminates this virus from the host but also establishes immune memory that serves to resist the virulent wild-type virus. A vaccine created in this way during the 1950s, the Sabin poliovirus vaccine, is still in use today. Attenuation is the result of genetic mutation and of course viruses can therefore mutate again in such a way that they revert back to the wild-type genotype and phenotype (i.e. revert back to full virulence). Recent experiments have shown that, for poliovirus type 3, reversion to a virulent form involves only two amino acid changes. The problem of reversion has meant that this rather empirical approach of virus attenuation has now been replaced by defined genetic manipulation of viruses either deleting or mutating individual genes. The risk of reversion with these vaccines is minimal.

Live vaccines have distinct advantages over killed. They require only small amounts of input virus (which must replicate), they can induce local immunity (i.e. mucosal antibody), they may be given by the natural route of infection (for example, the Sabin vaccine is given orally), and they are usually less expensive. Drawbacks to their use include the problem of reversion to virulence as described above, a loss of effectiveness if not kept live (usually requiring refrigeration or freeze-drying), and poor effectiveness in individuals with other infections – for example, infections of the gut inhibit replication of the poliovirus vaccine. Additionally, contamination with other adventitious agents can cause serious problems and live vaccines are of course limited to use in only immunocompetent individuals. 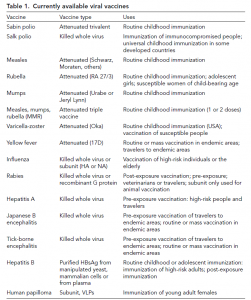 In addition to the Sabin attenuated poliovirus vaccine, an inactivated vaccine (the Salk vaccine) pioneered at the same time is still used in many countries today. Inactivation of the Salk vaccine typifies the approach to producing killed vaccines. High titers of wild-type virus are grown in cell culture and inactivated by the use of chemicals such as β-propiolactone or formaldehyde. The Salk vaccine is administered subcutaneously or intradermally to stimulate an immune response. With no subsequent virus replication (as seen with live vaccines) the immune response follows that of a primary response to an inert antigen but the necessary high levels of antibody are therefore stimulated only by multiple injections.

Killed vaccines have the advantage that they show no reversion to virulence, and are also stable and easy to store, often not requiring refrigeration. They can be administered to immune-suppressed patients and are usually not affected by interference from other pathogens, which is important in many developed countries. Killed vaccines, however, can be expensive and difficult to inactivate (no single infectious particle can remain in the preparation) and considered dangerous to manufacture (before inactivation). They do not stimulate the full scope of the immune system and require multiple (booster) doses. The recently derived hepatitis A vaccine is an inactivated vaccine, primarily produced because it was technically impossible to develop an attenuated hepatitis A virus capable of replication within the liver without disease. It is considered that the use of killed vaccines alone, which often allow some wild-type virus replication at local sites (e.g. poliovirus), will not be sufficient to totally eradicate viruses from the world.

Attempts to design and produce subunit vaccines have been prompted by a number of factors. Many viruses do not replicate easily – or at all – in cell culture, while others are considered to be too dangerous for use as live or killed vaccines, HIV being a prime example. There is also a risk that some vaccines may become latent in the body and subsequently reactivate (e.g. HSV) and of course some may simply be poorly effective or have unacceptable side effects (e.g. influenza virus vaccines).

The basis of the approach is to develop a vaccine product that represents an incomplete composite of viral antigens that, when injected into the host, will induce protective immunity against the virulent virus. The proteins of choice for such a vaccine are usually capsid or envelope proteins; often the protein that binds to the cell receptor such as gp120 of HIV or hemagglutinin (HA) of influenza. These proteins can be extracted from the virion by chemical treatment (influenza HA), concentrated from the plasma of infected patients and inactivated (hepatitis B surface antigen, HBsAg), engineered by recombinant DNA technology (HBsAg) or synthesized as a peptide such as the experimental peptide vaccine for foot and mouth disease virus, comprising part of the VP1 capsid protein of the virion.

These vaccines may suffer from some of the drawbacks of inactivated whole virus vaccines in that they do not replicate in the host. This limits their efficacy of immune stimulation and there is much research directed to the improved presentation and immunogenicity of virus subunit vaccines. Antigens may be injected with adjuvants, immune-stimulating agents such as aluminium oxide or the cholera toxin B subunit protein. Another approach is to conjugate the vaccine as a chimeric protein linked to host cytokines or even antibodies that enhance the immune response. Another approach under study at present is to introduce the selected viral gene into a virus vector such as the vaccinia virus. Immunization of the host with the replicating recombinant virus expresses a range of antigens including the protein encoded by the cloned gene. The goal is the stimulation of immunity to both the viral vector and the virus represented by the cloned gene. No such vaccine is licensed for human use, but a recombinant vaccinia virus expressing the rabies virus G protein is used for veterinary purposes.

Few subunit vaccines are in general use at present. The HBsAg induces strong protective immune responses and for many years was prepared by purifying the protein from the serum of infected individuals. The risk of infection with this preparation is now eliminated as the current vaccine involves purification of the protein from genetically engineered yeast cell cultures. The vaccine is used routinely to induce protection against HBV in members of the medical and scientific professions. A recently approved subunit vaccine (Gardasil, manufactured by Merck) is formed by the assembly of the two HPV structural proteins, L1 and L2, into capsid-like structures (known as virus-like particles, VLPs). The proteins are expressed in isolation, meaning that the VLPs contain no genome and hence are not infectious. Gardasil combines proteins from four strains of HPV, providing a broad protection vaccine that is aimed at young women to immunize against infection with high-risk HPV-6, -11, -16, and -18, which are strongly associated with cervical cancers.

This is an innovative approach to vaccination that has grown out of the concept of gene therapy; the expression of novel proteins within a host, from extraneous gene sequences. DNA sequences encoding antigenic portions of viruses (protective antigens) are inserted into a plasmid , which can be injected into the host as naked DNA free of protein or nucleoprotein complexes. The host cells can take up the DNA and may express the virally encoded proteins through their own transcription and translation procedures. Such vaccines theoretically stimulate strong cytotoxic T-cell responses as DNA derived from bacteria (i.e. the plasmid itself ) promotes helper T-cell cytokine production. Experimental influenza vaccines in animals have proved effective in challenge experiments and clinical trials are underway with DNA vaccines for HIV, but as yet these are some way from approved clinical use.