The host response to viral infection involves the immune system; a range of lymphocytes and soluble proteins that act to curtail virus replication, destroy infected cells, and block infection of new cells. The presence of virus proteins (antigens) stimulates non specific responses such as the action of phagocytic and lytic cells that attack infected host cells. Viral antigens also react specifically with lymphocytes such as B cells and T cells that respond to provide lytic cells and antibodies directed in a precise manner targeting the virus in question. A successful immune response eliminates virus and infected cells from the host and establishes a ‘memory’ of the virus to promote rapid response in the face of a future infection by the same (or a closely related) virus.

Viral proteins, both structural and nonstructural, are foreign to the host and many induce the activity of immune cells. The ability to stimulate an immune response is referred to as antigenicity or immunogenicity and the stimulating molecule (the antigen or immunogen) is usually a protein, although carbohydrates and lipids can also act as antigens. The smallest part of an antigen is referred to as an epitope. For many viruses the structural proteins are highly immunogenic and the main triggers of the immune response, particularly envelope proteins that are inserted into the plasma membrane of infected cells. Antigen recognition is the trigger for activation of immune lymphocytes and is determined by binding of the unique molecular structure of the antigen with a protein receptor in the plasma membrane of lymphocytes.

The immune system has two types of effectors; those of the innate response, which act early during infection in a general, nonspecific manner, and the cells of the adaptive response, which are activated a few days later and react specifically with the stimulating antigen. The innate immune system responds first in combating virus infections and comprises lytic (natural killer, NK) cells and phagocytic cells that are found either within the blood (polymorphonuclear leukocytes, PMNLs) or that can trawl the tissues (macrophages).

NK cells have an important role in the control of some virus infections. In addition, infected cells themselves can respond to virus by the synthesis of interferon, a secreted protein that can induce an antiviral state in other, as yet uninfected cells, protecting them from viral invasion. Interferon proteins can also enhance the activity of immune lymphocytes. The adaptive response requires several days to activate and consists of the T lymphocytes and, a few days later, the B lymphocytes.

Before activation, the numbers of these cells are low but recognition of viral antigens stimulates expansion of activated cell lines that give rise to either undifferentiated memory cells or differentiated effectors. T lymphocytes recognize viral antigens (via the T-cell receptor, TCR) that have been processed and exposed on the surface of cells in conjunction with host major histocompatibility complex (MHC) proteins.

These lymphocytes are crucial for the action of both CTLs and B lymphocytes through the production of cytokines, soluble proteins that enhance or suppress immune cell functions. B cells similarly recognize viral antigens via a cell surface receptor (the B-cell receptor, BCR) and differentiated lymphocytes (plasma cells) synthesize antibody that binds with the same specificity (i.e. to the stimulating antigen).

Antibodies may bind with antigen present on free virions or on infected cell surfaces. The binding of antibody to free virus can neutralize its infectivity by blocking virus attachment, penetration or uncoating. Binding of antibody to infected cells triggers the action of the Complement cascade, a series of nine soluble proteins that assemble into a pore structure (the membrane attack complex) that leads to infected cell lysis. The presence of antigen-bound antibody or Complement molecules on the surface of an infected cell can also recruit phagocytic cells (a process known as opsonization) to engulf the cell.

For acute infections, initial (primary) T-cell responses usually peak between 7 and 10 days post infection and decline within 3 weeks. The primary antibody response usually peaks later and is often barely detectable during the acute stage of infection but serum antibody levels increase dramatically 2–3 weeks post infection and may linger for several months. Primary antigen recognition and immune responses usually result in the formation of memory B and T cells that persist, making antigenic recognition much faster during reinfection. This secondary response is virtually immediate in terms of CTL and antibody response and often at a higher level. The mechanisms that combat viral infections are outlined in Table. 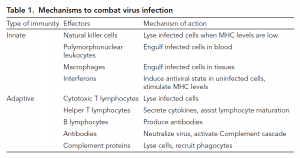 The immune response mounted against an invading virus may itself be responsible for the damage and disease state that follow infection. This is the case for the majority of the common cold symptoms seen with rhinovirus infections and the skin rash that is associated with measles. We have described symptomatic and asymptomatic chronic HBV infections; the major contributor to the symptomatic outcome is immune lysis of infected hepatocytes by CTLs. The recently emerged SARS virus itself causes little cellular damage, but it stimulates a ‘cytokine storm’ in patients, a heightened release of immune proteins that lead to an inappropriate and dangerous immune response.

A Dengue virus has four known serotypes and infection with any single serotype gives rise to a febrile illness with an accompanying rash and joint and muscle pain. However, subsequent infection with a different strain of Dengue virus, especially in children, leads to a much more severe pathology, dengue hemorrhagic shock syndrome (DHSS), thought to be due to the enhanced immune response to the second strain. Viruses may also evoke autoimmunity, probably via molecular mimicry, which is the production of an antigen that shares conserved sequences with a host cell protein. As a result, antibodies or T cells are produced with specificity against the viral antigen but that also react with host proteins.

Viruses and the immunocompromised

Individuals with natural or artificially induced immunosuppression are at risk of more severe clinical disease from a range of viral infections. For example, infants with the genetic disorder severe combined immunodeficiency (SCID) develop recurrent infections early in life (e.g. rotavirus in the gut, which induces prolonged diarrhea). In particular the Herpesviridae (such as HSV, CMV, and VZV), which are responsible for latent infections, show far more frequent reactivation and recurrence and severe recrudescence in immunocompromised individuals.

Immune suppression is induced by medication following transplant surgery and may lead to generalized shingles (recurrence of VZV), CMV pneumonia or genital warts (HPV). Individuals with little or no antibody production (hypogammaglobulinemia) often harbor and excrete viruses for many years (e.g. poliovirus from the gut).

Some viruses induce immunosuppression in various ways, and to various levels. For example, HBV suppresses the induction of interferon in some hosts (which in turn reduces the CTL response), while the measles virus transiently suppresses T-cell responses during replication. Severe immunosuppression results from HIV infection of CD4 T-helper cells and macrophages. The virus persists in the host for months or years, eventually progressing to high levels of replication within CD4 cells, seriously depleting the T-helper cell population. This results in serious immunosuppression (acquired immunodeficiency syndrome, AIDS) and susceptibility to a wide range of pathogens (that normally are readily eliminated by the immunocompetent host), which are usually the cause of death in such patients.

Evasion of the immune system

Many viruses have mechanisms to inhibit, suppress or evade the immune response in order to continue replication and transmission. These include inhibition of antigen processing, suppression of interferon production, inhibition of phagocytes, and reduced immunogenicity, alteration of lymphocyte traffic, effects on cellular modulators, depression of Complement activity, resistance to the immune effectors, and rapidly appearing antigenic variation. Many viruses use several different mechanisms together. Most of the Herpesviridae of course escape the immune system while latent in their host and several have other mechanisms that act during acute replication.

Epstein–Barr virus (EBV) inhibits antigen presentation to immune cells and interferon production through expression of a protein similar to interleukin 10, an inhibitory cytokine. HSV can interfere with NK cell function or even kill these cells and CMV suppresses NK cell lysis by mimicking MHC proteins. Both HSV and EBV structural proteins interfere with the Complement cascade and an HSV structural protein on infected cell surfaces prevents Complement fixation or opsonization by phagocytes.

The Adenoviridae and Poxviridae (such as vaccinia virus) also interfere with antigen presentation by down-regulating the expression of MHC type I protein and are capable of inhibiting the antiviral mechanism of interferon in cells. The high mutation rate of many RNA viruses gives rise to alterations in antigenic molecules such that they are no longer recognized by the circulating immune cells and antibodies.

This is evident during the long-term infection of HIV within a host and is also seen at the population level in the influenza virus. As this virus undergoes constant replication within different hosts across a population, gradual antigenic changes result from mutations, causing antigenic drift. This accounts for the yearly recurrence of influenza across the globe, and the need for new vaccine formulations each year, as the mutations change the viral antigens sufficiently that immunological memory does not recognize them. Occasionally, larger genetic changes occur, known as antigenic shift, where a complete genomic segment is altered as a result of a process known as reassortment.

The influenza A virus that infects humans can also infect pigs and birds, where it may invade cells that also harbor porcine or avian influenza viruses. One or more of the genomic segments from these viruses may be packaged within a virion that otherwise comprises influenza A virus proteins and genomic segments. When these segments encode for the strongly immunogenic proteins such as HA or NA, the resulting new virus may be capable of replication in previously immune hosts, as the immune memory to influenza virus HA and NA molecules cannot recognize the new antigens. On several occasions during history, antigenic shift has led to severe influenza pandemics that have spread devastating illness across the globe.