The flower is actually a modified shoot meant for production of seeds:

It consists of four different circles (whorls) arranged in a definite manner. A flower is built up on stem or pedicel with the enlarged end known as thalamus or receptacle. The four whorls of the flowers can be described as under:

1. Calyx: It is the outermost whorl of flower and is generally green in colour, the individual member of which is called sepal.

2. Corolla: It is the second whorl of flower and is either white or bright coloured, each member of which is known as petal.

3. Androecium: It is the third circle of flower and constitutes the male part. The individual component is called stamen and each stamen consists of filament, anther and connective.

4, Gynoecium: This is the fourth circle of the flower and constitutes the female part. Each component is known as carpel or pistil and is made of stigma, style and ovary. 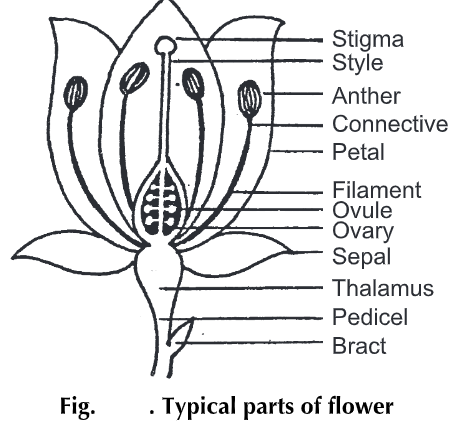 When a flower is divided into two equal parts by any vertical section passing through the centre, then it is described as regular or symmetrical or actinomorphic flower as in ipomoea, rose, datura and shoe-flower. But when it cannot be divided equally into two parts by one vertical section then it is described as irregular or asymmetrical or zygomorphic flower.

Arrangement of floral parts on thalamus:

Depending upon the arrangement of floral parts on thalamus, the flowers may be of three types.

(i) Hypogynous flower (Superior ovary): Herein the thalamus is conical, flat, convex and stamens, sepals and petals are arranged at base and ovary at the apex. Examples: Brinjal, china rose, mustard etc. 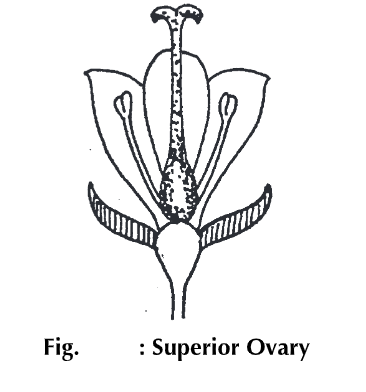 (ii) Perigynous flowers (Half-superior Ovary): Thalamus is flat, sepals and stamens grow around the ovary. The flowers are said to be perigynous as in Rose, Strawberry peach. 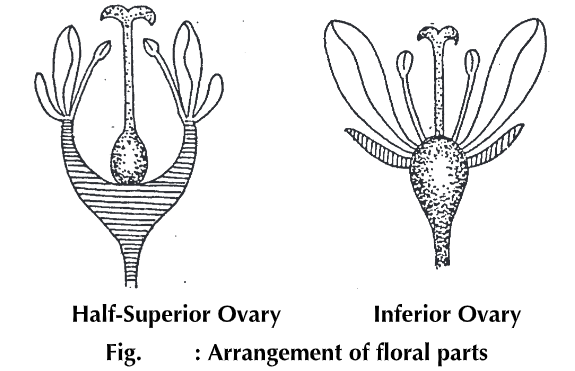 (iii) Epigynous flower (Inferior-ovary): The thalamus is fused with ovary wall, calyx, corolla, stamen appear at the top and the gynaecium at the bottom as in Sunflower, cucumber, apple etc.

The type of distribution of placentae in the ovary is called placentation. They are of the following types:

1. Marginal: It is characteristic to monocarpellary ovary and placentae arise on ventral suture, e.g. bean and pea

2. Axil: It is characteristic to polycarpellary syncarpous, bilocular or multilocular ovary. Ventral sutures of each carpel meet at the centre and each of them have marginal placentation. Examples are Onion, china rose, ipomoea.

3. Parietal: It is characteristic to polycarpellary syncarpous ovary and the placentae develop on the ventral suture but the ovary is unilocular as in papaya and cucurbita.

4. Basal: It is characteristic to polycarpellary and unilocular ovary. Only one ovule is present and it arises from its base as in sunflower.

5. Free Central: It is characteristic to polycarpellary syncarpous ovary which is unilocular. Ovules arise on the central axis but it is not connected with the peripheral wall. Examples are Dianthus, saponaria, portulacca.

Pollination is the process of transference of pollen grains from the anther of a flower to the stigma of the same flower or another flower of the same or allied species.

Pollen grains are produced by bursting the anther and are carried by various agencies to the stigma.

The agencies may be insects of various types, wind or even water.

There are two types of pollination i.e.

1. Homogamy: In this case the anthers and stigmas of a flower mature at the same time.

2. Clestogamy: It is found in flowers which never open or in the underground flowers of commeline bengalensis.

(b) Cross-pollination or Allogamy: Pollination through the agency of insects, animals (such as snails, bats, squirrels, birds and even human beings) wind and water is Cross-Pollination

Pollination by insects is known as entomophily. To attract various insects, plants adapt different means such as colour, nectar and scent.