Leaves are flat, thin green appendages to the stem, containing supporting and conducting strands in their structure. They develop in such a way that older leaves are placed at the base while the younger ones at the apex.

(a) Leaf base or hypopodium by means of which it is attached to the stem.

(b) Petiole: It is the stalk of leaf with which leaf-blade is attached to the stem. It is also known as mesopodium. It may be present in leaf or may be absent in leaf. Leaves with petiole are called petiolate while those without petiole, are called sessile. They may be short or long and cylindrical. Sometimes, it is flattened as in the case of lemon. Then it is described as winged-petiole. In some plants the petiole undergoes modification to form the tendrillar-petiole which help the plant to climb. Example, clematis. In few aquatic plants it enlarges to form the swollen-petiole by enclosing air and thus keep the entire plant floating over the water. In few other cases, the petiole enlarges to such an extent to form the leaflike structure as in Australian-acacia and is known as phyllode.

(c) Lamina or Leaf-blade: The flat expanded part of the leaf is lamina or leaf-blade (Epipodium). Lamina may be thick as in xerophytic leaves or thin as in hydrophytes or intermediate as in mesophytes.

(d) Stipules: These are the two small outgrowths found at the base of the leaf, to protect the axillary bud.

Some stipules perform special functions and hence are put into following types:

2. Foliaceous Stipules: In case of plants with compound leaves some of the leaflets get converted into tendril and the stipules expand to form the flat surface and carry on photosynthesis i.e. Lathyrus or pisum.

3. Bud-stipules: Scaly stipules of the Ficus sp. are characteristic, which protect the terminal vegetative bud. With the development and unfolding of the leaf the bud stipule falls off.

4. Spiny stipules: In some plants, the stipules get converted into spines and help against browsing animals as in the case of Acacia and Zizyphus.

There are five types of stipules which are as under:

1. Free-lateral: These are free and located on either side of the leaf as in China-rose.

2. Adnate: When the stipules unite with the petioles forming winglike structure are known as Adnate stipules, i.e. Groundnut, rose, etc.

3. Inter-petiolar: When stipules are located in between the two petioles of two leaves as in Ixora.

4. Axillary: When two stipules unite becoming axillary to the leaves.

5. Ochreate stipules: These form a hollow tube around the stem as in Polygonum.

Before considering the further anatomical details of the leaves it is very essential to know the basic difference botanically between the leaf and the leaf-let which is as under:

Functions of leaves can be grouped as primary and secondary functions:

(A) Primary functions of leaves are:

(B) Secondary functions performed by leaves are:

1. Storage of food: Such a function is observed in onion bulb wherein leaf bases become fleshy or in case of garlic the cloves are bulky. Aloe is another example.

2. Vegetative propagation: Bryophyllum produce new plants with the buds on their margins.

3. Protection: With the help of spiny stipules as in case of Acacia or Zizyphus.

4. Support: By developing tendrils, stipules, etc. leaves support the growth of the plant in general.

5. Leaves also help in attracting insects by their bright colours.

(a) Shape of the lamina of leaves:

Various shapes of the leaves are due to various types or shapes of lamina. It may be one of the following:

3. Linear: When it is long narrow and flat i.e. Grasses.

5. Lanceolate: Which look like lance or spear-shaped. Examples Nerium, senna.

8. Obcordate: Inversely heart-shaped i.e. base is narrow but apex is broad, Example: Oxalis.

9. Spathulate: Like spatula or spoon-shaped as in calendula and drosera.

10. Cuneate: Wedge-shaped as in Pista.

12. Sagittate: Arrow-shaped such as in Arum.

13. Hastate: When the two lobes of sagittate-leaf are directed outwards as in [pomoea.

15. Auriculate: When the leaf has got ear-like projections at the base.

16. Lyrate: When it is lyre-shaped or the blade is divided into lobes with large marginal lobe, i.e. Raddish, Mustard.

17. Runcinate: With the lobes convex before and straight behind, pointing backward like the teeth of the double saw i.e. Dendelion leaf.

18. Rotund (Orbicular): When the blade is circular or round e.g. lotus.

19. Elliptical or oval: When the leaves are narrow at the base and apex but broad in the middle such as guava, vinca, etc.

20. Peltate: When the lamina is shield-shaped and fixed to the stalk by the center.

21. Falcate: When leaves are sickle-shaped as in Eucalyptus and Astratian acacia.

Leaf margin may be of the following types:

(a) Entire: When it is even and smooth i.e. senna, eucalyptus.

(b) Sinuate or wavy: With slight undulations like Ashok.

(c) Crenate: When the teeth are round as in digitalis.

(e) Serrate: When it is like the teeth of the saw such as Rose, China rose etc.

(f) Ciliated: It is fringed with hairs.

The apex of the leaf may be one of the following kinds:

2. Acute: When it is pointed to form acute angle, but not stiff i.e. Hibiscus.

4. Recurved: When the apex is curved backward.

8. Emarginate: When tip is deeply notched as in Bambinia.

9. Tendrillar: Tip forming a tendril such as Gloriosa – superba.

The lower extremity of the lamina of the leaf may exhibit one of the following shapes:

1. Symmetrical: Equal as in vasaka.

2. Asymmetrical: Unequal as in senna or Datura.

3. Decurrent: As in Digitalis.

It may be of the following types:

1. Glabrous: When surface is smooth and free of hair or any outgrowth i.e. Vasaka, Datura.

2. Rough: When harsh to touch, Digitalis.

3. Hairy: When covered with hairs.

Taking into consideration the nature of the lamina of the leaves, they are classified into two main groups.

1. Simple leaves: A leaf which has only one leaf blade or lamina is called a simple leaf. It may be stipulate or exstipulate, petiolate or sessile, but always possess axillary bud in its axil. It may have an undivided lamina or may be lobed.

2. Compound leaves: A compound leaf consists of more than one lead blade or the lamina, the compound leaf is divided into several segments called leaflets or pinnae. Examples are Senna, Tamarind, Acacia.

(a) Pinnate compound leaves: These are sub-clasified as under depending upon the number of rachis:

An axis bearing the leaflets in pinnate compound leaf is known as rachis ( pl: rachii).

1. Unipinnate Compound leaves: Wherein only one rachis bearing the leaflets is present. When an even number of leaflets are present it is known as paripinnate i.e., Tamarind, Gul mohor if the number of leaflet is odd it is described as imparipinnate: rose, margosa.

3. Tripinnate Compound leaves: These contain primary, secondary and even tertiary rachis. Tertiary rachii only bear the leaflets as in Moringa, oroxylon.

(a) Palmate Compound Leaves: In this type the leaflets are born by the petiole of the leaf.

Depending upon the number of leaflets in a compound palmate leaf they are further divided as:

The arrangements of veins in the lamina or leaf-blade is known as venation.

Veins are nothing but vascular bundles. Water and minerals absorbed by roots is conveyed to various parts of leaf by veins and the food synthesised by leaf by way of photosynthesis is translocated to other parts of plant through veins only. Veins also offer strength, support and shape to the lamina of the leaf. The prominent vein in the centre of the leaf is known as mid-rib. In the flowering plants two types of venations exist: 1. Reticulate, 2. Parallel.

(a) Unicostate – reticulate venation: Where the leaf contains only one mid-rib and several veins are given out on both the sides to form the network such as Henna, eucalyptus, peepal.

(b) Multicostate – reticulate venation: In this type many veins of equal strength arise from the end of the petiole. Each vein further branches to give rise to veinlets that form the network. The veins may be convergent (meeting at the apex) or divergent (diverge towards the margin) as in castor, Carica and cucurbita.

2. Parallel venation: In this type the vein and veinlets in leaf-blade are arranged parallel to one another. It is characteristic to monocotyledonous plants with few exceptions like Dioscorea and Sarsaparilla.

(a) Unicostate parallel venation: Wherein the leaf consists of only one midrib running from apex to the petiole of the leaf. The veinlets and veins arise parallel to one another on each side as in banana and canna.

It is the mode of arrangement of leaves on the stem:

Since the leaves are the chief organs of photosynthesis they must be exposed to sunlight favourably. This is done by arranging the leaves in systematic manner. Following are the various types of phyllotaxy.

1. Alternate or spiral: This phyllotaxy is characterised by the presence of one leaf at each node and all leaves together make a spiral path on the axis i.e. Tobacco, mustard and sunflower. 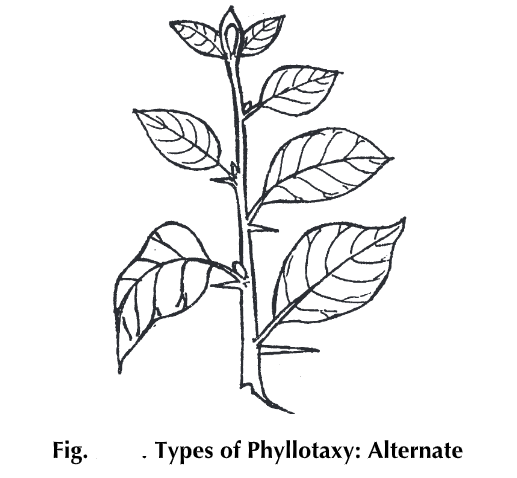 2. Opposite: When two leaves are placed at the same node and are opposite to one another. This is further divided into two: 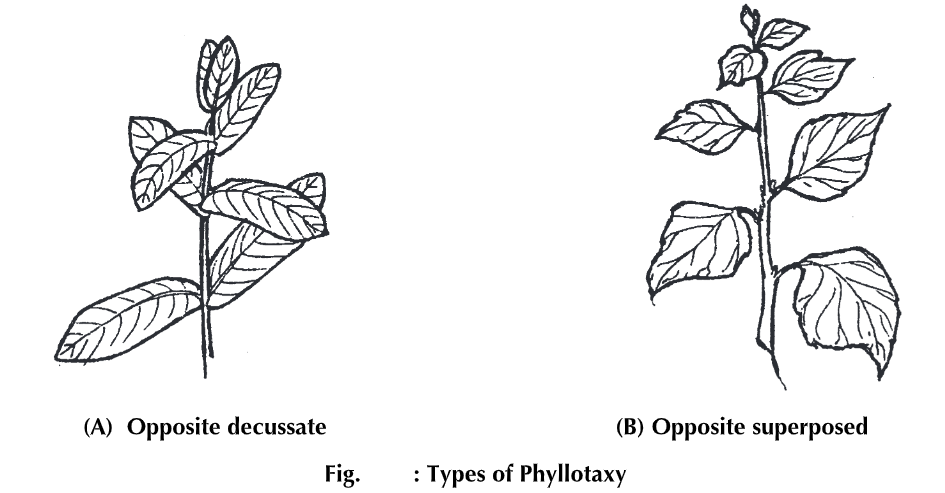 (a) Opposite decussate: In this type a pair of leaves of one node is at right angles to the pair of leaves at the next node such as maddar, sacred basil, vinca.

(b) Opposite superposed: When one pair of leaves is placed above the other exactly in the same plane, i.e. Rangoon creeper, ixora.

3. Whorled: When more than two leaves are present in a single node and are arranged in a circle as in Nerium, alstonia.

4. Leaf mosaic: In this type, the leaves are so arranged that there will not be any overshading and all the leaves are exposed properly. The older leaves have longer petiole while younger leaves have short petiole and are placed in the space left by the older leaves. It recalls the arrangement of glass bits in a mosaic and hence the name. Examples are Oxalis and acalypha. 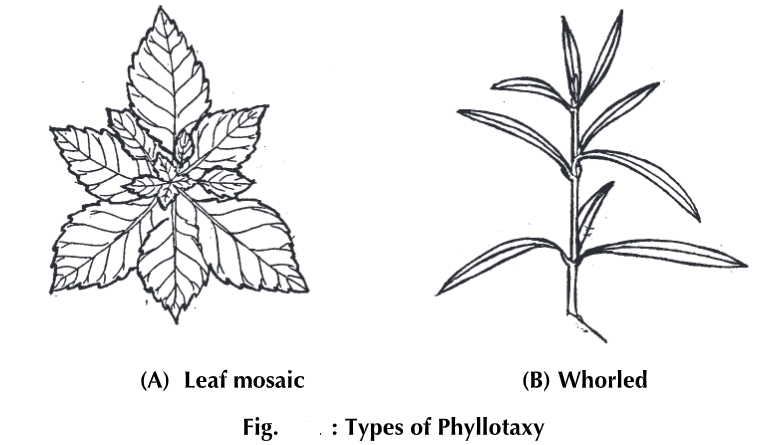 (i) Modifications of Leaves:

To perform these secondary functions the leaf undergoes structural and physiological changes called modifications. There are at least five types of leaf modifications known.

1. Leaf – tendrils: Leaves get modified into slender, coiled and wiry structures as seen in Lathyrus peas and gloriosa for support to the plant. 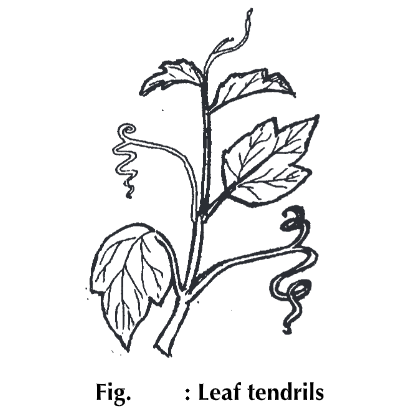 2. Leaf-spines: For the sake of protection certain leaves get converted into spines as seen in Aloe, argemone, acacia.

3. Phyllode: Petiole gets modified to flat leaf-like phyllode to reduce the transpiration. Example is Australian acacia.

4. Scale-Leaves: In ginger and potato they protect the terminal buds, while in onion and garlic they store food material.

5. Pitcher and bladder: These are specially developed modifications of leaves to capture and digest insects in case of carnivorous plants. Examples are (Utricularis) Bladder wort and Nepenthes. 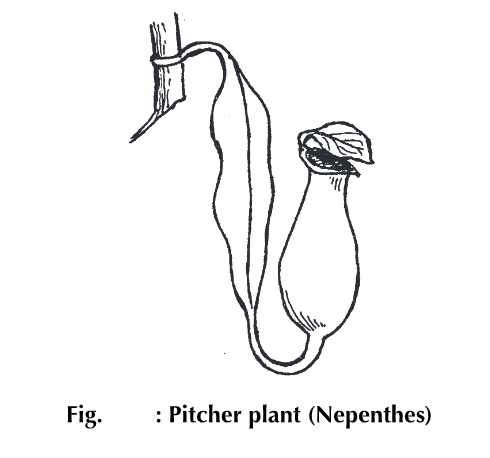