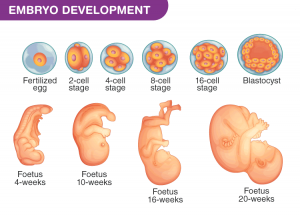 i) Morphological differentiation: By this process cells and tissue attain their characteristic shape and structure so that they may be distinguished from each other by their physical appearance and internal structure. For example, certain ectodermal cells become modified into nerve cells, others into epidermal cells or sensory cells. By morphological differentiation, each part of the body takes its characteristic shape, size, and structure.

Dedifferentiation or integration is a cellular process often seen in more basal life forms such as worms and amphibians in which a partially or terminally differentiated cell reverts to an earlier developmental stage, usually as part of a regenerative process. Some believe dedifferentiation is an aberration of the normal development cycle that results in cancer, whereas others believe it to be a natural part of the immune response lost by humans at some point as a result of evolution.

A small molecule dubbed reversine, a purine analog has been discovered that has proven to induce dedifferentiation in myotubes. These dedifferentiated cells could then redifferentiate into osteoblasts and adipocytes.

Regeneration: It is the process by which some organisms replace or restore lost or amputated body parts. Organisms differ markedly in their ability to regenerate parts. Some grow a new structure on the stump of the old one. By such regeneration, whole organisms may dramatically replace substantial portions of themselves when they have been cut in two or may grow organs or appendages that have been lost. Not all living things regenerate parts in this manner, however. The stump of an amputated structure may simply heal over without replacement. This wound healing is itself a kind of regeneration at the tissue level of organization: a cut surface heals over, a bone fracture knits, and cells replace themselves as the need arises.

In some cases, rather substantial quantities of tissues are replaced from time to time, as in the successive production of follicles in the ovary or the molting and replacement of hairs and feathers. In mammalian skin, the epidermal cells produced in the basal layer may take several weeks to reach the outer surface and be sloughed off. In the lining of the intestines, the life span of an individual epithelial cell may be only a few days.

The motile, hair-like cilia and flagella of single-celled organisms are capable of regenerating themselves within an hour or two after amputation.

Induction: Organs are complex structures composed of numerous types of tissues. In the vertebrate eye, for example, light is transmitted through the transparent corneal tissue and focused by the lens tissue (the diameter of which is controlled by muscle tissue), eventually impinging on the tissue of the neural retina. The precise arrangement of tissues in this organ cannot be disturbed without impairing its function. Such coordination in the construction of organs is accomplished by one group of cells changing the behavior of an adjacent set of cells, thereby causing them to change their shape, mitotic rate, or fate. This kind of interaction at close range between two or more cells or tissues of different history and properties is called proximate interaction or induction. There are at least two components to every inductive interaction. The first component is the inducer, the tissue that produces a signal (or signals) that changes the cellular behavior of the other tissue. The second component, the tissue being induced, is the responder. The chemical substance that is emitted by an inducer is called morphogen.

Organizer: The organizer is an embryonic tissue that organizes the surrounding tissues to develop an embryo or organizers at present recognized as embryonic tissues that influence and organize other tissues to differentiate and produce tissue or structure that in the normal course should not have been formed. This process is known as induction and the tissue producing this effect is the organizer. The organizer has the ability for self-differentiation and organization. It also has the power to induce changes within the cell and to organize surrounding cells, including the induction and early organization of neural tube. The primary organizer determines the main features of axiation and organization of the vertebrate embryo. When the organizer tissue is destroyed, the embryo dies. When an additional organizer is transplanted, two embryos are produced.

It is the ability of a cell or cell group to give origin to all or nearly all the different cells and tissues including the placental tissue of the particular species to which it belongs. In mammals, only the zygote and subsequent blastomeres are totipotent,

Fate-map: A chart or topographical surface mapping showing the fate of each part of an early embryo, in particular, a blastula is called a fate map.