During the development of chick and other vertebrates, there are produced certain tissues or structures that temporarily or permanently do not enter into the formation of the embryo themselves, but are external to and devoted in one way or another to the care and maintenance of the developing embryo. Collectively these parts are termed as foetal membranes, extra-embryonic sacs or extra-embryonic membranes.

During the chick development following extra-embryonic membranes are developed:

i. Amnion or amniotic sac: which surrounds the embryo and provides a kind of private aquarium to protect it from mechanical shocks (such as pressure, abrasion, irritation) and desiccation.

ii. A serosa or chorion: which forms the outermost membrane surrounding the rest of the embryonic system.

iii. A yolk sac: which is filled with the yolk of the egg functions as the first respiratory organ and as a digestive organ for the embryo. It also acts as a haemopoetic organ like the liver and at later stages serves as a place of origin of blood cells.

iv. An allantois: which is a precocious urinary bladder by origin, accumulates the embryonic nitrogenous wastes (non-toxic uric acid) and also acts as an embryonic respiratory surface.

During neurulation of chick, the lateral plate mesoderm splits into an outer somatic layer of mesoderm lying at the inner side of the ectoderm and an inner splanchnic layer of mesoderm lying outer to the endodermal layer. Both mesodermal layers enclose a coelomic space between them. The somatic layer of mesoderm and ectoderm are collectively known as somatopleure, while splanchnic layer of mesoderm plus endoderm form the splanchnopleure. During later developmental stages, the somatopleure and splanchnopleure gradually spread peripherally over the yolk mass far beyond the area where the body of the embryo is taking form. As the body of the embryo grows, it becomes separated from the extra-embryonic membranes by the appearance of limiting folds or sulci – the cephalic, the caudal and the lateral – limiting folds. Thus, in the anterior region of growing embryo the limiting folds that roll under the head area appear, separating it from the underlying yolk and forming subcephalic pocket. Eventually, similar folds develop on either side of body (the lateral folds) undercutting it laterally. Posterior limiting folds (the caudal folds) form about third day of incubation and lift the tail region from the surrounding yolk area. As a result, the subcephalic, lateral and subcaudal folds define the body of embryo and separate the embryonic from the extra-embryonic region: 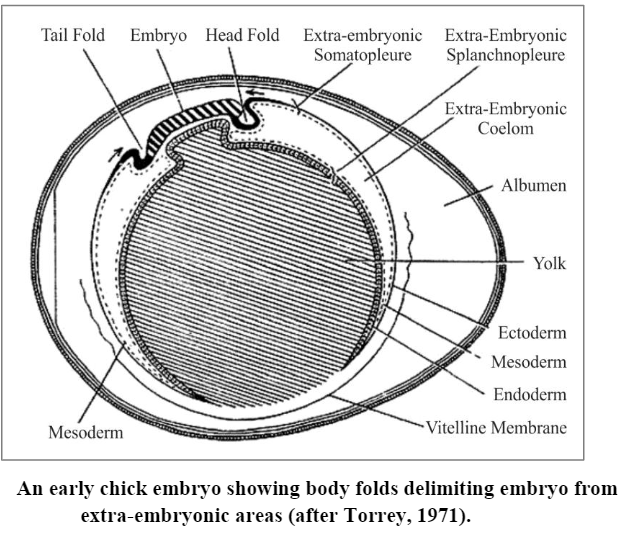 Now onward, the somatopleure and splanchnopleure develop into four extra-embryonic membranes of chick by following methods:

During neurulation, the gut region of embryo has a dorsal roof and side but no floor. The ventrally open gut rests on the yolk mass. The splanchnopleure which remains closely applied to yolk, extends peripherally and eventually surrounding the entire yolk and form yolk sac. Yolk sac is the first extra- embryonic membrane to form. Later on, as the undercutting folds move toward one another, they establish a floor to the gut except for a small region of the midgut. These folds do not completely merge, but a small aperture, the yolk duct, remains open into the yolk sac. Once a completely walled gut is formed in the embryo proper, the yolk sac cavity remains in continuity with the gut cavity through the yolk duct which runs in the yolk stalk of yolk sac. Despite that fact that the yolk sac is connected to the digestive tract by the yolk stalk, the yolk food reserves are not transmitted to the embryo by this route. Rater the endodermal surface of the yolk sac is thrown into folds(yolk sac septa) that penetrate the yolk mass and through the mediation of appropriate digestive enzymes produced by the endodermal cells, the yolk is digested or made soluble and ultimately is absorbed by the endodermal lining of yolk sac and transported to the embryo by vitelline vein. As by now, a rich blood circulation develops within the mesodermal component of the yolk sac and the vitelline arteries and veins (the so called omphalomesenteric blood vessels) traverse the yolk sac. The constriction of the yolk stalk region brings together the vitelline blood vessels (two arteries and two veins) located in the splanchnic mesoderm of both sides of the embryo. Thus, digested yolk is collected by left and right vitelline veins, both of which open into an unpaired ductusvenosus which ultimately opens into sinus venosus of the heart. The yolk, however, is completely absorbed during embryonic life. Shortly before hatching the yolk sac is retracted into the abdominal cavity of the embryo, and the walls of the abdominal cavity close behind it. 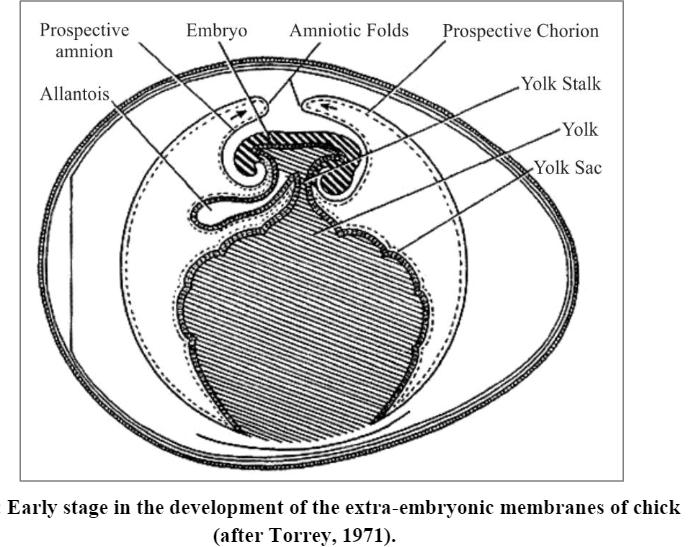 a) The yolk sac which spreads over the large amount of yolk, serves as the digestive and absorptive organ by which the yolk is made available for the growing embryo.

b) It functions as the first respiratory organ.

c) It acts as a haemopoetic organ like the liver.

d) The yolk sac also serves as the place of origin of blood cells, at later stages of development.

2. Development of amnion and chorion:

The origin of amnion and chorion is considered together since they are formed simultaneously from the extra-embryonic somatopleure. About the 30 hours of incubation, the extra-embryonic somatopleure is elevated over the embryo by a folding process consisting essentially of a doubling of the somatopleure upon itself. The initial elevation is over the head end of the embryo, producing a double somatopleuric hood, called cephalic amniotic fold. As the cephalic amniotic fold gradually extends backward, its caudally extending side limbs called lateral amniotic folds arch over the embryo from each side to be joined finally by a similar fold or elevation over the tail, the caudal amniotic fold. All these amniotic folds ultimately converge, so as to encase the embryo in two sheets of somatopleure from all sides except the region of yolk stalk. The region where the union of amniotic folds occurs is called seroamniotic connection. The point of fusion of the folds leaves a scar, called the seroamniotic raphe. According to Bodemer (1968), the seroamniotic connection opens before the hatching of embryo and admits albumen into the amniotic cavity, where it is swallowed by the developing chick embryo. 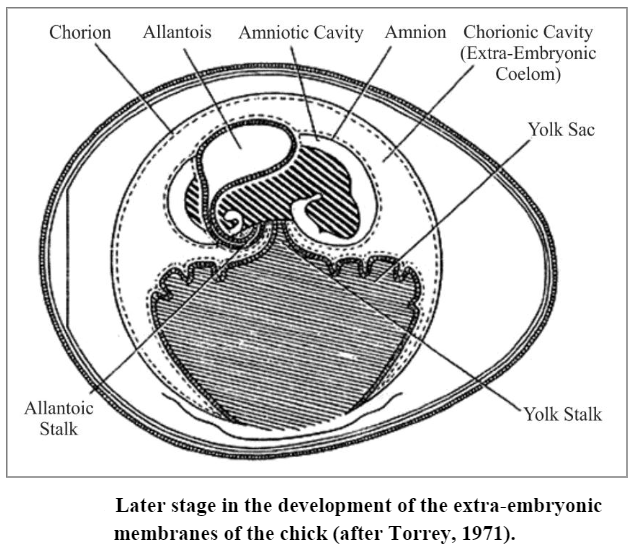 i. The embryo becomes immersed in a container filled with salty fluid and, thus, can accomplish its development in a fluid medium, although the egg is “on dry land”. Thus, the primary function of amnion is protection of embryo from the danger of desiccation. 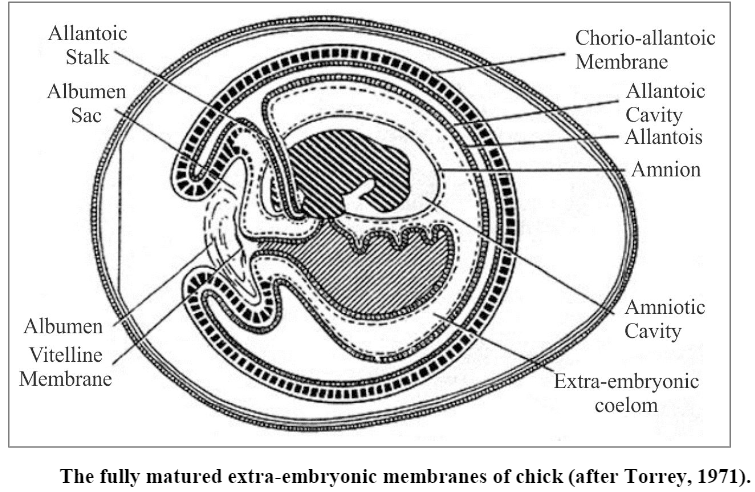 ii. The fluid of the amniotic cavity is an efficient shock absorber and protects the soft, collapsible and almost skeletonless early chick embryo from the mechanical shocks.

iii. Ammion isolates the embryo from the shell of the egg, and, thus, protects it from adhesion to the shell or from friction against it.

iv. During later developmental stages, the mesoderm of amnion forms muscle cells which contract rhythmically, thus, rocking the embryo within the amniotic fluid. The rocking results in the circulation of the amniotic fluid that moves the parts of the embryo about and prevents them from growing together. It is also instrumental in preventing its adhesion to the different embryonic membranes. It may also help to obviate the stagnation of blood in the vessels, a condition which might tend to occur on account of the pressure from the growing organs.

According to Balinsky (1970), the formation of the amniotic cavity has a slightly negative effect because it removes the embryo from the surface of the egg and from the source whence it could obtain oxygen. The chorion later on joins the allantois to serve in a capacity of respiratory and nutritional organs.

About the third day of incubation, the region of the future floor of endodermal hindgut begins to bulge as precocious urinary bladder, the allantois. Allantois, thus, corresponds exactly in its nature to the urinary bladder of Amphibia. The allantoic outgrowth (or evaingation) consists of endoderm with splanchnic or visceral mesoderm layer covering it from the outside (i.e., splanchnopleure). It grows very rapidly and soon penetrates into the extra-embryonic coelom, the space between the yolk sac, the amnion and the chorion. The distal part of the allantois expands and remains connected with the hindgut of the embryo by means of a narrow allantoic stalk. When the body folds contract, separating the embryo from the extra-embryonic parts, the allantoic stalk is enclosed together with the stalk of the yolk sac, forming an umbilical cord.

As the allantois vesicle enlarges and spreads outward, its distal part becomes flattened and penetrates between the amnion and yolk sac on one side and the chorion on the other side. Due to this, the splanchnic mesoderm comes in contact with the somatic mesodermal lining of chorion. Both mesoderms fuse to form a single mesodermal membrane called chorioallantoic membrane. In the meantime, the expanding chorio-allantois bursts through the vitelline membrane of egg and pushes outward toward the shell membrane. As it does so, it progressively envelops the albumen and so becomes a sac filled with albumen and called albumen sac. It aids in absorption of water and albumen.

A network of blood vessels develops on the external surface of the allantois (i.e., in chorio-allantois) and this network is in communication with the embryo proper by blood vessels (arteries and veins) running along the stalk of the allantois and through the umbilical cord. The chorio-allantoic circulation continues until the young chick breaks the egg-shell and begins to breath the surrounding air. Then the umbilical vessels close, the circulation ceases, and the allantois dries up and separates from the body of the young chick. At the time of hatching, the allantoic vesicle with its contents (i.e., the uric acid) is detached from allantoic stalk left attached to the broken shell.

Functions of allantois. The allantois serves following functions for the embryo:

i. It acts as a reservoir of embryonic excretory wastes such as uric acid.

ii. The chorio-allantoic membranes of allantois and chorion act like a respiratory surface for the embryo.

Thus, the four extra-embryonic membranes are devices which provide adequate nutrition, protection, and satisfaction of metabolic requirements to the developing chick embryo.

Significance or uses of chick-embryology in developmental biology

Some of the reasons for the importance of this, in the first place the material is usually easy to obtain and observe throughout most of the developmental stages. Furthermore, unlike the Frog or Fish, the Chick embryo, in common with those of other Birds as well as with those of Reptiles, possesses certain very significant extra-embryonic membranes and appendages. The significance of these structures Lies not only in their character and functions in the groups just cited, but also in the fact that the same appendages and membranes occur also in the Mammals, though in a somewhat modified condition. Lastly, aside from the features already indicated, the general development of the Chick is more nearly mammalian than that of any of the forms previously considered.