According to “Balinsky”, the process of gastrulation is one of displacement of part of blastoderm of an early embryo. As a result, the endodermal and mesodermal organ rudiment are removed from the surface of the blastula and brought into interior of the embryo, where the respective organs are found in the differentiated animal. Thus, the single layer of cells, the blastoderms given rise to three germ layers 1.e. ectoderm, endoderm and mesoderm.

Gastrulation may be defined as the dynamic process during with major presumptive organ forming areas of blastula becomes arranged and recognized in way which permits their ready conversion of body plan of particular species.

1) The rhythm of cellular division is slowed down.

2) A rearrangement of blastomeres of embryo by means of morphogenetic movements.

3) The type of metabolism changes and the rate of oxidation is intensified.

4) The nuclei become more active in controlling the activities of embryonic cells.

5) During gastrulation chemo differentiation is started by the synthesis of new and different kinds of protein molecules.

Gastrulation is a nicely integrated, dynamic process which is controlled largely by intrinsic forces bound up in the specific physico-chemical conditions of the various presumptive organ forming areas of the late blastula and early gastrula. These internal forces in turn are correlated with external conditions. In most vertebrates. it includes different kinds of morphogenetic movements.

The following two basic types of morphogenetic movement patterns are involved in gastrulation:

The word epiboly is derived from the Greek, meaning a “throwing on” or “extending upon”. It represents the natural tendency of epithelial sheet to expand into free areas over a substratum. Epibolic sheets are usually outside, or ectodermal, and tend to envelope and surround inner sheets. Sometimes sheets expand toward a single point on the surface. This type of epibolic movement is called convergence (see Grant, 1978).

In Ctenophora, in various spirally cleaving eggs (e.g., Annelida and Mollusca), and in some vertebrata (Pisces), a modified type of epibolic movement called epiauxesis occurs (Lovtrup, 1974). Four conditions must be fulfilled for epiauxesis to occur, namely, absence of a hyaline membrane, presence of a surface to which the blastomeres adhere and on which they may spread, a certain intercellular adhesion and that they are mitotically active. In Annelida and Mollusca epiauxesis involves overgrowth of ectodermal (micromeres) over yolk-laden vegetal pole cells (macromeres). Overgrowth of micromeres not only depends upon the subdivision of the existing micromeres, but also upon the addition of new ones budding off from macromeres.

Convergence is the actual migration of cells from the outer surface of the blastula to the external margin of the blastoporal lip. During gastrulation the process of convergence and involution, go simultaneously. If the involution is not there, the converging cell would tend to pile up along the outer edge of blastopore lips.

This is just opposite to epiboly. In emboly, sheets fold in or invaginate; that is, a sheet migrates inside a cell aggregate or beneath another layer because of local changes in cell shape or motility. Embolic movements include invagination, involution and ingression, movements displacing future or prospective endoderm and mesoderm into the interior of the embryo.

1) Invagination: It is the sinking in (in pocketing) of a layer of cells and is similar to punching in of an expanding layer at a specific point. The reverse of invagination is evagination.

2) Involution: It is turning in of an expanding layer at a specific point. In involution, a surface layer of cells turns inside itself and continues to expand along the inner surface of the superficial layer. Thus, in involution, cells which are at some distance from the point of invagination, move to the margin of the site of invagination (e.g., at a lip of blastopore during amphibian gastrulation), flow over it and move inside.

3) Ingression or poly invagination: In this type of emboly, small groups of independent cells separate from a primary epithelial layer and migrate into the blastocoele cavity or other embryonic spaces as a new layer. For example, in primitive streak of amniote embryos, cells may sink inside as individuals, changing their relations to each other in the process.

Infiltration: It occurs during the development of endoderm in amniotes. Individually cells detached themselves from the surface of blastoderm and fall into primary blastocoels. Here they arrange themselves to form a layer of endoderm cells.

Delamination is a type of ingression that forms an inside sheet by mass separation of a layer of cells from an epithelium. Sometimes, this process is accomplished by division of cells in a plane parallel to a tissue space.

It is opposite of convergence. For example, after cells have involuted over the blastoporal lips during gastrulation, they migrate and diverge to their future positions within the developing embryo. Such divergence occurs in lateral plate and ventral mesoderm in frog; and in lateral plate and extra-embryonic mesoderm in reptiles, birds and mammals.

Gastrulation in an Isolecithal Egg

Gastrulation in a Moderately Telolecithal Egg 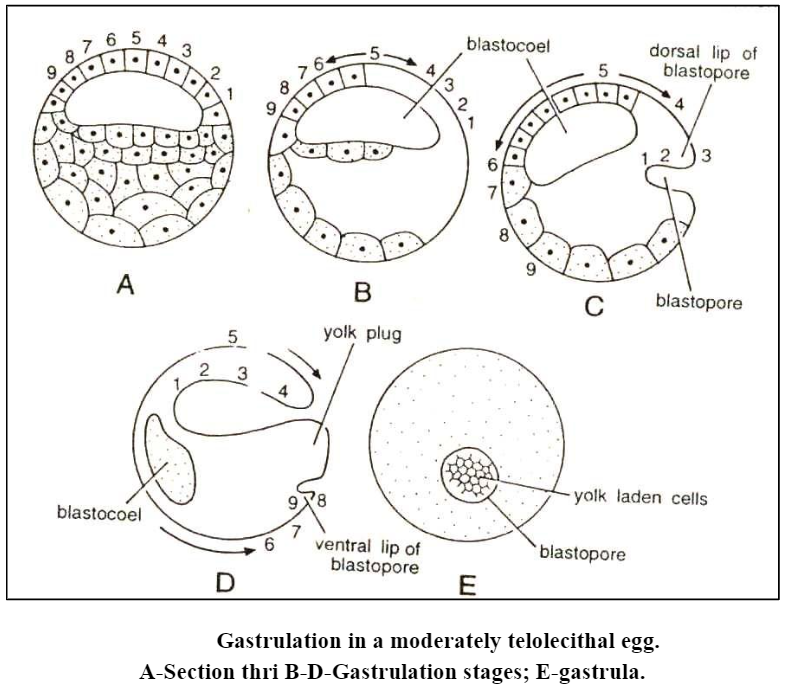 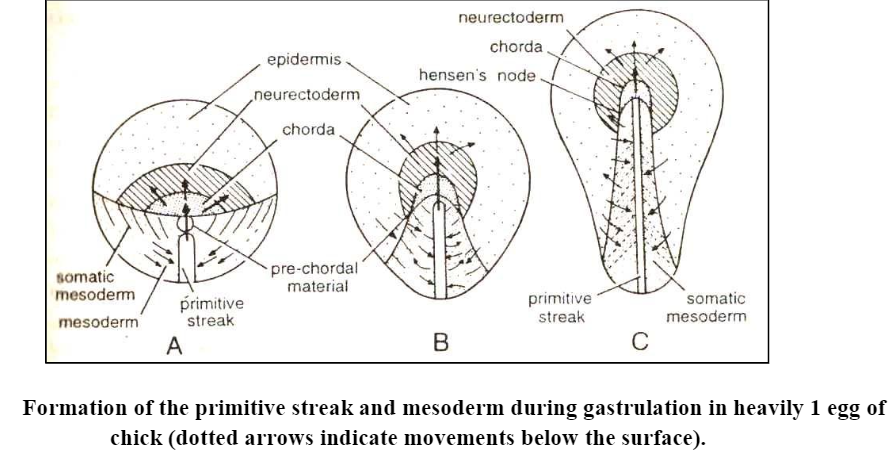 Gastrulation in a Heavily Telolecithal Egg 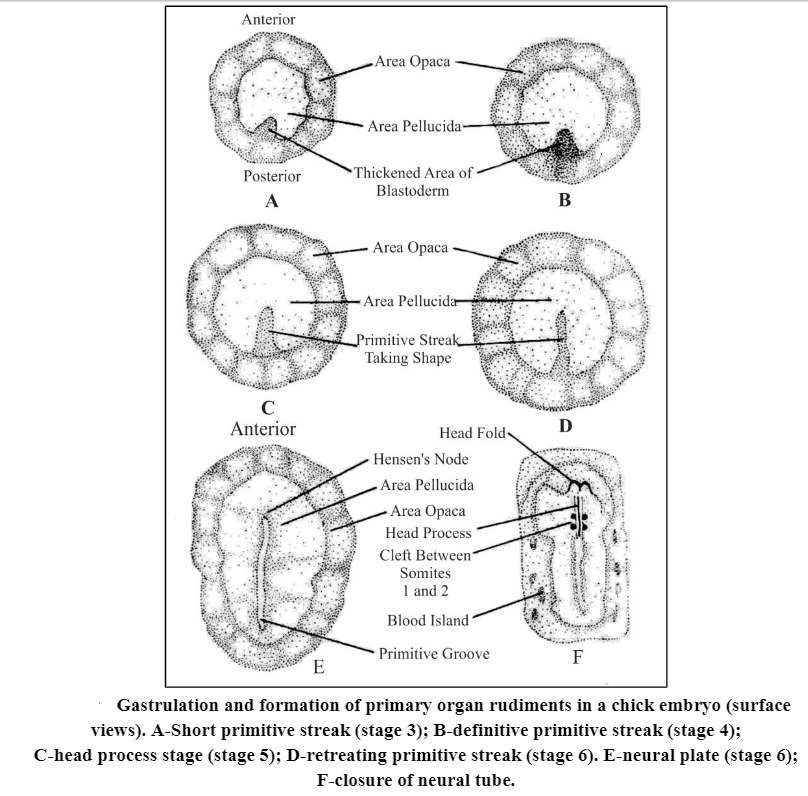 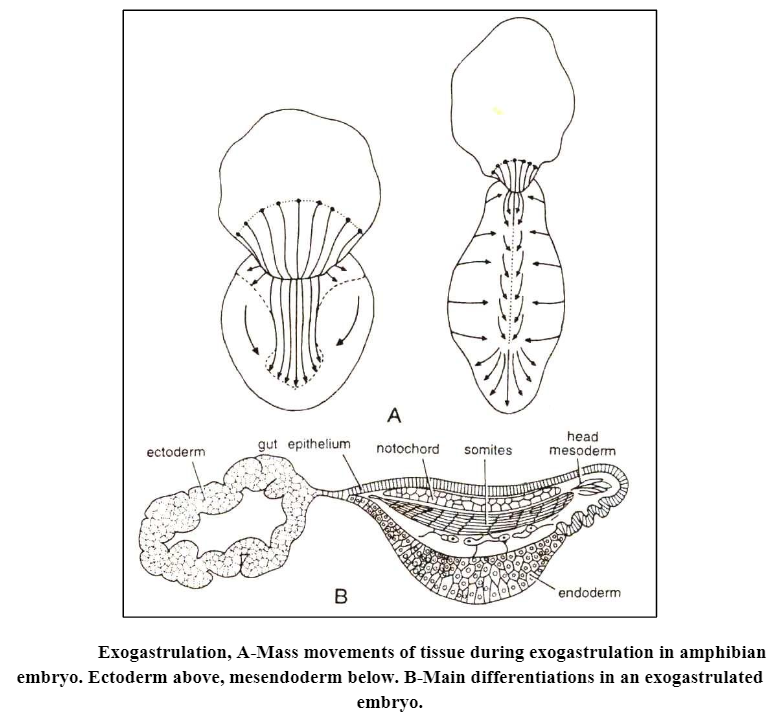 (1) It brings the presumptive structures from a position on the external surface of the blastula into their normal positions in the embryo.

(2) It is necessary for the formation of the nervous system. This can be proved by producing abnormal gastrulae called exogastrulae of frogs. In some amphibian eggs, if the outer protective membranes are removed, the eggs form exogastrulae. In an exogastrula, the endodermal and mesodermal blastomeres evaginate (viz. grow outward) rather than invaginate and the mesoderm and endoderm are not covered with ectoderm, the ectoderm remains isolated from the rest of the tissues.