Tissues of the Human Body

A tissue is a group of cells having a common embryonic origin that functions together to carry out specialized activities. Tissues may be hard (bone), semisolid (fat), or liquid (blood) in their consistency. Tissues may vary with respect to the types of cells present, their arrangement, and the type of fibres present.

It is the branch of science that deals with the study of tissues.

According to the structure and functions, tissues can be divided as follows:

(2) Connective tissue: It protects and supports the body and its organs. It acts as an energy store (reserves fat) and provides immunity.

(4) Nervous tissue: It detects the changes inside and outside the body environment and generates nerve impulses responsible for muscular contractions and glandular secretions.

It is made up of a single layer of cells and is divided into four types: 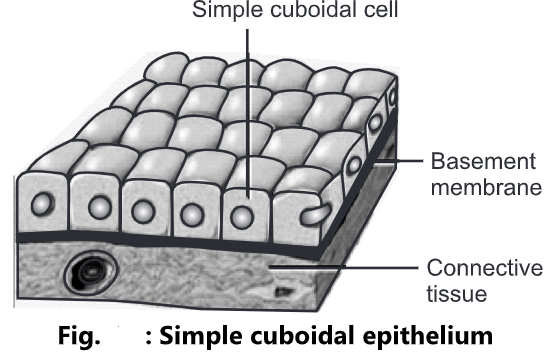 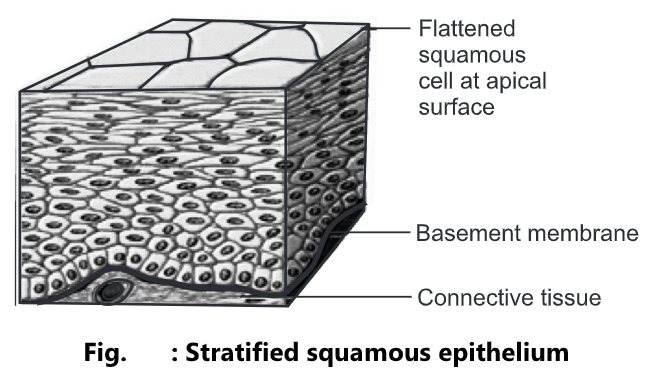 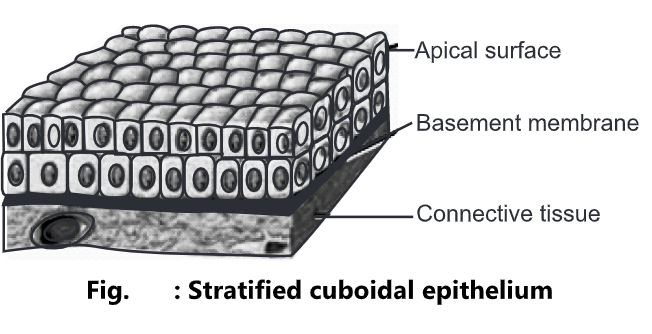 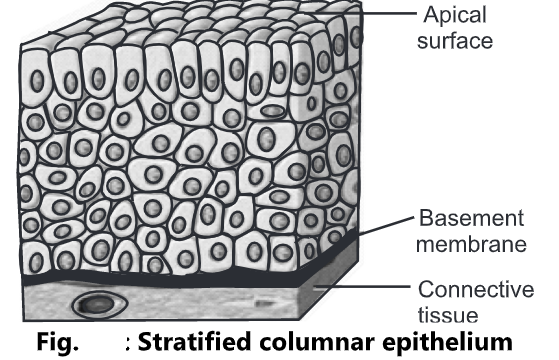 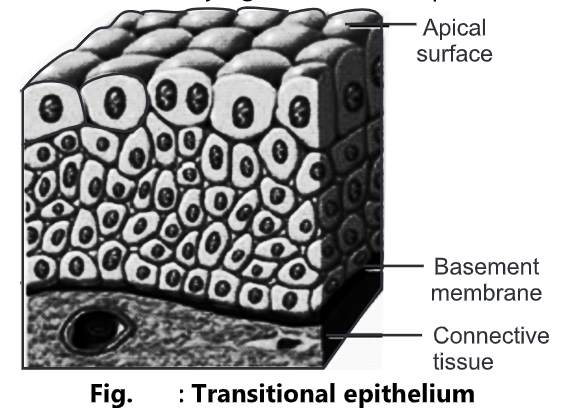 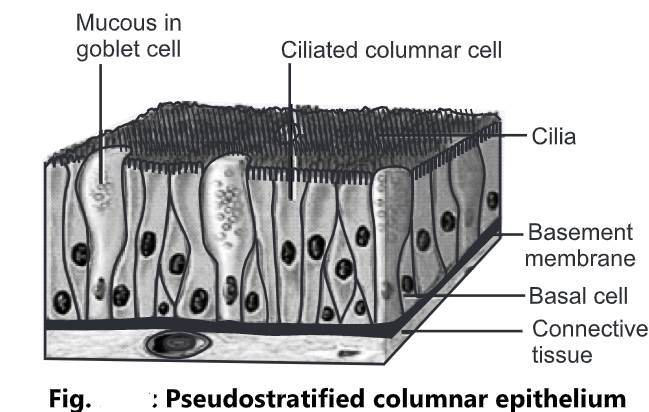 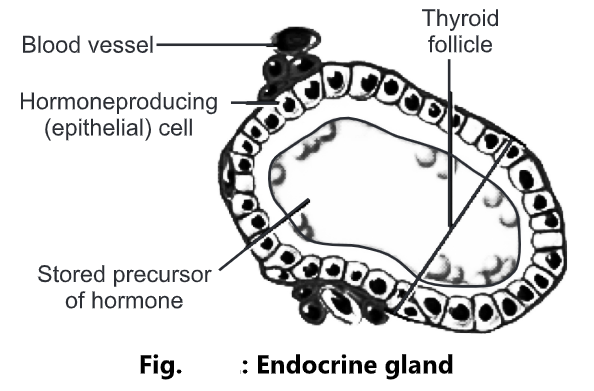 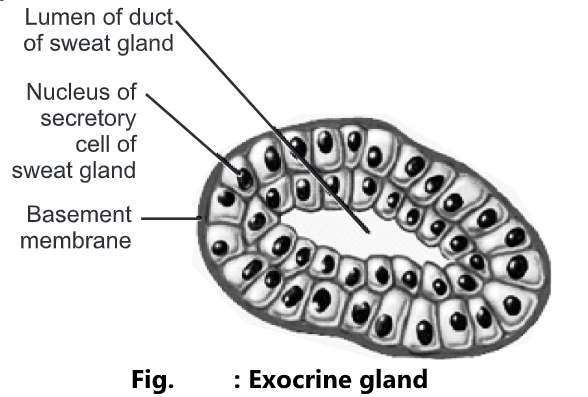 On the basis of the structure of their ducts, multicellular exocrine glands are classified as:

Simple gland: If the duct of the gland does not branch it is called a simple gland.

Tubular gland: If the duct of the gland is tubular in shape it is called a tubular gland.

Acinar gland: If the duct of the gland is rounded it is called as acinar gland.

On the basis of their secretory unit, multicellular exocrine glands are classified as; 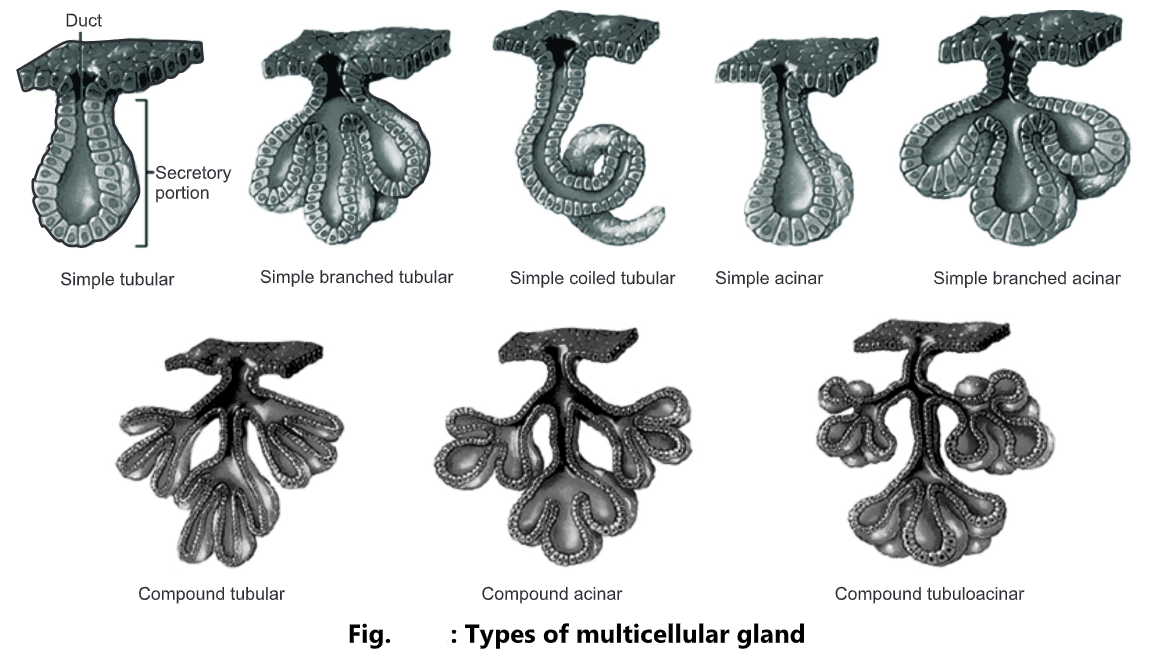 Three types of fibres are embedded in the extracellular matrix between the cells.

These are very strong and allow tissue flexibility. These are made up of protein collagen. It is the most abundant protein making up about 25% and 35% of the total body protein. Collagen fibre is often presented in parallel bundles. It is found in bone, cartilage, tendons and ligaments.

These fibres are smaller in diameter. These are made up of protein elastin surrounded by a glycoprotein named fibrillin which gives strength and stability to tissue. Elastic fibres have the ability to return to their original shape, a property called elasticity. These are found in the skin, lungs, arteries, veins, elastic cartilage, periodontal ligament and foetal tissue.

They consist of collagen protein arranged in fine bundles covered with glycoprotein. These are much thinner than collagen fibres. They give support and strength. These are found in the liver, bone marrow and lymphatic organs.

They are the chief cells of connective tissue. They are large, flat cells with branching processes.

These cells develop from monocytes, a type of white blood cells. There are two types of macrophages. These cells play an important role in the immune response. Fixed macrophages are present in particular tissue such as alveolar macrophages in lungs or spleen macrophages in spleen. Wandering macrophages have the ability to move throughout the tissue and gather at the site of infection to carry phagocytosis.

A small cell that develops from a type of white blood cell is called β-lymphocytes. It takes an important part in the immune response. They are present in the gastrointestinal and respiratory tract, salivary glands, lymph nodes, spleen and red bone marrow.

They produce histamine that dilates the small blood vessels as a part of the inflammatory response.

These are also called fat cells or adipose cells. They store fats. They are found deep in the skin and around the heart and kidneys.

In response to the inflammatory reaction, they migrate from the blood into connective tissue. E.g. Neutrophils gather at sites of infection and eosinophils migrate to the sites of allergic response. 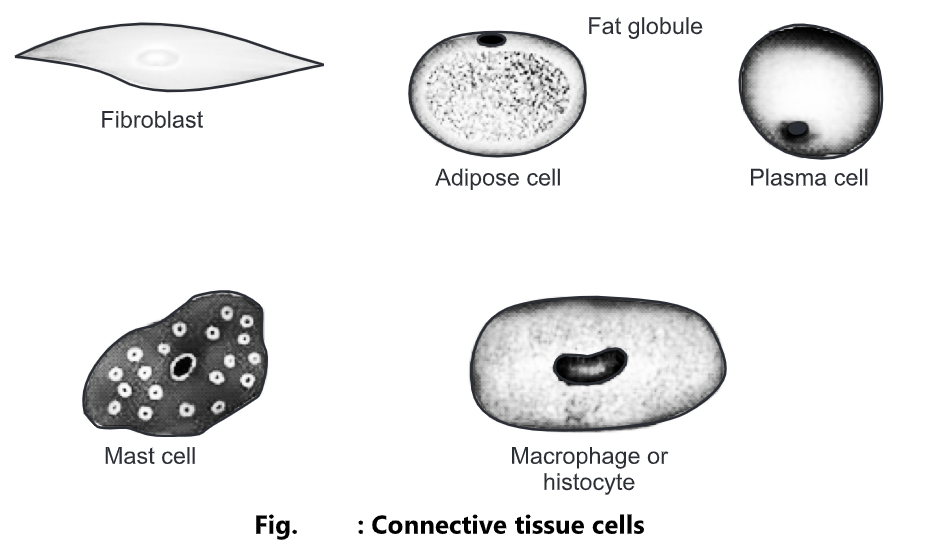 Types of Connective tissues are as follows: 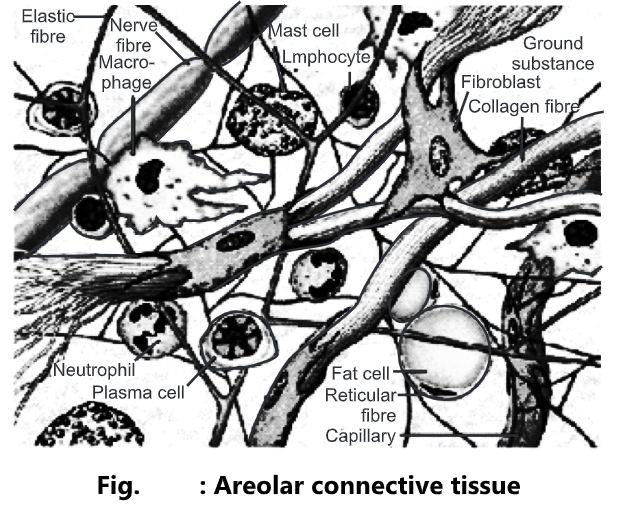 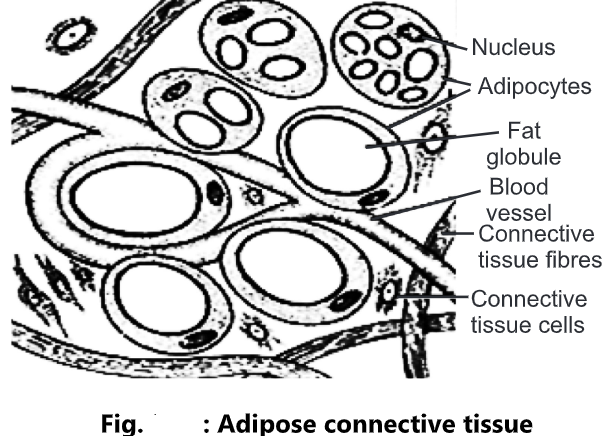 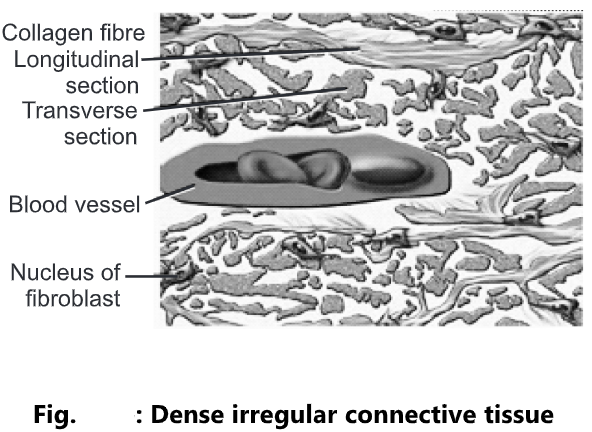 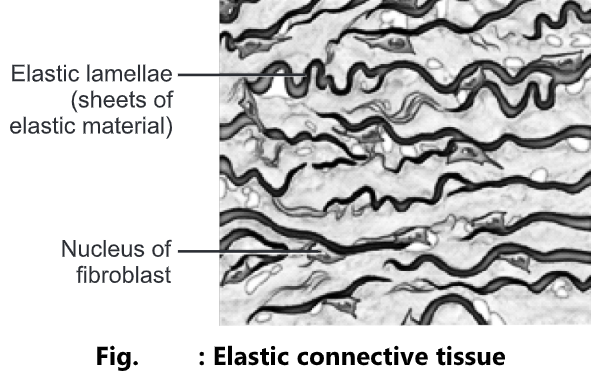 It consists of a network of closely packed collagen fibres and elastic fibres embedded in a gelatinous substance called chondroitin sulfate of the ground substance. The cells of mature cartilage are called chondrocytes. 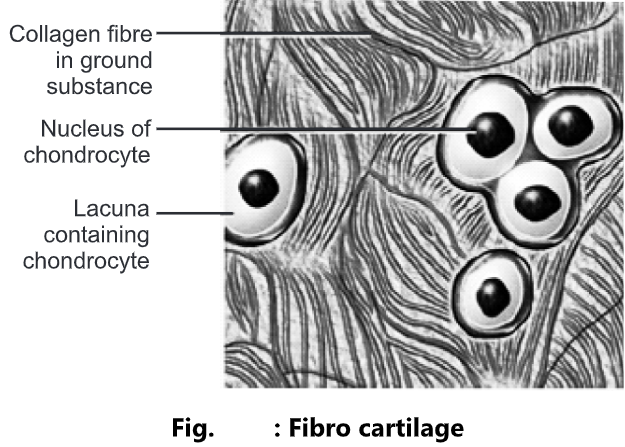 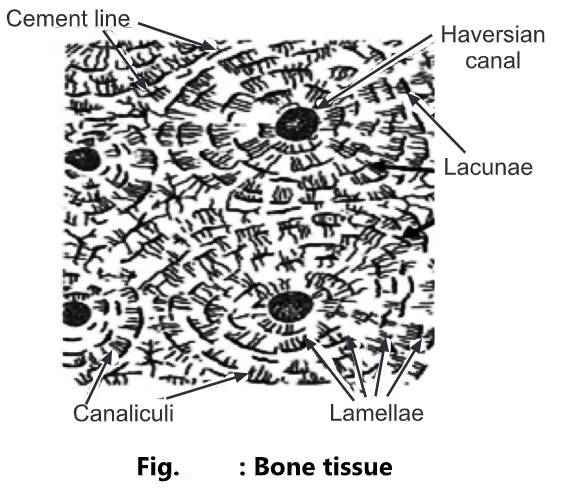 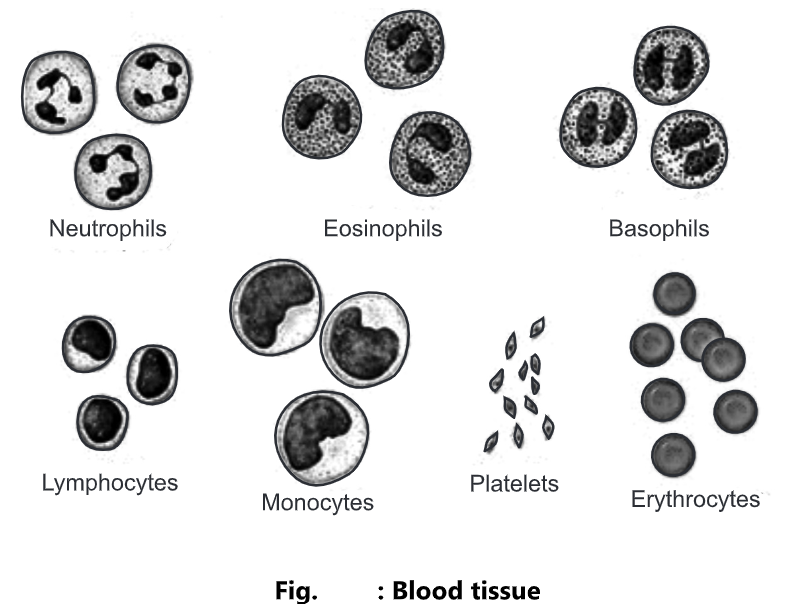 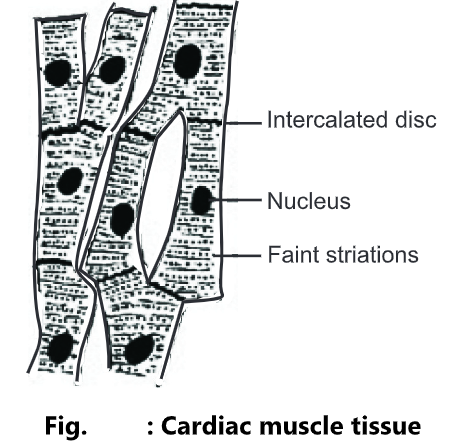 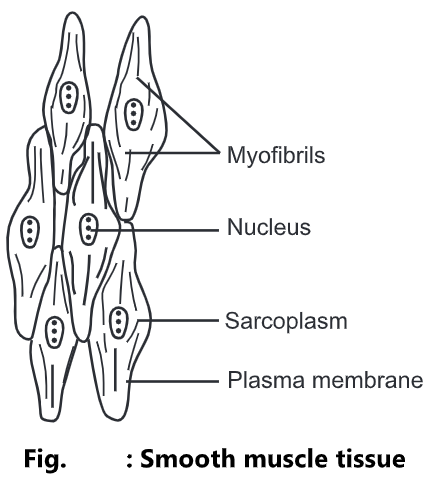